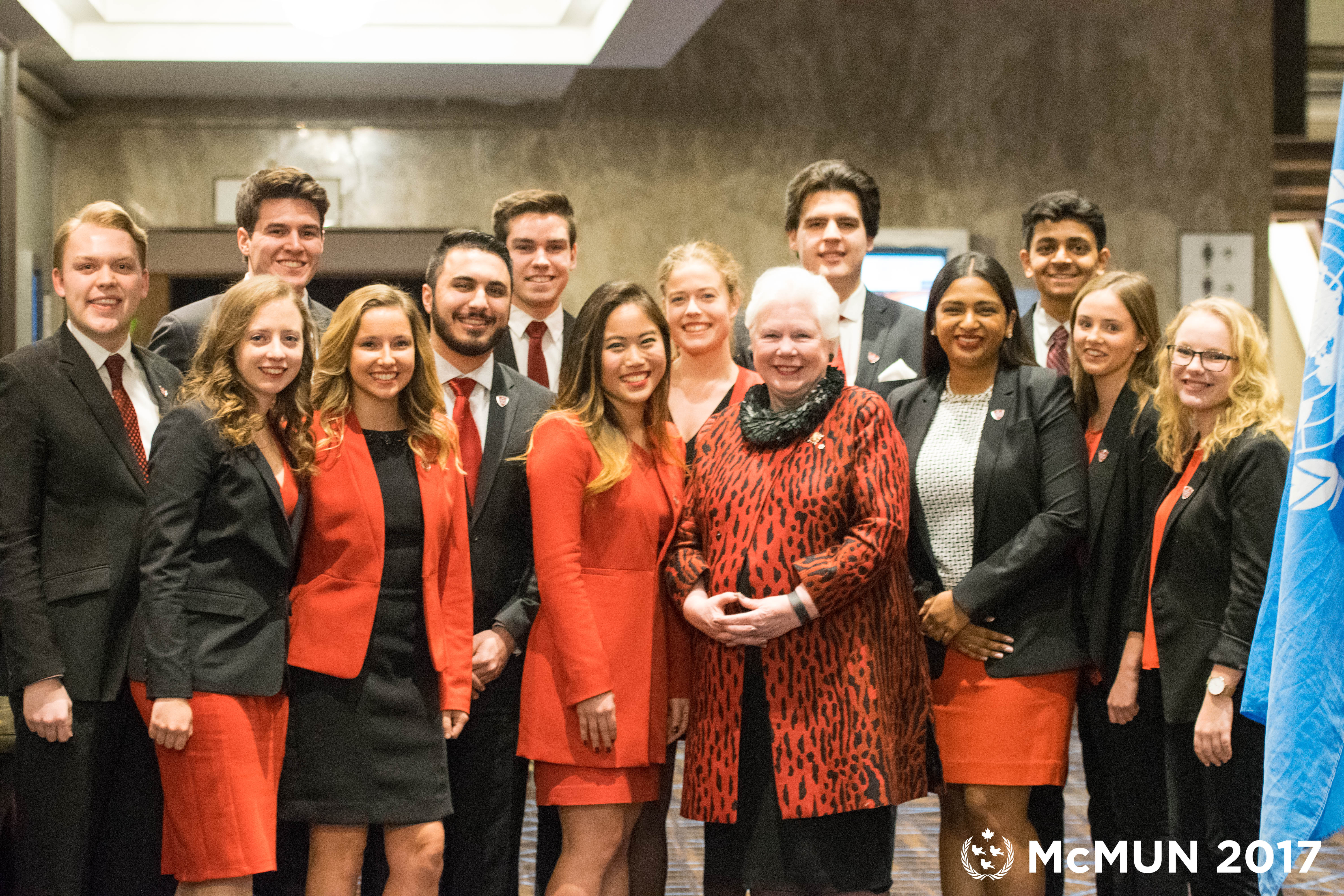 With the words ”je suis ravi d’etre avec vous ce soir,” The Honourable Elizabeth Dowdeswell, opened her address as the Keynote Speaker of McMUN 2017. Having served as the Executive Director of the United Nations Environment Programme (UNEP) and Under-Secretary-General of the United Nations, this year’s speaker was not only a UN executive but a role model as well.

The delegates followed attentively as the the Lieutenant Governor of Ontario dwelled upon the opportunity to speak at McMUN, saying that it had ”provided her with a chance to reflect on the current state of affairs.” What followed was not merely a reflection but also a strong reminder on the importance of staying positive. Being a self proclaimed “perpetual optimist,” she brought up issues such as reconciliation with Canada’s indigenous population and the complications associated with nuclear weapons, while emphasizing the value of staying positive.

The emphasis on maintaining a positive outlook was one of many indications of a speech directed at conveying a message to a younger generation. It was clear that Dowdeswell saw this as an opportunity to have an impact on the future. Indeed, she told the delegates “that they will have conversations advancing this cause,” that cause being building a better future. Further appealing to a young audience, the Honourable speaker made several references to pop culture. Saying that ”More than any other time in history, mankind faces a crossroads,” she cited Woody Allen’s 1979 ”My Speech to the Graduates.”

The crossroad she continued to outline was very much focused on climate change. While acknowledging the difficulties related to the debate on climate, the Lieutenant Governor referred to sustainability as the “right place to start.” Despite speaking on a much-debated topic, the former UNEP Executive Director managed to contribute with some fresh perspective. Especially compelling was her point on including citizens in the climate debate. This aligned well with Secretary General Ginny Tan’s description of McMUN as a forum to “vouch for life and liberties of people we will never meet” in her preceding speech.

Reaching the end of her speech, the Lieutenant Governor told a story about attending a conference in Belfast with Bono. Prior to the conference the Irish singer had replaced street signs around the city with signs reading “the way ahead not closed.” Providing a sharp contrast to the detour signs currently populating McTavish, the Lieutenant General concluded on a positive note.

The applause following the address spoke of a message well received and when delegates were asked to give a comment on the opening ceremony, the address of the keynote speaker was frequently mentioned. Delegates praised the speaker for balancing optimism and pragmatism and described the Lieutenant Governor as inspiring and passionate.