The Way Back from Islamic Extremism Starts with the West 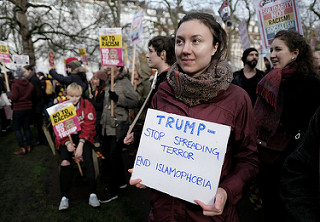 The loss of life outside of Westminster on the 22nd of March is a sight which unfortunately now summons feelings of déjà vu. When reports came of Khalid Masood running his car into casual bystanders, killing 3 and hospitalizing dozens more before fatally stabbing a police officer, the attacks in Nice, Paris, Brussels, and Berlin all flooded to the forefront of the collective thought and conversation. In 2016, the number of people dead from attacks marked as acts of terrorism hit a 12-year high, and Europe has struggled with how to respond. The primary response around the Western world has been to make a call to arms for stronger borders, whether it be Donald Trump’s attempts at a Muslim ban, Brexit’s plan for tighter borders, or the rhetoric from the front-runner in France’s election, Marine Le Pen.

A national security response solution to the terror problem may be fruitless. The Westminster attack was only the third terror attack to occur on British soil in the last 15 years. It was also the third in the last 15 years to be committed by a British-born citizen. This is a trend we have seen across Europe. The majority of the Paris attackers in November 2015 were born in either France or Belgium, and all of the perpetrators of the airport attack on Brussels were born or raised in Belgium. The notion that terrorism is flowing over Western borders in droves is a fallacy. Tighter borders would have done very little to stop these attacks and these examples are only a microcosm of where the problem with extremism truly lies.

The Atlantic reported that, since 9/11, of the individuals who were charged with or died committing jihadist terrorism inside the United States, over 80% were US citizens or permanent residents. In a study done by Edwin Bakker, a professor at Leiden University, it was found that of 219 jihadi extremists who were surveyed, only 8 resided outside of Europe before engaging in terrorist acts within Europe. Additionally, of the surveyed group more than a third were born in Europe, while a majority had lived in a European country for more than 10 years before committing their attack. An important question to ask is: Why, then, do these people commit such atrocities? Why would one level such an attack on a place that one would call home, against people who they’ve grown and lived with?

While highlighting the fact that jihadi terrorism is now grown domestically as a result of technological advances and online extremist propaganda, propaganda as the sole explanation for radicalization seems like a very shallow analysis. When you read about Khalid Masood, a picture is painted of a man who was a fairly standard British schoolboy. He was born named Adrian Russell Ajao, labeled as popular by former classmates, and described as someone who “liked to party.” The picture painted doesn’t resemble one of a man who would go out of his way to search for extremist propaganda. So how did he land in such a position?

Sarah Lyons-Padilla, a Stanford research scientist who specializes in social and cultural psychology, poses the theory that “people become terrorists to restore a sense of significance in their lives, a feeling that they matter.” This vulnerability is expertly manipulated by ISIS. A large portion of their propaganda creates a feeling of the importance of jihadists. Padilla goes on to note that, in her surveys, the more she found Muslims feeling like they or other were discriminated against, the lack of importance people felt they had. Padilla extrapolates this problem, noting “respondents who felt culturally homeless – not really American, but also not really a part of their own cultural community – were particularly jarred by messages that they don’t belong.” Domestic Islamic extremism is a problem that runs far deeper than monitoring people’s search history. It is the infiltration of Islamophobia into Western culture which has shaken loose the very identity of Western Muslims and created a void for extremism to fill.

The West’s response to Islamic extremism has often been reactionary, to detrimental effect. After the 7/7 bombings, London terror surveillance ramped up, and an unarmed Brazilian man was shot on the London Underground for wearing a suspiciously large jacket. 9/11 was met with two wars. The Western response to terrorism is not to attack the source of the problem, but to merely patch up the initial wounds.

In some ways this is a logical response. Terrifying tangible acts drive the public’s thirst for a strong active response. However, classic responses to Islamic terrorist threats, the closing of borders and further filtering of international travel, not only prove to statistically oppose the origin of these threats, but may even exacerbate the problem. These actions are often supportive of Islamaphobic rhetoric and contribute towards a more unwelcoming environment for Muslims who have no affiliation with terrorism. Thus, the idea is perpetuated that you cannot trust people of a certain religion or creed, no matter the character of the person or the stakes at hand. Padilla’s research highlights that this environment may open the door for radicalization. While national security is crucial, evidence suggests that the Western strategy to terrorism actually runs counter to the goal of strengthening public security by alienating Muslim communities within Western society and thereby opening the doors for radicalization.

Unfortunately, terrorism has created a self-perpetuating cycle, and it will not ameliorate without a real intelligent government response. Far too often have we responded to violence and hate with more violence and hate, and government has more in the vein of a petulant toddler than an assortment of conscientious public officials. If the British government, and British people, want to make sure that the innocent lives lost on the 22nd of March receive justice and aren’t tragedies which we add to, it is imperative that the way in which Muslims and their communities are treated is improved. That means no more English Defense League marches, no more UKIP calling for the banning of burkas, no more Brexit ads with a “threatening” line of immigrants. It is key that Western society repairs its prejudice to begin to connect with Muslim communities and to take the first steps in fighting terrorism.