We Need To Talk About Laos’ Bomb Problem 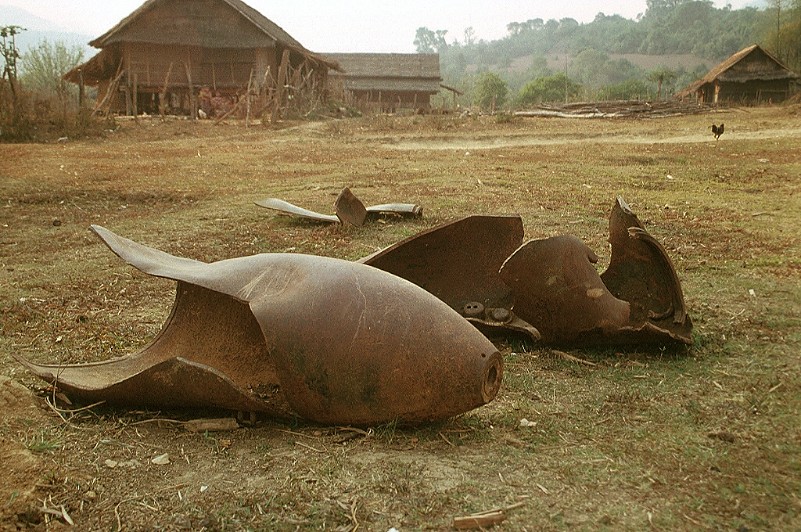 Between 1964 and 1973, the United States dropped two million tons of ordnance on Laos, making the small Southeast Asian country the most heavily bombed country per capita in history. The 580,000 bombing missions amounted to the equivalent of a planeload of bombs every eight minutes, every hour, every day, for nine years. This campaign is sometimes referred to as the “Secret War” in Laos, but that label remains a misnomer. For approximately 60,000 Lao citizens killed due to American bombs, this war was not a secret (Kurlantzick, 2017). For the millions more displaced, cast into poverty, or forced to become refugees, this war was not a secret. In 2010, America’s involvement was even the subject of a Congressional hearing. (Kurlantzick, 2017).

Perhaps what the label is referring to, then, is the way in which American politicians at the time denied their involvement, and how the American public remained unaware of what their government was doing. The US government justified these atrocities as part of their military strategy during the Vietnam War: they sought to carpet-bomb the Ho Chi Minh trail, a large part of which wound through Laos’ Khammouane province, to cut off supplies being taken from Vietnam during the war between the Soviet- and Chinese-backed communist north and American-backed south (Kurlantzick, 2017). Furthermore, the US saw Laos as a “bulwark”: a nation where they could “make a stand to prevent communism from spreading west,” and in the backdrop of the larger Cold War that was raging in full force, secrecy became the government’s priority. The price for this secrecy ended up being hundreds of millions of bombs dropped on rainforest, rural farmland, and villages.

Today, up to a third of these bombs still haven’t detonated.

In the 46 years since the bombings ceased, more than 20,000 people have been killed or injured by unexploded ordnance (UXO). 60% of all accidents result in death, and 40% of these victims have been children. Yeyang Yang, a Lao farmer living in the village of Ban Xang, was working his second job, burning the town’s garbage, when the heat from the fire triggered a bomb under the pile. Now, he “no longer has a right ear, … his right hand is a fingerless clump of damaged bone and muscle, [and] his face looks as if it is covered in a mask of melted, flesh-coloured plastic.” The mental trauma is equally damaging: after his accident, he isolated himself from his village and family and felt “self-conscious [and] depressed.” Although he is better now, his life remains impacted by his accident. When asked to talk about his experiences, he said: “I am very, very sorry and sad about what happened to me. I was only at work, doing my job. I can’t work anymore now.”

It remains clear that bomb-clearance efforts are critical now, more than ever. Current data suggests that approximately 1,600 km²—an area more than twice the size of New York City—still requires clearance. Although extremely dangerous, expensive, and time-consuming, clearing these bombs is fairly straightforward. Members of clearance squads comb through segments of land with metal detectors. Sometimes, they may need to clear forests or dig up farmland to make this process easier. When a metal detector beeps, they kneel down and dig. When they find the bomb, they flag and contain it. At the end of the day, they connect all the bombs to a detonation box, wheel an electrical wire 300 meters away from the site, clear the area, click a button, and “hear the same sound that Lao people have heard, on average, every single second for nine years.” One team can find, on average, 3 to 16 bombs a day, and while those figures are certainly indicative of the hard work of both those individuals and the country as a whole, they are relatively minuscule. International experts estimate that at this rate, it will take about 200 years before Laos is free of UXO.

American contributions to the cleanup effort are severely lacking. In just ten days of bombing Laos, the US spent $130 million (in today’s dollars)—which is $12 million more than it has spent in clean up over the past 24 years. In addition to financial contributions, the government has taken a few steps to acknowledge America’s wrongdoings. In 2016, the president at the time, Barack Obama, visited Laos and became the first American president in history to acknowledge that his country had dropped bombs and that, as a result, millions of innocent people were killed, thrown into poverty, or forced to become refugees. He added that “[F]or years the American people did not know [about the Secret War]. Even now, many Americans are not aware of this chapter in our history and it’s important that we remember it today.”

Notably, Obama did not apologize.

The future of American political involvement in Laos remains unclear. In 2016, the United States pledged $90 million dollars to help with cleanup efforts, which may signal a step in the right direction.

As bleak as the situation may seem, there are a few organisations providing important aid. International clearance efforts began in earnest only about 20 years ago, but the number and reach of organizations dedicated to making Laos bomb-free continue to grow. The Halo Trust is an organization based in the United States and the United Kingdom that empowers and educates locals on cleanup tactics, facilitates victim assistance, and runs UXO safety clinics. MAG is a charitable company based in the United Kingdom whose mission is to “get to a landmine before another child does.” Their work in Laos includes physically clearing areas as well as promoting risk education sessions catered especially to children. In addition, countries such as Norway are donating funds under a memorandum of understanding (MOU), a non-binding legal agreement to donate a certain amount of money per year.

Other organisations focus on improving the quality of life of survivors of UXO accidents, the majority of whom remain poor farmers or manual labourers. World Education is a non-profit organisation based in the United States that facilitates and provides resources for peer-to-peer support for these survivors. Due to a lack of awareness and resources, it can be difficult for survivors to get the mental health support they need. Being able to speak with and find solidarity among people who have gone through similar experiences can make a significant difference.

Despite increased efforts, the international community—particularly the United States—has a lot more work to do. A Lao official of the labour and social welfare department of Xieng Khouang province said, when asked about clearance efforts, that “we need a lot of funding… This year we received one million dollars, while usually we get at least two million. We have difficult tasks to perform… we can’t do [all of them] now because we don’t have the people or the money to do work.”

Although American bombs stopped raining down on Laos in 1973, their impact continued to be felt, making it still, very much, a contemporary problem. Decades of categorical denial of any wrongdoings in Laos have led to mass public ignorance, and although politicians are no longer covering up America’s crimes, the American people remain largely unaware. The slow but sure rise of international aid efforts suggests the international community is heading in the right direction, but the Lao people should not have to wait thousands of years to live in a safe country. The sooner the American public shrugs off the vestiges of the ignorance of their predecessors, the sooner they can demand—and facilitate—more aid for clearance efforts. One thing is for certain: the time to act is now.

Disclaimer: This article was initially published on January 1, 2020, but has since been amended to provide additional citations and clarity. In the first publication, the number of Laos citizens killed as a result of American bombs was misleadingly cited. The McGill International Review regrets this error.

Feature image by GothPhil is licensed under CC BY 2.0