Under the Weather: Caribbean charts a path beyond Irma and Maria 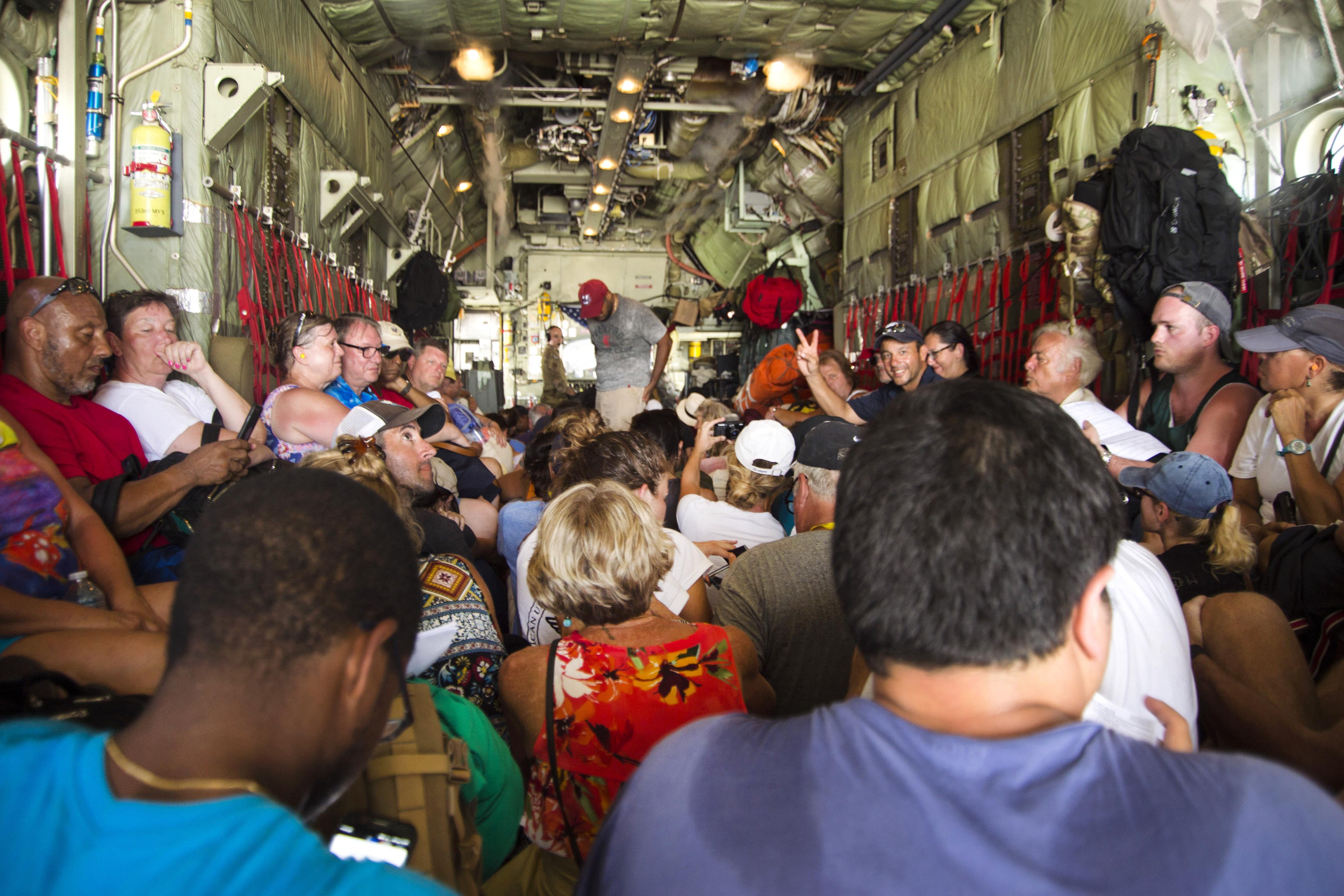 Evacuees sit on the floor of a US military aircraft as it takes off from St. Maarten to San Juan, Puerto Rico, Sept. 10, 2017. (Air Force photo by Staff Sgt. Erin Mill)
Share

Every hurricane season, the crystal blue waters that attract swaths of tourists to the Caribbean turn against the island nations so dependent on their idyllic draw. The stunning beaches, tropical forests, and pastel houses many picture when imagining “paradise” are swallowed by wind and waves, drowning the livelihoods of those who call the islands home. Hurricanes Irma and Maria, two of the strongest recorded storms in the Atlantic basin, decimated island after island over the past few weeks, and left the postcard-perfect setting looking like a war zone on a cyan sea, making recovery a daunting task. Islands like these now have a choice to make – should they promote a sustainable rebuilding method or focus on recuperating quickly. Risks and rewards lie on both sides, and the correct decision won’t be evident until it’s far too late to reverse course.

Hurricane Irma, the first blow of the decisive one-two punch that slammed into the Caribbean, first made landfall in tiny Barbuda as a Category 5 storm, destroying nearly 90% of all structures on the island and prompting mass evacuations to nearby Antigua. The massive storm continued on its rampage, destroying the French/Dutch split Saint Martin/Sint Maartin, US and British Virgin Islands, St. Barthélemy, and Anguilla. Two weeks later, Hurricane Maria, also Category 5 for most of her Caribbean landfalls, took a similar path, skimming by the islands hit hardest by Irma but crushing into the nations and territories designated as refuge for those fleeing the earlier storm. Dominica, Guadeloupe, and Puerto Rico were among the islands hit hardest by Maria.

The immediate aftermath of the hurricanes was shocking. Irma killed over 80 people in the Caribbean and the US, and final tallies of casualties from Maria are still largely unknown, but the number of confirmed deaths has reached nearly 30. In addition to the massive structural damages and lack of shelter, food supplies were depleted soon after the rain stopped. There were widespread power outages, and many were without clean water. Phone service was and is spotty at best, and general law and order broke down quickly. Roving bands of looters and thieves took advantage of the destruction to the wealthy’s playgrounds, stealing jewels, electronics, vehicles, anything of value.

Residents of the decimated islands just want normal life to resume, but recovery will be much more than simply rebuilding what the storms tore down. Responses in the initial wake of the hurricanes left much to be desired, and varied widely by government on local and national scales. Residents of Anguilla, a British oversees territory, looked enviously to the response by the French in Saint Martin, who themselves were jealous of the Dutch response on the opposite side of their 87 square km island. The one uniting force in the Caribbean is a regional disaster insurance program, the Caribbean Catastrophe Risk Insurance Facility (CCRIF). This ingenuitive agency doles out funds based on “parametric” triggers (wind speed, rainfall, etc.), and makes money available quickly, typically within two weeks. Irma-struck islands received $31 million total from the fund, and, thanks to Hurricane Maria, Dominica alone is slated to receive $19 million. This is only a fraction of the total repair cost – nearly $13 billion for Hurricane Irma alone, according to the Centre for Disaster Management and Risk Reduction Technology in Germany – but the funds provided by the agency allowed for a nearly immediate flow of cash, which is important in the early days of a disaster. They also don’t constitute the entirety of what islands will receive to rebuild. International funding is common following large scale natural disasters, it’s just slower to come by.

Now that urgent needs are beginning to subside, governments and populations are preparing themselves for the long haul. Residents are beginning to face the fact that tourism, a business vital to most Caribbean countries, will be diminished for the foreseeable future. Airports and ports are closed, hotels are crumbling, and beachside attractions have been swept away. For many countries, foreign dollars spent by content tourists comprises a major share of GDP – and a major share of all jobs. Now, residents dependent on tourism-generated income can either wait and see if visitors return to the islands soon or leave their islands and find new work elsewhere, which could even further damage the already sinking economies.

So what next? The hurricanes offer a chance to build, not just rebuild, and putting into place new and more effective protocols could be a small silver lining. For all their talk of climate change, Caribbean governments have been slow to implement policies that might mitigate damages from any future disasters, such as protecting poor people (defining stricter building codes, replacing flimsy houses with sturdy ones), shifting to renewable energy, and avoiding damaging fragile coastlines with new developments (removing protective mangrove swamps in favor of hotels).

Unfortunately, this prospect of a new, more resilient Caribbean would take a considerable amount of time and money, which many islands just don’t have. The region isn’t poor, in fact many countries are considered middle or high income, but this status has been achieved through high levels of public debt. When coupled with the elimination of a key sector of the regional economy, and when considering the astounding cost of simply repairing infrastructure, short term thinking becomes all the more appealing. Adding to this nearsightedness is the fact that money is only readily available in the immediate aftermath of a disaster. Cash flows less freely when governments need to prepare for storms, and storms are becoming ever more frequent/destructive thanks to warming seas. Understandably, reestablishing the tourism industry is at the top of many residents’ wish list, and as such regional governments will most likely forego the most tedious (and probably most helpful) alterations to their rebuilding schemes.

It’s difficult for politicians to see beyond the next election, and it will be months before the long term effects of these hurricanes are known. However, this is a certainty: low polluting countries will always bear the brunt of climate change, but with concerted effort and a lot of cash, they can build themselves a safer future. Residents are anxious to return to their “pre-storm” way of life, but if effort isn’t exerted now to prevent the catastrophic effects of hurricanes, rebuilding could very soon be the new normal.

This article has been edited by Marissa Fortune.