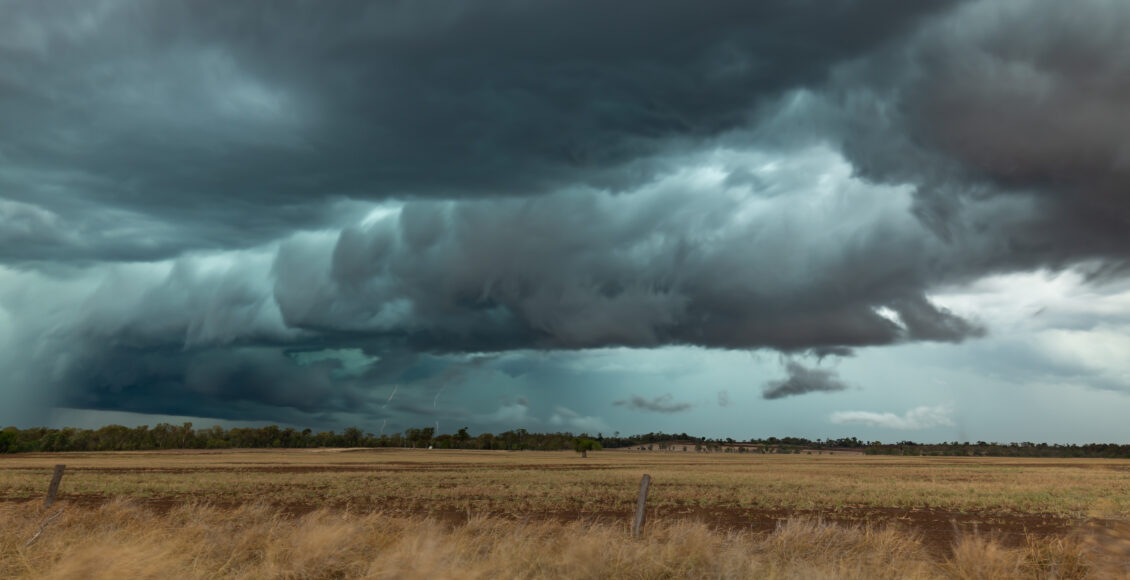 Scientists on the Intergovernmental Panel on Climate Change (IPCC) now agree that the rise in frequency of extreme weather events, including heatwaves, droughts, wildfires, floods, and hurricanes, are linked to climate change. Extreme weather is one of the most visible and impactful ways climate change manifests itself, notably through variation in precipitation and temperature patterns. No country on the planet will go unaffected by these consequences, and the distribution of the effects of climate change will be disproportionate through the proliferation of compound events. Regions suffering from drought are likely to see wildfires, while coastal regions at risk of rising sea levels may face flooding from rainfall. These weather events are becoming increasingly frequent, and their intensity is also escalating, reducing the reliability and predictability of historical weather patterns on which farmers rely.

Since 1971, climate change due to human activity has slowed growth in agricultural productivity by about a fifth. This decline results from temperature rises, causing a cumulative effect in which each additional fraction of a degree increases heat intensity. As such, for every degree that global temperature rises, maize yields fall by 7.4 per cent, wheat yields fall by 6 per cent, and rice yields fall by 3.2 per cent. Breadbaskets across the globe are being threatened, although by different weather conditions. India, the Horn of Africa and the American wheat belt face drought, while China confronts heavy flooding, and Australia swings suddenly between these extremes.

Temperature changes are worrisome as warm weather can either extend a crop’s growing season, which delays harvest, or accelerate maturity resulting in premature crops; opposite outcomes — both equally detrimental to consistent crop yields. Higher temperatures may also reduce or halt photosynthesis, contribute to crop dehydration, prevent pollination or promote an environment where pests can thrive and destroy crops. Higher temperatures also put cattle at risk of heat stress which can lower milk production or even result in death. Decreased grain availability reduces cattle feeding capacity, threatening dairy and meat supplies and rendering populations vulnerable to a lack of protein consumption.

In light of the ongoing grain insecurity caused by the war in Ukraine, global markets relied on the Indian subcontinent to offset this shortage. Indian Prime Minister Narendra Modi was prepared to increase wheat exports from their traditionally modest contribution to global trade. However, the region has since faced an unusual and prolonged heat wave, causing wheat crops to lose 35 per cent of their typical seasonal yield. As wheat prices and fuel costs skyrocketed with inflation rates, the Indian government swiftly rescinded their decision, ultimately banning all exports. Despite being the world’s second-largest wheat producer, and beyond the shortage caused by the conflict in Ukraine, India typically conserves their grain harvest for domestic consumption. Not only does the heatwave disrupt the global food supply, but it leaves millions at risk of starvation in a developing country home to nearly 18 per cent of the world’s population.

While temperature trends appear to be consistently climbing, changes in precipitation are less predictable and can result in either over or undersaturation. Many fertile lands with potential for agricultural activity may lack water without appropriate irrigation, while others risk oversaturation. Air and water pollution infiltrate land and water systems through precipitation cycles, endangering soil fertility and poisoning crop quality from the seed. Beyond the field, floods resulting from stormwater can damage or rot grain stores and make it difficult for farmers to maneuver equipment. These disruptions to stock and transportation exacerbate preexisting supply chain issues globally.

For example, heavy flooding in southern China has destroyed thousands of hectares of crops, primarily rice paddies. While the region has always been prone to seasonal flooding, government officials emphasize the food insecurity caused by extreme weather. Economic losses are estimated at 600 million USD, jeopardizing farmers in the country whose harvest loses value with each flood event while customers face rising prices for household staples. Though the cost of grain remained relatively stable, the price of meat and other agricultural products increased in 2020 when severe flooding became a regular occurrence. As such, Chinese President Xi Jinping has prioritized food security nationwide to protect citizens from famine. The Minister of Agriculture, Tang Renjian, is also implementing policies to increase food imports to reduce trade shocks, especially as crop conditions will not appear to improve in the coming years.

On May 18, 2022, following the publishing of the 2021 Global Climate Report, United Nations Secretary-General António Guterres cautioned that we may face a global food shortage in the coming years, exacerbated by the prices for food staples increasing significantly due to reduced crop yields. Shifts in the growing season caused by extreme weather events, even by only two or three weeks, may cause financial and livelihood losses for farmers, upset labour schedules, and affect many other mechanics of the agricultural process. Globally, higher prices could also lead states to adopt protectionist policies, disrupting trade patterns and supply chains. The anticipation of this vicious cycle has led the Reserve Bank to raise its inflation forecast regarding household expenditure on groceries in the years to come.

Mitigating the effects of extreme weather events on food security must be a collaborative global effort. While every government should seek to reduce emissions overall, they must also provide support and funding for the technology that would permit farmers to adapt their agricultural mechanisms to cope. These initiatives include developing genetically modified seeds to improve the resiliency of staple crops to withstand extremes of either drought or flood. Furthermore, adopting prediction systems in vulnerable regions such as the South Asia Drought Monitoring System can help detect early warning signs of impending drought and provide enough notice for farmers to plant contingency crops. Additionally, reliance on pumping groundwater, especially in dryer areas, contributes to a significant portion of emissions during agricultural processes. Replacing these diesel or electric pumps with solar energy, which has been successful in India and Pakistan, may be very beneficial.

Enhancing and strengthening trade flows is also necessary to alleviate the food crisis by ensuring time-sensitive access to food stocks. Markets can be kept open by reducing or lifting export bans and maximizing trade route efficiency through easing barriers on routes compromised by the war in Ukraine, including the Black Sea blockade. This blockade prevents Ukraine’s full grain stores from last year’s harvest from exportation to countries typically relying on them. Given the complexity of this article, assessing factors such as cost and timing to locate alternative trade routes is essential.

The current patterns of extreme weather are not easing up and will likely increase in variety and intensity. As population rates climb, the need for accessible and reliable food staples is more necessary than ever, lest the global population starve. By collaborating to ensure trade is operating effectively for all countries, as well as investing in the adoption of agricultural methods that can reduce emissions and improve crop yield, stores will be sufficiently full, and prices will remain stable. Only by giving this issue adequate attention now can states secure the food future of their citizens.

Featured image by texaus1 is licensed under CC BY 2.0.