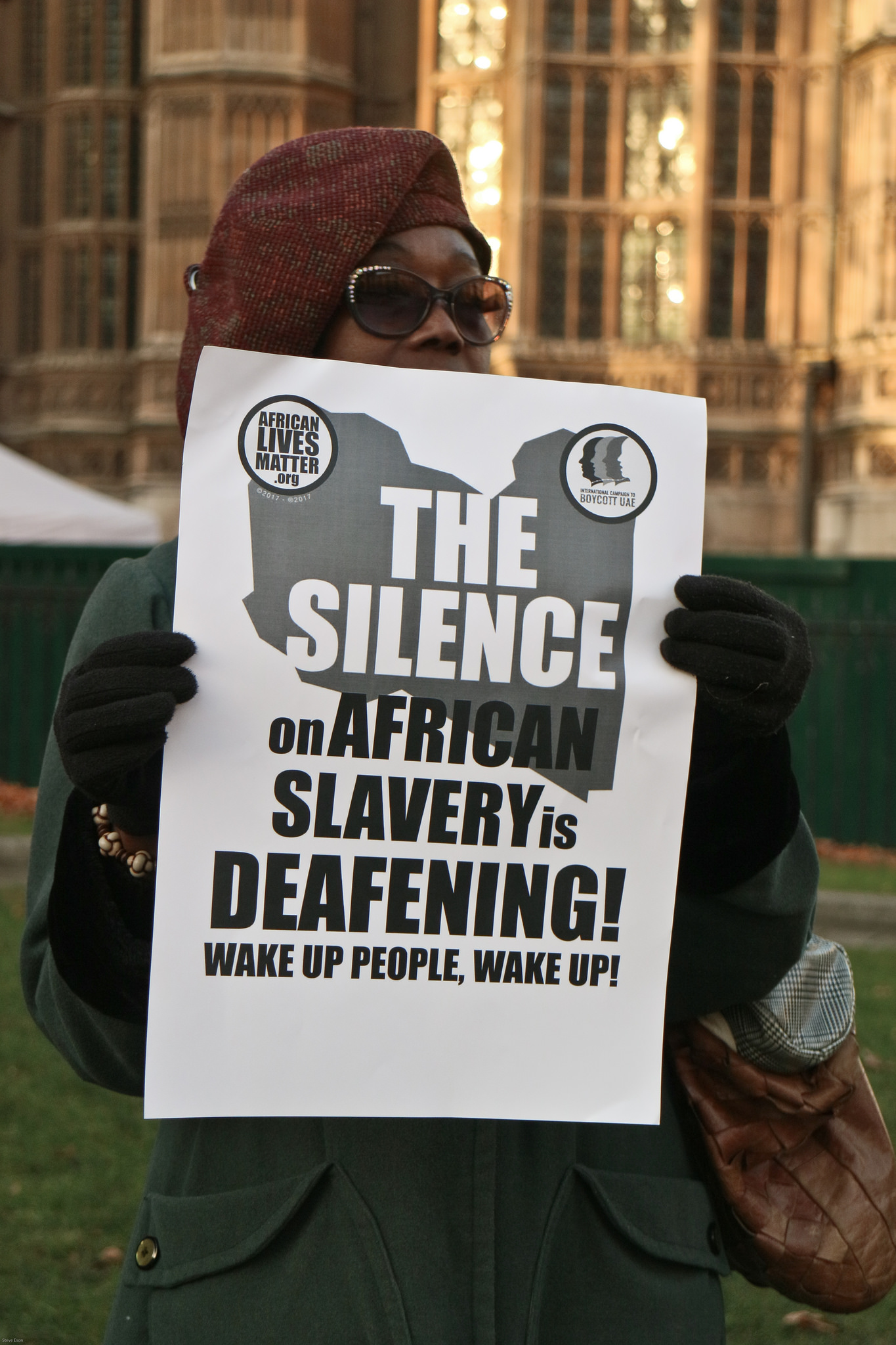 On November 13, CNN released a video of slave auctions in Libya. The video showed an off-screen auctioneer offering black men as “big strong boys for farm work,” rattling off dinar figures until one man, later identified as Nigerian, is sold for the equivalent of $800. Each day, an average of fourteen migrants fleeing from sub-Saharan Africa to Europe die in Libya. Many migrants, however, are treated as if they are no longer human even before they reach the Mediterranean coastline. Anti-black racism —which is common in the Maghreb, although not commonly discussed— exacerbates the degradation of black migrants in Libya. The auction depicted in CNN’s video is not an isolated incident. Rather, it is from one of nine known auction locations which, altogether, comprise Libya’s migrant slave network. Within this system, migrants are used as a “commodity to be exploited” by “armed groups that exercise effective control over the Libyan territory.” Though human trafficking has existed in Libya for centuries, CNN’s report tugged at global heartstrings and instantly provoked outrage. The video quickly surpassed one million views on YouTube, and anti-slavery protests emerged in various European and African countries. Like ordinary citizens, world leaders also spoke out in defiance of slavery. French President Emmanuel Macron was so appalled by the “crime against humanity” that he began a four-day trip to Africa. His supposed “shock,” however, was disingenuous: European leaders like Macron not only knew years prior about the trauma migrants experienced in Libya but also “created financial incentives to detain migrants and often sell them into slavery.” Although the media portray the opposite image, Western countries play a highly influential role in advancing Libya’s migrant crisis —and in causing its civil war in 2011— in order to serve their own interests. In 2011, the goal was to thwart Libya’s economy; now, it is to keep migrants out of Europe.

As anti-immigrant populism gains traction in Europe, the increasingly strict policies restricting migration are “directly contributing to the deterioration of conditions for migrants and refugees in Libya,” as Doctors Without Borders reports. Macron’s foreign policies regarding the relationship between France and Africa reflect these sentiments. “What has been done by Italy and Libya is a perfect example of what we’re aiming for,” Macron said in August. By modeling Italy and partnering his country with Libyan militias, a win-win situation is struck: for Libya, migrants are “the gold that finances Libya’s warring factions” —and this form of captivity keeps them from entering France. Analyzing Macron’s role in Libya, therefore, reflects less of a desire to mitigate the “crime against humanity.” Despite vowing to “act collectively in attacking these human trafficking networks,” Macron is actively trying to contain the problem within Libya. By outsourcing border security to Libyan militias, he subsequently keeps immigrants away from France. Foreign aid and humanitarian interventions thus require greater scrutiny in order to discern whether countries are utilizing crisis situations to serve their own domestic interests.

The use of “humanitarian aid” as a guise for Western countries to mold political structures for their own benefit is a common theme in countless African countries —of which Libya proves an apt case study. Macron’s actions eerily mirror that of former French President, Nicholas Sarkozy. In a recently released email of his to Hilary Clinton, Sarkozy’s reasons behind leading the attack on Libya are revealed: to increase French influence, acquire Libyan oil, and prevent the creation of a pan-African currency based on the Libyan gold dinar. However, after Muammar Gaddafi was overthrown in 2011, Libya was no longer a source of competition for Western nations.

While Gaddafi’s authoritative rule was “quixotic and brutal,” according to British-Libyan Tarik Kafala, the country had relatively better conditions prior to 2011. Under Gaddafi, Libya went from one of Africa’s poorest countries to the richest. Education and medical care were free, and having a home was considered a human right. Now, over 33% of people fall below the poverty line in the country torn by civil war. The treacherous conditions of the region are reflected in its migrant detention facilities, where food and space are scarce, but forced labour and sexual violence are rampant. According to the International Organization for Migration, 771,146 migrants, refugees, and asylum seekers were in Libya as of November 2016. Few make it to their intended destination. Many become slaves; others die either at sea or in the detention facilities; and the rest are transported back to their home countries. A majority of these migrants are from Sub-Saharan African countries, as is the case of Victor, a Nigerian migrant interviewed by CNN in a detention centre. “I spent my entire life savings leaving,” Victor said, lamenting how some of his friends had arrived in Europe while he waited to be deported back to Nigeria.

While the migrants endure disparaging conditions in the detention centre, Libya’s warring factions make a profit. The underground slave trade is an integral source of funding for Libya’s various militias through debt bonding and ransom trafficking. Since trade routes from Italy to Libya have increased security —through the employment of powerful Libyan coastguards, many of whom are paid by European countries— sub-Saharan migrants are often captured by the coastguards and transferred to human traffickers. These traffickers then demand a price from the migrants in order to be released and return home. However, since many migrants, like Victor, have devoted their life savings to reaching Europe, they often cannot pay their smugglers. The migrants are auctioned to the highest bidder, who then extracts ransoms from their family for a much higher price than they paid at the auction.

Libya’s ongoing history of anti-black racism is also an enabling factor of its slave network. While discussions of racism occurring in many cities in the United States are often reported in Western-based media outlets, anti-black racism within the Maghreb is less frequently discussed. Algerians, for example, “often refer to Sub-Saharan people as “Africans,” as if the Maghreb were on a different continent; black Libyans are called “Fezzazna” to socially designate them as an “inferior caste.” The Maghreb’s history of degrading black individuals thus contributes to Libya’s current migrant crisis, where black people are not even treated as human. Just as Libya’s racist sentiments are deeply embedded within the country’s history, the dangerous conditions migrants face in their home countries reflect histories of colonial exploitation and violence. Therefore, comprehensively addressing the crisis in Libya is not as simple as deporting migrants back home.

However, to avoid further harming both the migrants and the relationship between Libya’s warring factions, it is important to analyze the incentives Western countries may have to intervene. Both now, and at the time Gaddafi was overthrown, Europe’s presence in the intervention of the West in Libya served particular political agendas. For example, France wanted to “address the concern of […] Qaddafi’s long term plans to supplant France as the dominant power in Francophone Africa,” according to Sarkozy’s email. They responded to these concerns by co-leading the intervention in aims to “increase French presence,” flex France’s military muscles on an international stage, and halt –or even reverse– Libya’s exponential growth. As political agendas shift, however, so do intervention efforts. Macron’s desire to keep migrants away from his country’s borders also reflects the growing sentiment of anti-immigrant populism across Europe. “Personal feeling over immigration was a particularly dominant motivation in the run-up to the Brexit vote, said Nancy Kelley, the director of the policy research centre at the National Centre for Social Research. Now, a year after Brexit, migration to the UK has dropped by 43%. Moreover, Trump’s “immigration crackdown” has furthered this fear of immigration worldwide.

Though “wrapped in a cloak of goodwill,” self-serving incentives lurk under the image of benevolent leaders offering foreign aid —and leaders do whatever they can to ensure such motives are hidden. When a student asked Macron who the migrant traffickers were during his talk in Burkina Faso, Macron took the innocent question as an affront to his country. “You are unbelievable,” he exclaimed, “ask yourselves the question. It’s not the French who are the traffickers, it’s the Africans. So everyone should understand the responsibility.” When Macron adds “show me a French, Belgian, German person, who carried out trafficking between Nigeria and Libya. This person doesn’t exist,” he enforces the notion that Europe holds no responsibility for the problems that occur within Libyan borders. Until European leaders recognize their historical and current role in advancing Libya’s migrant crisis, no European intervention efforts will produce sustainable, long-term change.