What Do the Flags at Hong Kong’s Protests Mean? 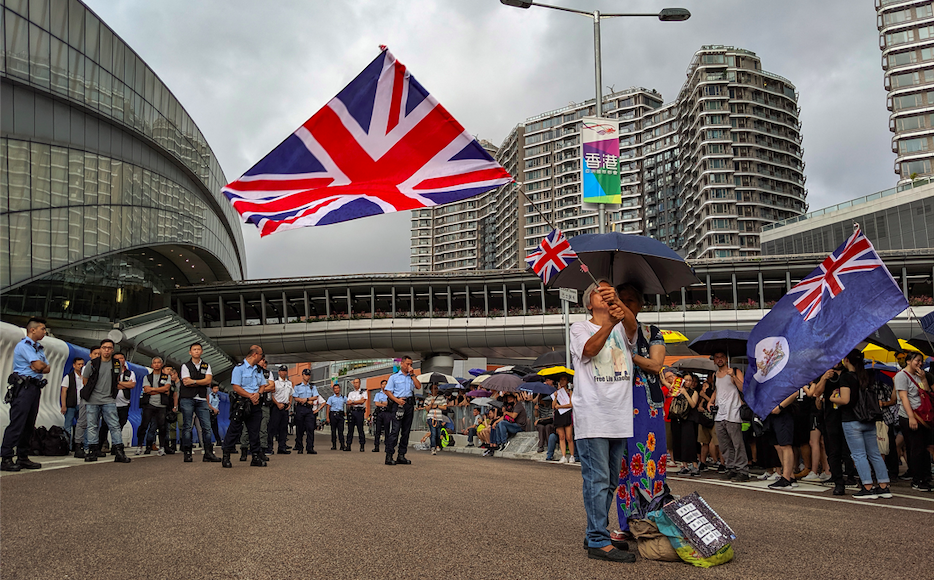 Hoisted among a sea of protesters in Hong Kong are flags whose presence has come to dominate not only the city’s streets but also the internet. With images of solitary flag bearers— usually standing against a backdrop of chaos and violence⁠— empowering audiences at home and stirring onlookers abroad, many have come to believe that the back-to-back months of protests will soon transpire into a full-fledged revolution.

Indeed, the sights and sounds in Hong Kong prove the ubiquity of revolutionary sentiments. Originally spurred by the proposal of an extradition bill largely seen as a threat to democracy in Hong Kong, the protests are entering its tenth consecutive week with no signs of slowing down. The continuation of the protests, in spite of the recent concession made by Chief Executive Carrie Lam to indefinitely suspend the bill, leads many to view it as a direct challenge to China’s sovereignty over Hong Kong. Tensions are rising as mobs, strikes, and lawlessness continue its stronghold over the city.

When such imagery is coupled with viral videos that depict demonstrators chanting to Les Miserables’ ‘Do You Hear the People Sing,’ it is easy to liken photos of Hong Kongers standing behind their flags to a modern rendition of Delacroix’s Liberty Leading the People.

Despite appearances, however, many flags waved at the protests are as divisive as they are unifying. Some flags have controversial implications that are worsening internal divisions among the people of Hong Kong.

What follows is a brief rundown and analysis of the different flags flown at the protests:

The Union Jack is a symbol with its roots at the origins of the protests, as the reasons for the present-day conflict can be traced back to Hong Kong’s colonial beginnings. As a British colony, Hong Kong has operated under a capitalist system and committed to western values. With its people adopting a way of living similar to those afforded by democracies, it was under British rule in which a unique Hong Kong identity and culture were cultivated.

Whilst the 1997 Handover transferred Hong Kong’s sovereignty from Britain back to China, it also established that “the previous capitalist system and way of life [in Hong Kong] shall remain unchanged for 50 years”. Beijing’s attempts to meddle with the island’s domestic affairs has repeatedly breached the ‘one country, two systems’ principle, and the extradition bill is largely seen as the last straw in a series of infringements from China.

Thus, many view the embrace of the Union Jack at the protests as one of nostalgia; it represents the yearning for ‘better days’ of the past in which western values were enshrined. Hence, pictures of the Union Jack being waved at protests are often sensationalized by the press to convey Hong Kongers’ anti-mainland motivations behind the demonstrations.

One individual favoured by the press is ‘Grandma Wong’, a 63-year-old phenomenon renowned for defiantly waving the Union Jack amid surrounding chaos. Images of Wong waving the saturated shades of red, white, blue contrasted against the grim surroundings have become iconic for its cinematic appeal.

However, the embrace of Union Jack is as ironic as it is iconic. Although the bearing of the British flag is largely symbolic of an espousal of democratic values, Hong Kong was never granted democracy under British rule. Thus, some can accuse Union Jack-wielding demonstrators of colonial mentality and interpret their actions as an implication that a pre-handover lifestyle and reversal back to colonial status is more preferable than relative independence and autonomy.

Another common sight at the protests is the colonial-era Hong Kong flag. Drawing even greater controversy than the Union Jack, this flag represents a more blatant form of colonial nostalgia that is polarizing the city’s community.

One can interpret the bearing of this flag at face value – as a brazen call for Hong Kong to return to British sovereignty as a colony. However, only a small minority of protesters are demanding for this in reality. More are choosing to bear the flag as a political statement that speaks to the direness of the status quo – how reliving the past under British colonizers is decidedly better than continuing into a future under Communist China.

The presence of the colonial-era flag at the protests has reignited conversations about the ranging postcolonial attitudes that exist in Hong Kong, and the sensitivity of these conversations reveals how colonialism remains a topic that continues to divide opinion in society today.

Another flag to appear at the protests is the American flag. Perhaps the most recognizable symbol of freedom, many view the carrying of the star-spangled banner as a nod to Hong Kong’s democratic aspirations and an homage to their own fight for freedom.

However, the presence of American flags at protests is implicating, as it has opened a new pandora’s box of sorts. The Communist Party has since referenced instances of American foreign interference and meddling to accuse the US intelligence of engineering the current protests in Hong Kong in order to destabilize the mainland. Leveraging on this claim, Beijing continues to invalidate and dismiss the insurrections in Hong Kong by accrediting it to American scheming.

Considered by many to be the unofficial flag of the protests, the Black Bauhinia is an adapted version of Hong Kong’s national flag. With the bright red background of the national flag replaced with a dark black, the flag mourns the absence of prosperity and unity in Hong Kong and reflects the dismal conditions the city is facing.

Some versions of the Black Bauhinia depict wilting petals of the national flower, presenting a graphic reflection of the erosion of the rights and freedoms enjoyed under the ‘one country, two systems’ principle.

Though divisive are many of the flags protesters carry, they fly together in solidarity— a solidarity that sees Hong Kong continue its resilient march towards democracy.

Naomi is a U3 student double-majoring in Political Science and History. She has a particular interest in US-China relations and the interplay between culture and media. In her spare time, you will find her refreshing her Twitter feed or streaming tennis!