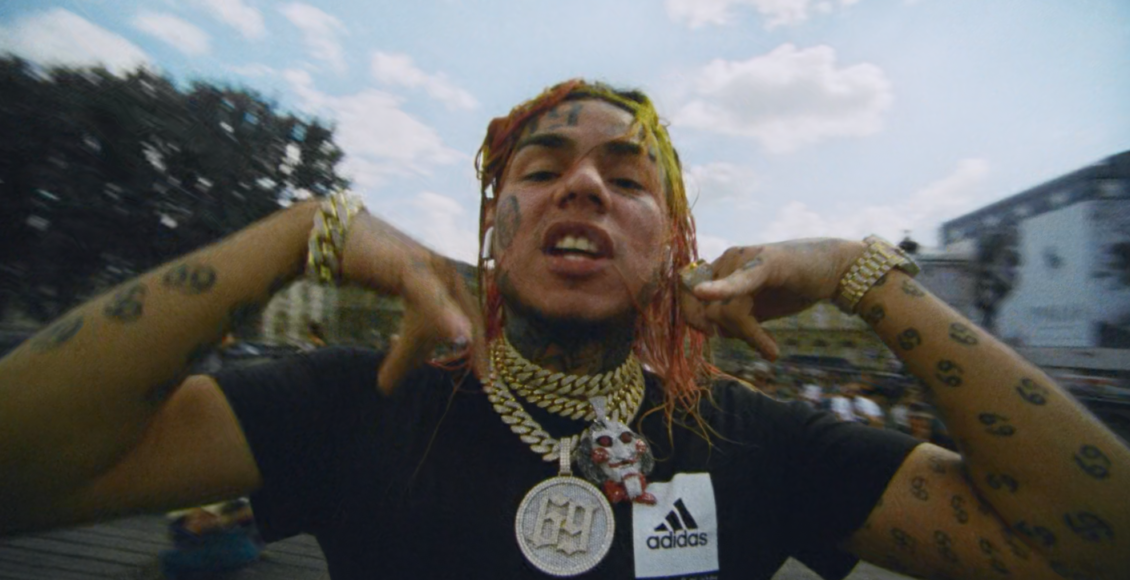 Rapper Tekashi69 (6ix9ine) made headlines last November when he was arrested on federal racketeering and armed robbery charges. These charges were related to his involvement with the Nine Trey Bloods, an East Coast street gang originating from New York City. Born Daniel Hernandez, the young rapper pleaded guilty to nine crimes upon his initial arrest and faced a mandatory maximum sentence of at least 47 years.

Tekashi69 shot to popularity upon the release of his hit tracks “Gummo” and “Kooda,” in which the artist displayed his aggressive, scream-rap flow, accompanied with music videos that gave fans a look into his gang lifestyle. Nearly a year later, the lyrics to both songs would be explained in Hernandez’s court testimony, and used to expose the criminal activities of several Bloods gang members (some of which were featured in the music videos) as part of a plea deal with the federal courts in the hopes of a reduced sentence. Unanimously mocked as a snitch by the hip-hop community, Tekashi69’s re-acceptence into the music scene by his peers is now unlikely.

Gummo (Official Music Video). When asked what Gummo was about in court, Tekashi69 responded that it was a “diss song” against rapper Trippie Redd, who he identified as a member of a rival Blood sect. Trippie Redd was later attacked by Nine Trey Blood members, as confirmed in Tekashi69’s testimony.

In the age of social media, Tekashi69 leveraged likes and followers to create his persona and boost popularity. The exposure of his case consequently went viral, and while his arrest has been the subject of several online memes, few have been inclined to analyze Tekashi69’s case from a cultural and political lens. What makes Tekashi69’s case so intriguing is primarily the impact that he has on youth popular culture, coupled with Tekashi69’s story of how he became involved with the Bloods sect. While many gang members in modern day America typically cite feelings of disenfranchisement and poor social conditions as reasons for gang membership, Tekashi69’s involvement with the Nine Trey Bloods is largely perceived as a case of willful membership for credibility purposes.

In America’s most notorious cities for heavy street gang involvement — New York City, Los Angeles, and Chicago, among others — reasons for gang affiliation are seemingly universal. Many individuals join seeking identity, protection or brotherhood, while others are subject to risks that exacerbate propensity for gang involvement, such as heavy drug/alcohol abuse or lack of educational/employment opportunities. In an NPR interview with former Chicago gang members, one individual mentioned how gang involvement can typically affect “young people who are just kind of hopeless.” It appears that many issues stem from a lack of institutional support, often accelerated by a cycle of generational violence and/or poor living conditions. Unlike Tekashi69, many implicated in gang culture do not willingly and actively seek participation, but are rather surrounded by a culture where gang affiliations are encouraged or deemed as necessary for financial or social survival.

A lack of concrete action at the institutional and governmental level is a key factor in the increasing incidents of violence plaguing gang-affiliated communities today. The glamorization of this gang lifestyle, perpetuated by artists like Tekashi69, can further contribute to the disservice of communities suffering from gang violence and perpetuation of stereotypes against those who find themselves implicated in such activities. It is, undoubtedly, the allure and hype factor of gang involvement that is pervasive among popular artists in our culture today. These individuals are bestowed praise and popularity for lyrics regarding robbing, looting, and living a wealthy lifestyle as a result of engaging in these types of acts.

The politically conservative argument would frame the glamorization of this lifestyle, and Tekashi69’s success, as evidence of a culture obsessed and accepting of violence, drugs, and destruction. Despite the several social factors influencing gang membership, Tekashi69’s willingness to affiliate himself with the Bloods in order to boost his popularity and gain street credibility can be said to indicate a violence-accepting and promoting culture. Furthermore, in spite of the backlash against Tekashi69 by the hip-hop community, his ability to secure a 10 million dollar record deal from prison enforces the notion that chaos and controversy is rewarded in current American culture. With that being said, Tekashi69’s popularity is also the product of several other factors, which do not necessarily relate to his perpetuation of a gang lifestyle. Many individuals who listen to his music are attracted to his loud personality and the punk-rap music style he helped popularize in mainstream culture. Similar to the objection that violent video games produce violent behaviour, Tekashi69’s popularity is not direct evidence of an American youth increasingly accepting of the lifestyle he perpetuates, but perhaps an American youth with greater curiosity for what he appears to represent.

What does ring true to the conservative argument regarding America and violence is the fact that violence is prevalent in American society. However, the widespread presence of violence is not just in the media through T.V., film, and music, but in copious real life incidents throughout the country. From increasing cases of gun violence, to the alarming number of violent deaths in comparison to similar democracies, there is something to be noted about the prevalence of violence within American society. Jill Leovy, in her international bestseller book Ghettoside, states how “we have grown far too accepting of our high rate of homicide” in reference to the homicide epidemic across America and specifically within urban areas in Los Angeles which are oftentimes gang ridden. Leovy ascribes the lack of institutional change in these communities to a series of broken systems of criminal justice and punishment, coupled with misdirected media information, and unconcerned law enforcement.

The hip-hop genre has regularly seen topics regarding gang lifestyle and culture analyzed in several of its lyrics. Artists like 2Pac, Public Enemy and N.W.A. helped the genre explore several social issues that intertwined with a gang lifestyle mentality and paved the way for marginalized voices to discuss critical topics such as police brutality, poverty, and race relations. Modern artists like Kendrick Lamar and Run the Jewels continue to shed light on these concerns. It is certain that music and overall popular culture exposes fans to new political perspectives, and therefore to a certain extent, different forms of media influence consumers in one way or another.

In exploring the Tekashi69 case from a political and cultural lens, we have come to observe the artist’s utilization of his gang membership status for reasons of pure self-interest. In essence, Tekashi69’s relationship with the Nine Trey Bloods was entitled and exhibits ignorance of what a gang lifestyle and affiliation actually meant. Tekashi69 is certainly not the only artist to have used street credibility for personal gain and “clout.” His rise and fall with the Bloods sect is thus indicative of the gang mesmerized mindset present in popular culture and ill-addressed, will only perpetuate violence.

The Feature Image from the “Autos Reloaded – 6ix9ine & Vladimir Cauchemar” video by Vladimir Baranovsky is licensed under CC BY 3.0.