What Would Proportional Representation look like in the United States? 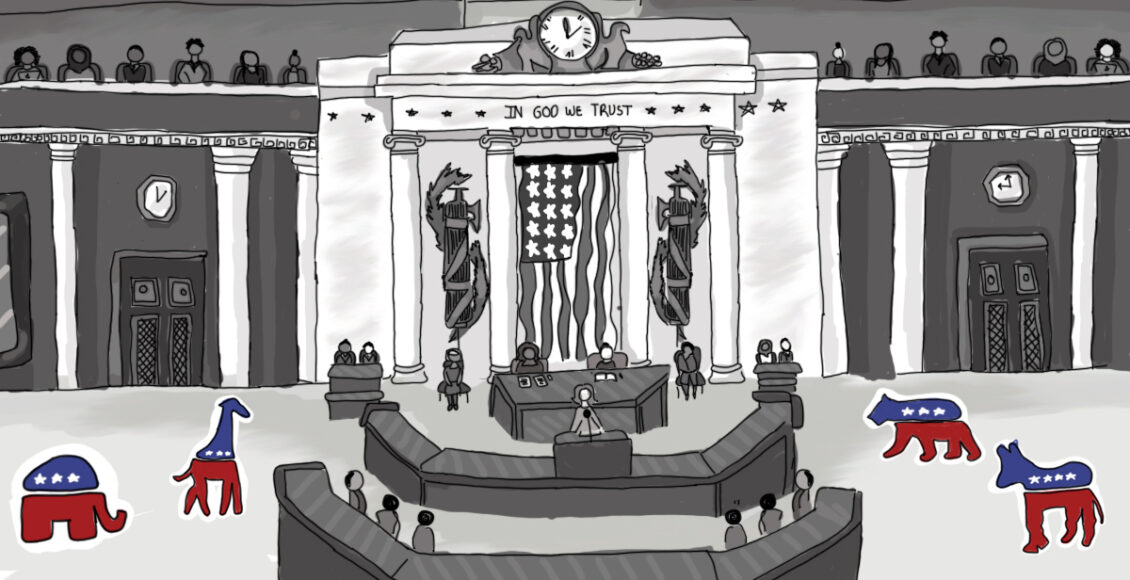 Political polarization is at its worst in the United States since the Civil War. This polarization, among many other factors, has been driven in large part by the two-party system, wherein the current electoral rules —First Past the Post for Congress and the Electoral College for the Presidency — have encouraged the growth of two dominant parties with which fewer voters truly identify.

In addressing this issue, an interesting hypothetical comes to mind: what would come of our political climate if tomorrow, the US passed legislation to reform the executive and legislative branches into a proportional representation system? A system where the Presidency becomes diminished in importance, akin to Austria or India; with Congress becoming a unicameral legislature where national vote share determines the number of seats a party wins? What are the potential outcomes of this fundamental shift in governance, and would essentially abolishing the two-party system amount to a net positive or negative?

The two-party system, together with the electoral college, have long been a plague upon the American voting system, skewing presidential and senatorial elections in favour of sparsely-populated Southern and Great Plains states, and providing a fundamentally inaccurate depiction of the American political identity. Converting to a one-person-one-vote system in which vote-shares obtained by a party translate proportionally into political power, and where third parties (and more) would gain relevance in electoral settings, would enable Americans to vote for parties which more closely represent them, safe in the knowledge that their vote counts. As such, this system would negate the idea of “wasted votes,” and may even boost voter turnout as people fall in with parties that better fit their political views. Ultimately, we could achieve a government that more accurately represents America’s political identity.

Adopting a Proportional Representation (PR) system would enable us to overcome one of the greatest electoral challenges in the United States: gerrymandering. Gerrymandering, the partisan redrawing of district lines, enables parties to form districts whose cumulative political allegiances lean in their favour, allowing them to capture more legislative seats. This system disempowers voters who find themselves in their district’s political minority, devaluing their vote and often producing a disconnect between total vote-shares and the number of legislative seats. A PR system would eliminate gerrymandering altogether as all votes would hold the same national value, irrespective of where they were cast.

In the past four years, the Republican party has shown far greater party discipline and cohesion than the Democratic party. Republicans have a tendency to unify, despite their wide diversity of views. Trump’s approval ratings remain extremely high amongst Republicans, while Democrats are almost evenly split between their progressive and moderate wings. This may bode poorly for a conversion to a PR system with a unicameral Congress reflecting a wide range of ideological positions. There’s a chance that the Democratic party would divide and fragment in reflection of their wide variety of political affiliations and ideologies, while the Republican party may remain unified. With the singular Republican party better able to capture a plurality of the national votes, this dynamic has the potential to create a mega-party in semi-permanent control.

However, we should consider the rift that has begun to form in the Republican Party in the past few months. In the fallout of the January 6th Capitol Insurrection, tensions between Trump and supposedly “disloyal” Republicans, like former Vice President Mike Pence, culminated in a threat to form a third party separate from the Republican Party in early January. Though it has since been reported that the former President has been talked out of pursuing this plan, who’s to say the conversation wouldn’t be reopened in light of a shift to Proportional Representation? After all, one poll found that 46 per cent of Republican voters would be willing to defect to a third party started by the former President. With such a support base, Trump may be tempted to capitalize off of his lingering popularity to grab what power he can, with a third party reflecting this unique populist brand. Even so, PR could also mean that the anti-democratic politics of demagogues such as Trump would be isolated from the political mainstream, and pushed towards the ideological fringe. Indeed, there is evidence to suggest that PR systems are effective at isolating firebrands and extreme elements. This could indicate that PR would effectively break down the two-party system and give rise to a pluralistic democracy.

The US two-party system has created fertile ground for negative partisanship to take hold of US politics, where voters’ hatred of the other party drives their vote more than anything else. Voters become unwilling to support politicians from the other party, limiting the ability of governments to win decisive majorities, and encouraging politicians to refuse to reach across the aisle, causing gridlock and government shutdowns. As one columnist noted, this leads to parties “constantly trying to stick it to each other in hopes of winning the next election.” A PR system would encourage coalitions to work together more, defuse tensions, and potentially reduce polarization. It would prevent parties and their voters from viewing one another as “existential threats,” and would allow America to move past hyper-partisanship. It could even potentially prevent another disaster like the January 6th attack on the Capitol.

However, the counterargument to this is that the US doesn’t have the democratic ethos for parties to be willing to build coalitions. As evidenced by countries such as Spain or Belgium, there is a real possibility such a system could result in even greater gridlock than before, with parties being unable to form governments for months, or even years. Furthermore, there is limited evidence that PR directly reduces polarization, with some studies finding it has a negligible effect on polarization. Indeed, it would be disingenuous to say polarization is not a problem in countries with PR systems. One need only look at South Africa and its “polarized pluralism” to realize polarization could continue on. Essentially, with polarization in the US at such a high, a PR system may not make it disappear overnight, and the new system could continue to breed instability.

Proportional representation would not be a silver bullet for the many issues currently plaguing the US political system. The partisan divide currently rotting American politics wouldn’t be changed or eclipsed overnight by a PR system, but rather it could be improved in a very gradual process. PR would definitely have many benefits: increasing voter turnout, more accurately representing the will of the American people, ending the cancer that is gerrymandering, and potentially increasing the competence of the government. However, there are potential downsides as well: coalitions could be more unstable and collapse more easily, a dominant mega-party could form, and the US could possibly just transition from two-party polarization to pluralistic polarization.

The fact of the matter is, there is no definitive answer as to how a PR system would play out in US politics, and — given the current political climate — how the two-party system would shake out in such a transition. However, considering how utterly dysfunctional, incompetent, and toxic the current system is, we must ask ourselves if it’s time to try out a new path.