What’s next for the “Switzerland of the Middle East?” 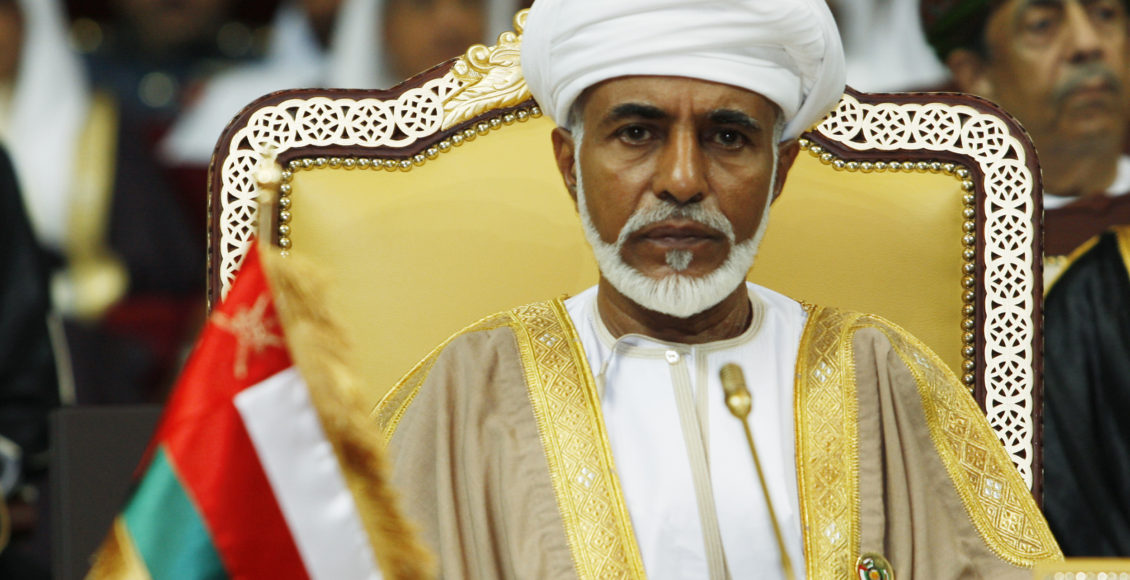 Located on the south-eastern tip of the Arabian Gulf, Oman is surrounded by nations prone to meddling in each other’s domestic affairs and locked in Iran and Saudi Arabia’s sectarian cold war. Despite this, the tiny sultanate has maintained its sovereign agency and actively keeps an arm’s length from its neighbor’s foreign policy adventures.

Akin to the Swiss, independence, pragmatism, and mediation  are core pillars of Oman’s foreign policy. However, as Sultan Qaboos Al Said’s 48 year reign looks to be coming to an end, the question is, what happens next?

The Switzerland of the Middle East

Oman’s historic modus operandi has been to promote diplomatic bridge-building via quiet diplomacy and international institutions. Sultan Qaboos understands that in order to maintain Oman’s neutrality and promote international cooperation, Oman must ingrain itself into the international system. Within the first decade of Sultan Qaboos’ rule, Oman joined the United Nations, the Arab League, the Islamic Conference Organization, the Gulf Cooperation Council and the Non-Aligned Group of Nations.

It’s a vocal member in the Gulf Cooperation Council (GCC) and openly displays agency in the Saudi-Iranian Cold War, preferring to bridge the diplomatic gap between the two regional heavyweights. In 2011, Oman abstained from assisting its fellow Gulf Kingdom’s military deployment against the Iranian bankrolled Bahraini uprising.  In 2015, Oman refused to join Saudi Arabia’s military coalition in Yemen and is playing a mediating role in the conflict. Despite the Gulf Kingdoms’ embargo against Qatar in 2017, Muscat still maintains bilateral ties with Doha and has even acted as a transit gateway for Qatari exports while  maintaining diplomatic non-involvement in the Gulf crisis.

Oman’s moderate foreign policy extends outside the Arabian Gulf.  Oman initially acted as a mediator during the Iran-Iraq War in the 1980s, and then used the conflict as an opportunity to form the GCC in 1981. It even advocated for Ba’athist Iraq and revolutionary Iran to join despite their tensions. Muscat’s behind-the-scenes mediation role in the 2015 Iran Nulear Deal was meant to diffuse regional tensions and foster new economic opportunities with Iran whilst reducing dependence on the Gulf Kingdoms. Oman has also proven to be an effective inter-state hostage negotiator, a policy that has allowed it to score brownie points with the West. In 2016, Muscat played a critical role in the Canadian government’s effort to secure the release of  Concordia University professor Homa Hoodfar from Iranian state custody. Earlier this year, Oman brokered the release of French and American citizens captured by Houthi rebels in Yemen.

While attempting to maintain popular relations with regional powers, Oman has undertaken  unpopular policies that look out for its own long-term goals of securing its economic, security, and political needs. It was the only Arab state to maintain ties with Egypt after its 1979 peace treaty with Israel and has since supported Middle Eastern peace initiatives in the Holy Land. Following Israeli PM Benjamin Netanyahu’s state visit this past October, Oman now stands alone as the only GCC state to recognize Israeli statehood.  During the on-going Syrian Civil War, the sultanate hasn’t even closed its embassy in Damascus, despite its Gulf allies cutting diplomatic ties and funding insurgency movements against the Assad regime. Muscat’s primary goal in Syria is counter-terrorism against extremist groups like the Islamic State, not regime change against Bashar al-Assad – who poses no direct military threat. In 2013, Oman was also against GCC state military integration, fearing that it would signal impending war against its allies in Syria, Iran, Iraq, and Israel.

The Ibadis are a third sect that split from the Kharijite extremist movement during the First Muslim Civil War (656-661) between the proto-Sunni Umayyad Caliphate and proto-Shia Rashidun Caliphate under Ali ibn Abi Talib’s reign. The Kharijite, who were initally among Ali’s forces, had a radical approach to takfir (Islamic excommunication) and broke off to form their own movement, excommunicating both caliphates from their interpretation of Islam in the process. They would go on to assassinate Ali and prove an existential threat to the Ummayyad’s religious legitimacy. The Ibadi don’t follow the same beliefs, actively distancing themselves from their Kharijite heritage in order to promote a moderate version of Islam that blends many aspects of Sunni and Shia Islam, while not completely abiding by either of them.

Western pundits tend to directly point to this era in Islamic history to rationalize Middle Eastern foreign policy. By this essentialist logic, which ignores the numerous sub-sects and schools of Islamic jurisprudence that emerged since the conflict, the Ibadis ought to be aggressive toward both Sunni and Shia majority spheres in the Islamic World. Evidently, they’re the mediators between them.

This popular media narrative doesn’t define Oman’s moderate foreign policy. While sectarianism can prove to be an effective mobilizer in domestic affairs, it is not the primary driver when it comes to foreign policy.  ‘Ancient sectarian rivalries’ don’t dictate the sultanate’s – and most Middle Eastern nations’ – foreign policy. Realpolitik and self-preservation do. To Oman, “the enemy of my friend may still be my friend.”

Oman has never overestimated its own capabilities or underestimated regional powers’ intentions toward the sultanate. Its pragmatic neutrality on the international stage can be directly traced to its reigning Sultan Qaboos Al Said’s foreign policy directive. A military man himself, Sultan Qaboos realizes that Oman’s geo-strategic location in the Straits of Hormuz and minuscule military of 45,000 make it an attractive target for meddling foreign powers. However, Stultan Qaboos, 78, has been diagnosed with terminal cancer and is now rarely spotted in public. To prove that he’s still alive, Sultan Qaboos sporadically makes public appearances every few months.

And The Next Sultan Is…

Having taken control from his father in a bloodless palace coup in 1970, Sultan Qaboos knows the importance of rentierism and realpolitik in maintaining regime stability. Over his forty eight year rule, Qaboos has managed to transform Oman from a poverty stricken backwater state into a modern welfare state with a thriving oil exporting industry complimented by a modern corporate infrastructure that attracts foreign workers and multinational corporations.

A brotherless, childless divorcee, Sultan Qaboos has been at the center of Oman’s exponential development and mediatory foreign policy for nearly half a century. As Sultan, he decides every shift in Omani social, political and macroeconomic policy.  He also currently serves as prime minister, defense minister, finance minister and governor of the central bank. Sultan Qaboos is so central to Oman’s governance that in 2014, during his two month trip to Germany for medical treatment and subsequent three month recuperation period, no significant decisions were made.

However, Sultan Qaboos’ health concerns has started to worry the House of Al Said that a succession crisis is all but guaranteed following his passing. Having never publicly announced an heir, unorthodox for any monarchy, the answer to the royal family’s anxieties come down to a sealed envelope containing the heir’s name written by Sultan Qaboos stowed away in the royal palace in Muscat. There is allegedly another envelope hidden in another part of the country containing two names.

The rationale for this royal treasure hunt isn’t as outlandish it may sound. Foreign powers have traditionally tried to gain favor with royal heirs in the region to secure their diplomatic allegiance once they ascend to power. Sultan Qaboos himself successfully overthrew his father at age 30 thanks to support from British intelligence services. In return, Sultan Qaboos forwent Oman’s historically isolationist policies and opened the sultanate to greater foreign, especially British, economic investment and diplomatic support. Sultan Qaboos’ foreign-bankrolled ascension to power would then be used by communist rebels as a rallying-cry during the Omani Civil War (1962-1976).

Sultan Qaboos prioritizes Oman’s neutrality and agency on the international stage; naming a successor at any point during his long reign may have put that in jeopardy. Take Saudi Arabia’s Crown Prince Muhammad Bin Salman (MBS), 33, for example. In March 2017, when he was deputy Crown Prince, MBS was invited to the White House to meet with US President Donald Trump and his son-in-law and policy-adviser Jared Kushner to discuss US-Saudi bilateral ties, weapons deals and foreign policy moving forward. Neither King Salman nor his former Crown Prince Muhammad Bin Nayef had ever gained a private audience with Trump at the Oval office, but the then-third in line to the throne did – fostering the bilateral bromance that we unfortunately see today.

The identity of the heir to Oman is still up in the air. What is certain is that the Sultanate will shift branches from Sultan Qaboos’ Bin Said to the Bin Tariq branch of the royal family. Sultan Qaboos’ cousin Asad bin Tariq, who is the Sultan’s deputy Prime Minister and “special representative” at international summits, is rumoured to be next in line. However, Asad bin Tariq does face stiff competition from his half brothers Haitaim bin Tariq, an Oxford Foreign Service Programme alumni and the Culture and Heritage minister, and Shihab bin Tariq, a close adviser to Sultan Qaboos and a former naval commander. A wildcard in the race could be Asad’s 37 year old son Taimur bin Tariq. While Taimur has yet to prove himself in governance, his name on the envelope would continue the recent Gulf trend of passing leadership to the new generation as seen with MBS (33) in Saudi Arabia and Emir Talal Al Thani (38) in Qatar. My money would be on Haitam.

It now remains to be seen what will become of Oman in the coming years. So far, Oman has been able to comfortably balance its relations with the United States, Iran, Israel and the Gulf Kingdoms – an unprecedented diplomatic masterstroke. However, the region is once again heating up. Since the other Gulf Kingdoms’ embargo of Qatar in 2017, cracks have started to deepen within the GCC. The Yemeni Civil War is devolving into a quagmire for the Saudis and the risk of the conflict bleeding into southern Oman remains high.  Oman’s increasingly fruitful energy relationship with Iran has also started to worry the House of Saud and the Trump administration.  An impending succession crisis, which is ripe for foreign tampering, could trigger a seismic shift in Oman’s diplomatic trajectory.

Oman’s foreign policy doesn’t make headlines, but that’s the point – it centers around discretionary quiet diplomacy. While it’s no military juggernaut like Saudi Arabia or Iran, it plays a critical mediatory role in the troubled MENA region. For the West, it’s proven to be an effective negotiator for citizens kidnapped or incarcerated in war-zones and westernphobic states. To the world economy, it’s the gatekeeper of the Gulf of Oman, where 30% of oil supply flows through. As the only Gulf state that has positive relations with Saudi Arabia, Israel and Iran, Oman can bring all conflicting parties to the table. Muscat has the potential to effectively mediate the Palestine-Israel conflict, a far better and more welcome option than the United States. Should the Saudi-Iranian cold war heat up, Oman could be the only voice to which both sides would listen since the iron curtain has already been drawn in the region. The new Sultan will have nearly half a century of expectations to live up to. The question is, will he continue Sultan Qaboos’ diplomatic legacy or break from tradition and carve out his own?