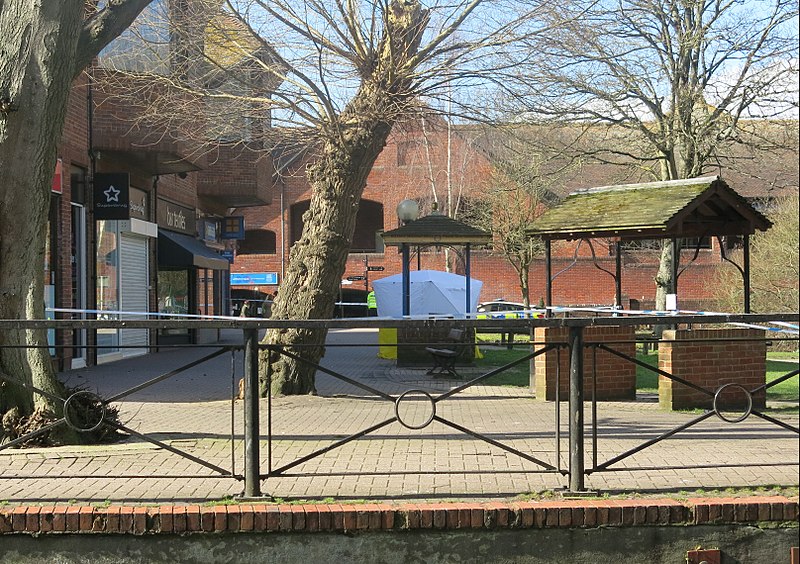 The Maltings, Salisbury. The white cover is over the bench where Skripal was found on Sunday following a poison attack. Source: Wikimedia Commons https://bit.ly/2JRpdJ0
Share

In early March, Sergei and Julia Skripal were found unconscious on a park bench in Salisbury. What looked to passers by like a pair nodding off after a night out were eventually recognized by a passing doctor and nurse to be victims of poisoning by an aggressive nerve agent. Sergei was an ex-Russian double agent who made it to the UK as part of the spy swap that followed the 2010 Illegals Program spy swap in which ten Russian spies were discovered living under cover in the United States. Russia maintains that they have nothing to do with the attack. The Russian Embassy in the UK released the following statement shortly after the attack: “the media are swiftly launching a new phase of the anti-Russian campaign ongoing in the UK. Readers are offered various speculations which ultimately lead to a vilification of Russia… We believe that the British authorities and law enforcement bodies should step in immediately and inform the Embassy and the British society about the actual circumstances of this incident, so as to end the demonisation of Russia.”

Theresa May has tried to take a hardline stance on the Skripal’s poisoning. Immediately after the incident, she and her government accused Russia of being behind the attack. According to May, Russia believes it can murder its former citizens on British territory “with impunity.”

If Russia is behind the attack, it would not be without precedent. The incident itself recalls the 2006 assassination of former FSB officer Alexandr Litvinenko by means of radioactive polonium. A recent investigative report by Buzzfeed identifies 14 attacks on individuals with old ties to the Kremlin in recent years, although none were directly attributed to Moscow. More pertinently, the British military laboratory Porton Downs has identified the nerve agent as a member of the family of substances called “Novichok.” These nerve agents were developed in the USSR to evade UN restrictions on chemical weapons and to be undetectable by sensing technology. The nerve agent is easy to transport relative to its toxicity because it can be stored as two non-volatile component compounds that are later synthesized. In light of these findings, it seems highly plausible that Russia is behind the attack.

Plausibility, however, is not enough to support a conviction. Britain’s reaction to the crisis has been dogged by its tendency to overzealously substitute certainty for suspicion. First, direct accusations against Russia have left leaders looking ill-informed. Theresa May’s tough stance was blunt, but not obtuse; it can be understood as an attempt to avoid looking weak, as was the case when Britain failed to act when the 2006 Litvinenko poisoning led back to Russia. However, a line was crossed when Boris Johnson echoed her statements but went a step too far and left no room for doubt, saying that the nerve agent “categorically” came from Russia. In fact, a statement from  Porton Downs, the military laboratory testing the substance, says that that the laboratory cannot be certain of the chemical’s origin. As the BBC writes, the statements left Johnson with “egg on his face.”

Russian media, alongside Foreign minister Sergei Lavrov, were quick to take advantage of the incohesion in Britain’s public reaction. For example, the deletion of a Foreign Office tweet asserting Russian culpability and Labour leader Jeremy Corbyn’s attacks on Boris Johnson’s premature statements have made the British position look disorganized at best and unfounded at worst. The Russian media’s message has been that the backtracking on original claims is proof that Britain was originally mistaken about Russian culpability.

Besides speaking to soon, Britain responded by gutting diplomatic relations in a theatrical display of reaction rather than hitting Russia where it matters. The diplomatic crisis in which UK diplomats were withdrawn from Russia and Russian diplomats from the UK was a spectacle that realistically puts little pressure on Russia. If May insists on taking action, she needs to use the strategy she herself has said would be the most effective: freezing the assets of wealthy, corrupt Russian oligarchs in the UK. London has a reputation for its “no-questions-asked” attitude towards foreign money that’s made it a haven for foreign tycoons. This is the decisive action Britain failed to take after Litvinenko’s murder, and is failing to take again. This move would strike at the heart of the Russian oligarch class and put real pressure on political elites to reconsider murders on British soil. As strategist Timothy Ash told CNN, “I’d say the bulk of Russian wealth goes through London in one way or another,”

Given Brexit negotiations’ effects on the current political climate, it makes sense that May wouldn’t be willing to risk the economic relationships that support both London and the British economy. Not only does foreign investment buoy London’s growth, but trade between the UK and Russia is worth 14 billion per year, and British oil company BP has a 20 percent stake in Russia’s state-owned oil company, Rosneft. Although it’s the best card May holds, it will admittedly be difficult to play. That said, her choice to gut the diplomatic corps that would have insulated such a move is a step backwards. If Britain wants to make the bold assertion that Russia is indubitable to blame for the attacks, they ought to at least back it up with an effective policy. Right now, they’re talking loudly and carrying a twig.