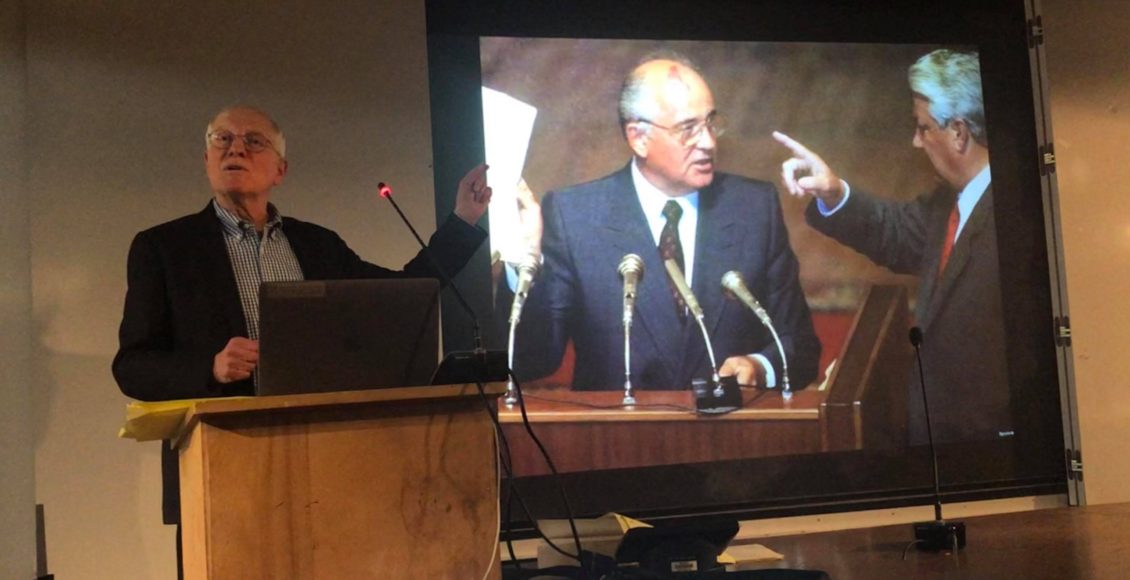 On November 1st, the Yan P. Lin Centre, in collaboration with the McGill Department of Languages, Literatures, and Cultures, welcomed Dr. William Taubman to McGill University to present a talk titled “The Rise and Fall of Mikhail Gorbachev — And Some Lessons for the Putin Era.”  Dr. Taubman is currently a professor at Amherst College and is well recognized for his biography of Nikita Khrushchev, which earned him a Pulitzer Prize in 2004 and the National Books Critics Circle Award in 2003. His latest biography, “Gorbachev: His Life and Times” took over a decade to write, and presents an extensive look into Mikhail Gorbachev, compiled through meticulous research, including the opportunity to meet Gorbachev on several occasions. This biography, therefore, serves as a critical backdrop for Dr. Taubman’s lecture at McGill. I had the chance to meet with Dr. Taubman prior to the event to ask a few questions regarding Gorbachev’s leadership of the Soviet Union. As such, the following seeks to incorporate what I have learned in speaking with Dr. Taubman and attending his lecture, in order to draw importance to Gorbachev’s legacy.

The main lesson to be taken from Dr. Taubman’s talk is how important Mikhail Gorbachev’s personality and character are in helping to understand his impact in the final days of the Soviet Union. Characterized as an individual leader, Gorbachev transformed Soviet totalitarianism into a set of socially and economically liberal policies intended to reform the Soviet system. His administration oversaw a collaborative East-West alliance and the formation of a society capable and free to express grievances regarding its government.

Approximately six years following Gorbachev’s election by the Politburo, several republics constituting the Soviet Union declared their independence, triggering a domino effect among Soviet states. As a result, Gorbachev presided over the collapse of the Soviet Union after nearly seventy years of its existence. Several incidents are indicative of a Gorbachev critical of the vision of Communism championed by Soviet leaders prior to him. In 1987, Gorbachev gave an address at the Kremlin, where he called Stalin’s crimes “unforgivable” while simultaneously supporting his collectivization and industrialization methods. Gorbachev’s actions interestingly point to him as a man who wished to save, instead of completely tear down, the Soviet system. So, where did it all go wrong? And, was it Gorbachev’s fault?

‘The History of the World is but the Biography of Great Men’: Who was Mikhail Gorbachev?

Gorbachev’s influence has had a decisive impact on history. His unique life philosophy and personality are critical factors in explaining how he was able to achieve unprecedented levels of reform in the Soviet system, and why he viewed such improvements as important.

Born in what Dr. Taubman describes as “terrible times”, Gorbachev lived through famine and several collectivization efforts under the Stalin regime, in addition to the 1942 Nazi occupation of his hometown village in Privolnoye, Russia. Dr. Taubman recounts how, despite this, Gorbachev was able to emerge as a man of confidence and optimism, who still retained trust in others. Such characteristics developed naturally through his relationship with his parents—his father’s supporting attitude and his mother’s harsh personality—which contributed to Gorbachev’s earnest leadership.

When Gorbachev attended Moscow State University, he developed a friendship with Zdeněk Mlynář, a Czechoslovakian exchange student, who would later go on to inspire the 1968 Prague Spring. Mlynář is described by Dr. Taubman as an “idealistic Communist,” and, with Gorbachev, would come to grow skeptical of the Soviet system under Stalin. The Great Purges, coupled with acts of “classicide” and deportation in the Stalinist era, made people fear and distance themselves further from the state. University was, therefore, a defining time for the development of Gorbachev’s reformist attitudes. It seemed obvious to him that the Stalinist era represented a dark and brutal time in the Soviet Union’s history, which did not serve the needs of the people and the Communist vision as it should have. In fact, Dr. Taubman tells an anecdote from Gorbachev, where he recounts attending a Stalinist musical comedy portraying “happy peasants bringing in the harvest,” Gorbachev making note that they would not be doing so had they not been forced.

Scene from Ivan Pyryev’s Soviet musical comedy Трактористы (English: Tractor Drivers), 1939. The movie depicts the return of tractor drivers to the Soviet Union from the East, following their service in the Soviet-Japanese border conflict. The clip shows the friendly collective of tractor drivers participating in a joyous celebration, demonstrating their unity and sense of camaraderie. A year prior to the film’s release, several military leaders were executed in Stalin’s Great Purge (1936-8), including Marshal Vasilii Bliukher, who led the successful invasion of northern Manchuria in 1929. Tractor Drivers is but one film depicting state propaganda at the time.

How did Gorbachev become the leader of the Soviet Union?

While many point to Gorbachev’s visionary attitude as a reason for the Soviet Union’s demise, it must not be forgotten that his forward-thinking ideas were actually what made him rise among the ranks. This is important to note, especially considering that by the time Gorbachev became the leader of the Soviet Union, Nikita Khrushchev had already denounced Stalin’s actions in his Secret Speech and the process of economic reform had already undergone several efforts under Leonid Brezhnev. In 1970, Gorbachev was named regional party leader of Stavropol, later going on to become appointed as Secretary of the Central Committee in 1978. His rise in the political scene was perceived positively by his peers, many viewing him as part of the “new Soviet Union”—Gorbachev was, as Dr. Taubman describes, “the ideal product of Communism: he was honest, hardworking, and incorruptible.” By 1985, the Politburo elected Gorbachev as General Secretary of the Soviet Union. His election followed the USSR’s leadership under Yuri Andropov and Konstantin Chernenko, who both died while in office. Gorbachev was the fresh and vigorous leader the Soviet Union needed, but party members did not expect him to implement the kind of reform he eventually did.

Gorbachev’s main mission was ultimately to democratize the country—he pursued this goal through progressive policies, including the most notable glasnost and perestroika reforms. However, things quickly began to crumble. Amongst other factors, Gorbachev’s reform agenda was undermined by his ignorance of the strong force of nationalism developing throughout the Soviet bloc, inter-party conflicts which he failed to suppress, and a series of unintended negative economic consequences of the country’s transition from a command to a market economy. By August 1991, the coup against Gorbachev by hardliners within the party established granted more legitimacy to Boris Yeltsin, who would become the first leader of a post-Soviet Russia.

In December 1991, Gorbachev resigned from his position and, shortly after, the Soviet Union collapsed. Under his administration, Cold War tensions diminished, the Soviet Union saw its first free and fair election with the rise of freedom of speech, and the threat of nuclear holocaust was reduced. Despite this, Gorbachev could not keep the Soviet Union intact. Dr. Taubman makes note of how, as a result, Gorbachev came to be “viewed as great statesman in the West, but largely despised in his own country.” This sympathetic view of Gorbachev portrays him as a ‘King Lear’ type of figure: losing his country by trying to save it.

Gorbachev’s policies and downfall beg the question: is democratic reform possible within Russia? Dr. Taubman observes how “the lesson of Gorbachev’s rise and rule was that, despite centuries of despotic rule, Russia proved itself (for a while) to be moving towards Western democracy.” It is possible that without Gorbachev’s implementation of a democratic model within the country, the Soviet Union’s ethnic tensions towards its final years could have disintegrated into a conflict reminiscent of the Yugoslav Wars. However, in losing the country, Gorbachev’s democratization efforts could not be established concretely and permanently in its post-Soviet era. In this regard, his hope to democratize the country is described as “optimistic, confident—maybe too much so,” by Dr. Taubman.

What is in store for Russia?

Recently, many scholars, including Dr. Taubman, have pointed to the emergence of a ‘New Cold War’ in the global political scene. There is an overarching sense of a growing East vs. West divide, notable in the rise of anti-American attitudes prevalent in Russian media, and vice-versa in American media. While the traditional sense of the term ‘Cold War’ implies a strict ideological global divide, contemporary political events point to a divide that is more geopolitical than ideological. This is best exemplified in the contrasts between NATO, EU, and American forces, versus Russia, China, and perhaps other emerging powers that make up the BRICS alliance.

Within Russia specifically, Vladimir Putin’s nationalist and patriotic political attitude has not gone without reward. Gorbachev himself was cast by the public and his political rivals as a weak leader when conditions progressively deteriorated in the Soviet Union, and this portrayal is something Putin and his allies have relied on in order to project themselves as powerful and rational leaders in the public eye. In fact, the theory that it is a “necessity” for Russians to be ruled by a strong leader dates back centuries and is even debated to this day. As pointed out by Dr. Taubman, this so-called need to be ruled is in stark contrast to Gorbachev’s governing philosophy, which held that he “trusted the Russian people to govern themselves.” Gorbachev once stated: “a czar must conduct himself like a czar. And that, I don’t know how to do.”

In regards to a more democratic future for Russia, Dr. Taubman and Gorbachev believe that it will take time for this to truly manifest. After asking Dr. Taubman whether he believes that the rise of the opposition in the recent Moscow City Duma elections is a sign of reform, I was told that while such results point to a rising tide among progressive forces in Russia, they are not significant enough to indicate country-wide reform. Gorbachev himself has stated that it might take Russia all of the 21st century to become truly democratic. In his closing remarks, Dr. Taubman mentioned that, if pro-democracy forces eventually do succeed, “they will look back on Gorbachev as the man who initially opened the door.”

A special thank you to Dr. Taubman and Professor Anna Berman for making this article possible.