Why isn’t the Trump Administration Doing Anything About Hong Kong? 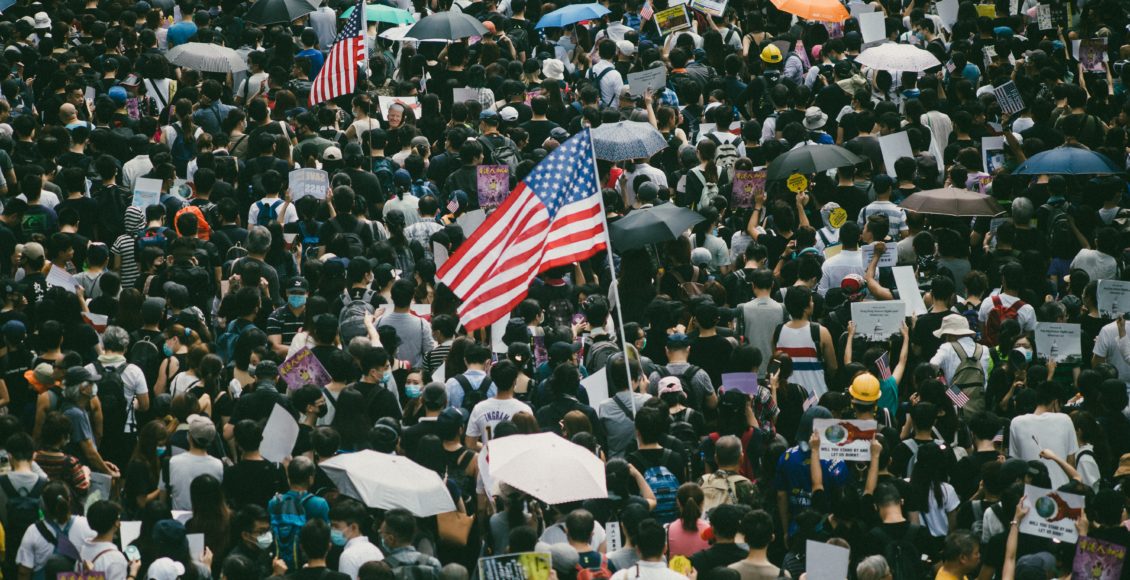 Hong Kong Protesters waving the American flag as a part of a larger attempt to sway American opinion towards the protesters. (Photo by Joseph Chan on Unsplash)
Share

Earlier this year on September 6th, a group of Hong Kong protesters known as Action Free HK Montreal gave a letter to the United States Consulate General of Montreal to be delivered to the US House and Senate. In it, Action Free HK Montreal requests the passing of the “Hong Kong Human Rights and Democracy Act” (“The Democracy Act”) that would assist Hong Kong refugees, noting that “Hong Kong… has always shared the same core values with the U.S. and other western countries with regards to the rule of law and human rights.”

This plea from Hong Kong protesters to the US government is just one of many overtures that have been made to the West to attract international support since the anti-government protests began earlier this year in June. By waving the American flag, singing the US national anthem, and making personal pleas for President Trump to “liberate” Hong Kong from the more authoritarian People’s Republic of China (PRC), protesters have clearly voiced their desire for American intervention.

The passing of the “Democracy Act” would reaffirm the United States’s commitment to ensure Hong Kong remains autonomous while making it easier for Hong Kong citizens to apply for visas to come to the US. Indeed, the bill has bipartisan support among both Democrats and Republicans, hinting that it could pass in both chambers.

Yet the biggest uncertainty right now is whether or not President Trump will support the bill. Despite Senior Counselor Kellyanne Conway’s claims that Trump supports the protesters, he has been notably haphazard about their cause, at times urging Beijing to refrain from violence, and at other times referring to the protesters as “rioters”, stating “Hong Kong is a part of China, they’ll have to deal with that themselves” back in August. Even if the bill is signed and put into law, there is little evidence that the Trump administration has the will to use measures such as sanctions on individuals responsible for suppression or an annual review on Hong Kong’s autonomy.

For the supposed “Leader of the Free World”, President Trump has been incredibly disorganized and unpredictable in his handling of this issue. Trump’s positions, or lack thereof, don’t line up with previous US policy on China nor with his own more hawkish rhetoric over Venezuela or Iran.

So what makes Hong Kong so much more complex? Ultimately, Trump’s policy on Hong Kong can be viewed through the lenses of the ongoing trade war and negotiations with China, and his administration’s general apathy towards human rights abroad.

Trade and commerce with China has been a controversial subject in US politics since at least the 1980s. Since then, the US has consistently run a trade deficit with the PRC, wherein the US has purchased more goods than they’ve sold, worrying domestic producers who fear they are unable to compete with the goliath of Chinese industry. Furthermore, China has often failed to enforce American intellectual property rights laws, leading to hundreds of billions of dollars in annual losses for the US. To make matters worse, China has been accused of unfairly subsidizing their domestic industries as well as imposing barriers such as tariffs or oblique rules for US businesses who would like to export to China.

It was for these reasons Trump initiated his trade war in March of 2018 by slapping a 25 per cent tariff on steel onto Chinese exports. However, trade wars are infamously difficult to win, often resulting in tit for tat tariffs and no side gaining a distinct advantage. Furthermore, the US is very much reliant on its imports from China, so implementing Trump’s proposed tariffs has the potential to greatly damage the US economy. Therefore, with tariffs being an unreliable diplomatic tool, the administration has had to look elsewhere for leverage – namely, Hong Kong.

China is also seeking to end the current trade war to limit damage to their own economy. Some have argued that Trump is using Hong Kong as a bargaining chip – if the protesters are brutally suppressed, so the logic goes, he’ll walk out of negotiations. Yet there is a better case to be made that the president is purposely avoiding bringing up Hong Kong in order to better improve his chances of acquiring a deal. Should trade talks fail, and tariffs are implemented, the US economy would begin to feel the pain right before presidential elections in 2020 – and with the president’s prospects of re-election depending on his supposedly excellent stewardship of the economy, Trump may not be willing to take any chances.

Yet the notion that Trump is a brilliant statesman playing 6-D Chess against Xi-Jinping may seem like a bit of a stretch for some. There is another possible reason why the Trump Administration is not pushing a pro-democracy and/or pro-human rights message on Hong Kong – the president simply doesn’t care.

Human rights have been an extremely important part of US foreign policy since the end of World War II, serving as the casus belli for several military interventions. Previous US administrations have been willing, some of the time if not always, to criticize China over its human rights record. From H.W. Bush imposing administrative and legal constraints on trade after the Tiananmen Square Massacre in 1989, to Hillary Clinton’s famous “Women’s Rights are Human Rights” speech in Beijing, to Obama’s request for a dialogue over Tibet; human rights have played an important, albeit controversial, role in all recent administrations, both in relation to China and in general.

However, the Trump Administration consistently fails to demonstrate any concern for human rights in all but the most extreme scenarios. Trump has struck up friendly relationships with despots in Turkey, the Philippines, and Egypt. He’s overseen massive cuts in foreign aid to NGO programs in organizations such as the UN. He’s ensured that the US continues to sell hundreds of millions of dollars worth of weapons to Saudi Arabia for their bloody and brutal war against Yemen. He’s failed to bring up human rights during his meetings with Kim Jong Un of North Korea, or Vladimir Putin of Russia, in spite of these leaders’ very poor humanitarian records. Moreover, calls from Secretary of State Mike Pompeo for “fresh thinking” on human rights are seen as a thinly veiled attempt to downplay the need to re-inject human rights discourse into American foreign policy.

This is all to say that the Trump administration clearly doesn’t feel human rights have an important role in American foreign policy if any role at all. Human rights rhetoric has been replaced by an “America First” policy that merely seeks to rewrite the rules of trade in the United States’s interest. This marked shift can be seen as a direct result of Trump’s own personality rather than any greater movement.  Republicans and Democrats in Congress are very much concerned about the current situation in Hong Kong – it appears to just be Trump who is indifferent.

It remains to be seen whether the Trump Administration’s decision to not involve itself in the current Hong Kong protests is an anomaly or a sign of US foreign policy to come. In the context of a rising China that will overtake the US as the world’s largest economy within several years, one could interpret this as the US already being unable to challenge Beijing’s authority. There have already been accusations that Obama kowtowed to the PRC on issues of human rights and failed to adequately bring up such issues publicly. It could very well be that Trump’s stance is a continuation of this trend and that American human rights discourse, along with US clout in general, are slowly evaporating in global politics. Furthermore, China’s growing presence on the international stage will make it very difficult for any president to challenge Beijing without endangering much-needed cooperation on vital issues such as climate change.

The opposite could also be argued, however, if one looks at the foreign policy platforms of other prospective presidential candidates. Trump has had an extraordinarily unique presidency. His indifference to human rights abroad is more likely unique to him, and not a sign of mounting presidential apathy. From Bernie Sanders to Joe Biden, it is clear that other prominent American politicians still value human rights and are intent on challenging China over Hong Kong. What’s more, it is important to remember that diplomacy is multi-faceted – it is possible to create a dialogue over both human rights and trade/climate change cooperation.

Both the future of American foreign policy and the eventual outcome of the Hong Kong protests – if they’ll dwindle and gradually die out or be violently smashed by Beijing – is unclear at the time of writing. Yet what is clear is that whatever the outcome, for one of the first times since the end of World War II, the “Leader of the Free World” will have been absent during such a consequential event.