#WhyIDidntReport: Hashtags as Action and Inaction 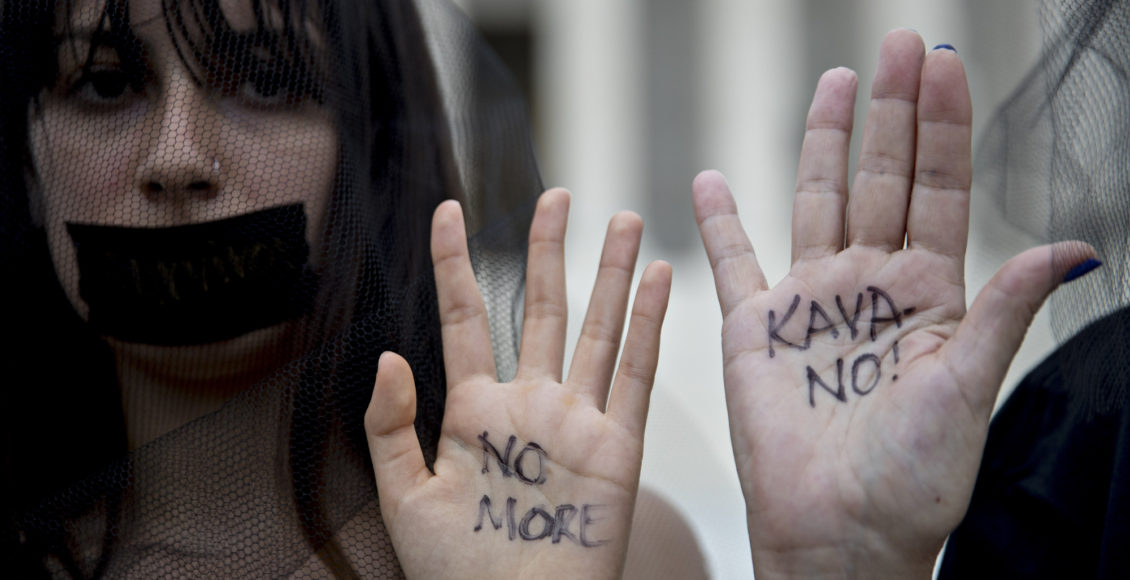 Demonstrators opposed to Supreme Court Associate Justice Brett Kavanaugh stand outside the court with "No More" and Kava-No" written on their hands in Washington, D.C., U.S., on Saturday, Oct. 6, 2018. Kavanaugh was confirmed to the U.S. Supreme Court after one of the most ferocious confirmation battles in history, overcoming allegations of school-age sexual assault and claims by Democrats that he was dishonest in Senate hearings. Photographer: Andrew Harrer/Bloomberg https://flic.kr/p/2bJWqJN.
Share

In mid-September, Dr. Christine Blasey Ford—a research psychologist and professor at Palo Alto University in California—came forward in an interview with The Washington Post to reveal that she had been sexually assaulted by Supreme Court nominee Brett Kavanaugh while they were both in high school in Maryland. Originally wishing for anonymity, Dr. Ford’s allegations had been reported to Senator Diane Feinstein of California in a letter almost six weeks prior. Reluctantly, due to circumstance, she assigned her name to the allegations and came forward publicly in the week before the interview, drawing a huge (and unwanted) public reaction.

Among Republicans, one of Ford’s most outspoken critics was President Trump himself. In a Twitter onslaught on September 21st, Trump targeted the “convenient” timing of Ford’s testimony in a dismissive tweet speculating that “if the attack on Dr. Ford was as bad as she says, charges would have been immediately filed with local Law Enforcement Authorities.” Later that day, actor Alyssa Milano responded to Trump’s tweet with her own experience with sexual assault, detailing her delayed public response to the trauma and asking other survivors to respond with the tag #WhyIDidntReport. Initially started in 2014 on Twitter, the hashtag has seen a huge revival since Milano’s tweet, with thousands of survivors rallying to share their experiences of shame, fear, and disbelief surrounding sexual assault and harassment.

The Force and Function of Hashtags

By design, hashtags tag relevant words in a tweet and categorize those tweets into a larger group. While often used to connect users with common interests, they also serve to galvanize users around a particular event or current issue. Their function as a collator promotes the ability to gather singular stories and create a much larger – often more impactful – narrative of a collective. Acting to form a free-access space to share often muted stories, they create what Northeastern University’s Associate Professor Sarah J. Jackson calls networked counterpublics: ad-hoc social communities of those voices that might otherwise believe themselves to be singular. Forming networks across space and time, this simple social media function expands into a realm for democracy that can lend its voice to the underprivileged, intersectionally.

Spurred by an accusation by the most powerful man in the country, #WhyIDidntReport seeks to create a narrative of its own. Users of both genders, many ethnicities, all ages, many different circumstances of life: all telling their stories of what prevented them from reporting sexual violence or harassment. Stories of abusive relationships, infant attacks, fear of not being believed, protection of the attacker, the shame of admittance, self-blame, and other power systems serve to disrupt this ignorant binary of reporting a crime. Now a voice loud in numbers, #WhyIDidntReport proves that it is just not as simple as “tell someone.”

The recent revival of this hashtags comes on the heels of many others that have functioned similarly. #MeToo—now a movement that has manifested in nationwide protests and massive public discourse—began concretely at a Philadelphia non-profit Just Be, Inc. and then online as the allegations against Harvey Weinstein emerged in 2017. #WhyIStayed was created by domestic violence advocate and writer Beverly Gooden in 2014. Responding to the domestic violence controversy surrounding footballer Ray Rice and his then-fiancée Janay Palmer, it served as another disruption to the victim-blaming narrative. In a similar vein to #WhyIDidntReport, #BeenRapedNeverReported was a 2014 Canadian hashtag started by Montreal Gazette reporter Sue Montgomery in response to cases against former CBC radio host Jian Ghomeshi. All beginning with some individual voices online, these online functions have gained the force of entire social movements.

While hashtags like #WhyIDidntReport have been a galvanizing force in the creation of these transnational empowerment movements and counterhegemonic public spaces, they do not come without their limitations. Firstly, the nature of social media as quick and eye-catching begs the issue of reductionism. The fact that lifetimes of oppression or trauma can be abbreviated merely into a “trend”, only paid attention when they’re popular or go “viral”, means that these movements may be artificially surface-level and merely temporarily in full-view.

Concerning access to the platform, it is important to point out the problems inherent to the “public sphere theory” of universal democracy on the Internet. There still remains a sizable portion of the world population that do not have access to an Internet connection—or alternatively, an unrestricted Internet connection—in order to access Twitter. Even when people do have access, not all users are heard equally. Not everyone wants to hear these stories or counter-narratives. And, with these movements concerning sexual abuse or harassment in particular, not everyone may be ready to share.

What appears to be the ultimate limitation of hashtags as social movements is the issue of translation into action. American society seems to be stuck in a transitional period of new media: the force of hashtags has been recognized and the narratives draw significant attention, but no-one in power is willing to do anything about it. In the case of #WhyIDidntReport, some senators sitting on the Judicial Committee admit to believing Dr. Ford’s story, but they are unwilling to act with any consequence in that direction. Instead, they question her motives and blame party politics.

Hashtags are beneficial in that they encode individual stories into a collated space and narrative: where the affected can see that they are not alone in these issues and where the unaffected are impacted by these harrowing stories as a collective. However, hashtags have not yet achieved true decoding: where these movements online have translated offline into concrete legislation or decision-making that considers this new consciousness. The Kavanaugh case only highlights the fact that society has not yet made the step from discussing these stories to acting against them.

Some progress is clear, though, especially in the popular comparison with the Anita Hill case. Hill – a professor too, at the University of Oklahoma – came forward in 1991 alleging sexual harassment from then-nominee Clarence Thomas when she had worked for him. In her case, not only was she not believed to be truthful in her story, but her case was even dismissed by senators to have little relevance to the confirmation proceedings of a Supreme Court nominee at all. This stands in noticeable contrast to this 2018 hearing, where no senator on the committee has admitted publicly to not believing that Dr. Ford is telling the truth. Some Republican senators—and the President—have questioned her memory of the attacker and her motives in coming forward at this time, but none have dismissed her as a liar.

However, while the attitudes of the two hearings have noticeably changed, the results are the same. This time, instead of the two sides of the he-said-she-said being men versus women, unassuming Dr. Ford seems to be lodged into a deep partisan conflict. Lawmakers, once again, are deferring concrete action on this social issue; this time, by making it about party politics.

Clearly, society seems to be stuck in this limbo of hearing but not acting. Hashtags like #WhyIDidntReport appear to have an impact on attitudes, but no structures of power appear to be toppling. While #MeToo spurred huge protests and empowered more survivors to come forward, lawmakers and people in positions of power still view the hashtag as a spectacle: something to be heard, sometimes acknowledged, but always brushed aside or shrugged off.

#WhyIDidntReport perfectly highlights this frustrating inaction plaguing hashtag movements: a hashtag exposing the supposed inaction of survivors due to certain structures of power serves to expose the inaction of the perpetuators of those very structures of power. No one is able to move because those who are without power are silenced and those with power want to keep it. How many Dr. Fords are going to have to sacrifice their sanctuary, privacy, and mental well-being to come forward in order to break this cycle?