Will the Paris Climate Agreement Change Anything? 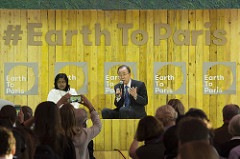 The Paris Climate Agreement puts new pressures on developing countries that are already rising to meet them, while renewing force on developed countries to focus their resources on reducing carbon emissions. The plan prioritizes countries that contribute a large portion of the world’s greenhouse gasses. It seems likely that countries like India and China will meet their goals, but the success of this plan really hinges on the ability of western countries to mobilize their governments to put research and resources into addressing climate change.

The Paris Climate Agreement was opened for ratification on April 22nd. In order to be valid, countries producing 55% of the world’s greenhouse gas emissions must ratify it. As of October 11th, 76 countries, producing 60% of emissions, have ratified the agreement. This means the agreement will be put into practice on November 4th. Unlike past climate reforms, the Paris Agreement calls for the participation of developing countries and asks 100 billion dollars to be mobilized by 2020.

The agreement outlines specific goals for individual countries, including quinquennial reviews to check progress. This differs from the Kyoto Protocol, which set broad goals on reducing emissions. The over-arching goals are to put average climate increase under 2C, to peak greenhouse gas emissions, and to reach a balance between greenhouse gas producers and reducers. Once ratified, countries have to wait three years before they can withdraw from the deal.

Because of their size, countries like India and China produce a significant portion of the world’s CO2 emissions This means that this agreement expects much more of them than in the past. However, when looking at per capita data, China and India produce less than other developing countries, and only a fraction of what developed countries produce per person. While it is important to encourage a switch to renewable resources, it should be noted that reducing consumption contributing to world emissions is more pressing, and that responsibility lies with rich developed countries.

Large developing countries have actually made larger strides than many developed ones. Both China and India have largely invested in renewable resources without UN set goals. India has made significant strides to introduce renewable resources in the past. They were one of the first countries to have a ministry of non-conventional energy resources. Since then, they have continued to invest in sustainable development; India has plans to double wind power and increase their solar capacity by a factor of 15 by 2016. Their current prime minister, Narendra Modi, has stressed the importance of fighting climate change. India’s action plan includes reducing climate change by 33-35% and increasing their clean energy share by 40%. The progress made by India and China contrasts what many people believe. Because they are each nearly a seventh of the world population, they still contribute a significant portion of the world’s greenhouse gas emissions despite their efforts to reduce them. This contrasts with developed countries who have simply failed to make large strides in reducing their emissions.

Many developed countries fail to grasp the importance of climate change on a broad scale. Canada has been committed to the Kyoto Protocols and has failed to meet its goals. They were expected to have a 6% reduction in greenhouse gas emissions from 1990 levels. Instead, there has been a 24% increase. While a significant portion of Canada’s energy comes from renewable resources, they fail to decrease their overall consumption due to the government’s lack of prioritization. The current liberal government has committed to another climate agreement and will hopefully be able to maintain support. This, coupled with the commitment of other developed countries, is vital to achieving the goals set by this agreement.

While continuing to rely on manufacturing as a large source of their economy, developing countries are investing in renewable resources. This differs greatly from the industrial period that most developed countries experienced. Their institutions and infrastructure were created without knowledge of the harm that greenhouse gasses can do to our planet. As manufacturing develops today, investors are able to consider greenhouse gas emissions, and encourage renewable sustainable development. This gives the developing countries a certain advantage in sustainable development. The aid that this agreement provides will hopefully enable them to continue to grow while keeping greenhouse gas emissions under control.

This agreement is an important step for addressing the world’s environmental concerns. The provisions made to fund developing countries are important for the world moving forward. It also ensures that these countries are able to prepare for the dangerous associated with the changing climate. However, like deals in the past, this agreement will fail if developed countries do not step up and take responsibility for their contributions to world greenhouse gas emissions.