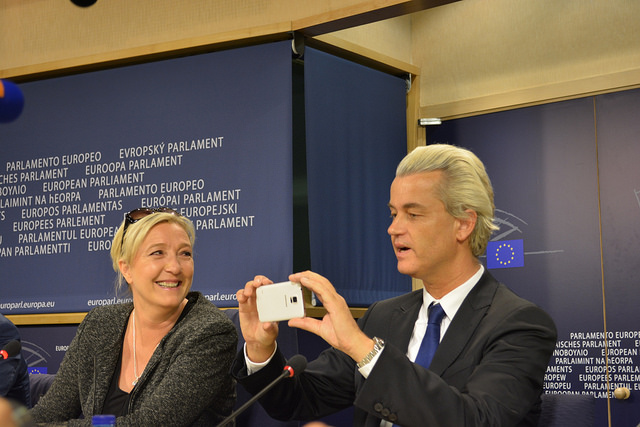 This could be the year that changes Europe as we know it. With federal elections slated for the next twelve months in some of the EU’s key members, the region could find itself under very different leadership with much different plans from those now in power. In one year’s time, the French will have a new president, the Germans could have a new chancellor, and as we are already aware, the Dutch may have averted their own version of Donald Trump, but are now faced with a coalition government reinforcing the fact that their peroxide-blond haired politician is not going away anytime soon. The bottom line in all of this is that the right-wing populists do not have to win the elections to emerge as victorious. In fact, they have already “won” these elections, regardless of their outcomes, simply because they have challenged the status quo. From the words of Geert Wilders himself, “the genie will not go back into the bottle.” The movement has begun, and their time will surely come. Mark Rutte may have defeated Wilders, but Wilders represents an idea, and one that will not simply disappear. The ideas, not the candidates themselves, are the major red flag for Europe.

The Dutch kicked off this tumultuous year on March 15, with their election bringing out the most buzz due to the eccentricity of Wilders himself. The leader of the Partij voor de Vrijheid (Party for Freedom) is a radical right-wing, anti-religious, xenophobic criminal, and yet he is someone many Dutch voters wish to see leading their country. His hate speech directed towards Islam is absolutely appalling and it is a black eye on the Dutch judicial system for letting him off with a simple slap on the wrist after the rhetoric he spewed was claimed to fall under his “freedom of speech”. This is simply indicative of the fact that there are problems at the core of Dutch society that go far deeper than the man and the rubbish that leaves his mouth.

The campaign process for the upcoming elections have taught us that the Netherlands is an inherently divided nation. This exists particularly amongst the liberals for which it has developed its reputation over the years and the radical conservatives that have been hiding in the shadows waiting for a moment such as this. It is often foolish to place a single individual as the key precipitating factor in a political movement, but in the case of the current anti-establishment swing absorbing the West, it is fair to identify Donald Trump as the aforementioned factor in these circumstances. Without Trump’s victory in the American election, the energy coming from the far-right that is now consuming Europe would be nowhere near as intense. Wilders would be just another Dutch parliamentarian thinking his evil thoughts but too afraid to put them into action. This is Trump’s work.

Although Wilders lost to the incumbent, his “Rutte has not seen the back of me” comments shortly after the exit polls confirmed his defeat are eerily fitting for the new Dutch government about to take shape. As he knows all too well, a coalition government is to follow as Rutte’s VVD did not win a majority (something which has never happened in the Dutch parliament), and although the mainstream parties of the Netherlands have ruled out working with his party, Wilders has already pushed the political centre of gravity to the right. So, he and those on his party list will find themselves in parliament very soon, and we could very well see the Dutch taking an anti-immigration, anti-EU stance in the upcoming years just as Wilders had hoped for.

In April, the French will follow. Despite lacking a figure as dangerous as Wilders, the situation they face is no less bleak. With five major candidates at the helm, opinion polls see this election as shaping up to be a two-horse race between François Fillon of the centre-right Les Républicains, and Marine Le Pen of the far-right Front National. Following in the footsteps of her father Jean-Marie, she hopes to lead the party to a runoff as he did in the election of 2002. However, she is admittedly more democratic than her father and has softened the party’s image through a process of “de-demonization,” involving the dismissal of racists, anti-Semites, and Pétainists from the ranks. Nevertheless, she remains a major challenge to the status quo that is the liberal, free trade-infused European community. Le Pen’s affinity for protectionism in the face of what she sees as an era of globalization that is destroying the independence and identity of Europe does not bode well for France’s place in the EU, if she were to win.

The French multi-day electoral process is an arduous one, which does soften some of the excitement surrounding it. Unlike the single day Dutch prime-ministerial vote, the election of the president will be a two-day affair, albeit the winner could be chosen in the first round (April 23) if he or she gets more than fifty percent of the vote. If not, a second round (May 7) will ensue with the winner being the one who gets a simple plurality of votes. After this, the French return to the polls once more on the 11th of June to elect the 577 seats in the National Assembly, France’s lower house of parliament. Although leadership of the republic consists of a balance of power similar to that of the United States, the French President and his or her cabinet is subject to parliament and its composition. If the president does not belong to the party with a majority of seats in the National Assembly, he or she will find themselves marginalized. As this is very likely to happen to Le Pen if she were to win the presidency, her role in the agenda of the legislature will be somewhat weakened. Nevertheless, she finds herself in a win-win situation for the right-wing populist movement that she leads in France, regardless as to if she wins or loses the election. If she wins, she will receive control of the extensive duties that belong to France’s executive branch, which include considerable power in the fields of national security and foreign policy. As a result, she will be able to put her protectionist, Euro-skeptic stamp on the region at the helm of one of the largest economies in the region. If she loses, like Wilders, she will have left her mark on another European country that is seriously giving thought to the idea of a “Frexit.” Just as we see in the Netherlands, the wrong kind of populism has become deeply rooted in France and will remain with or without Le Pen in power.

Finally, the Germans will wrap things up in September with their federal election on the 24th. The one deemed the least “up in the air” will see Chancellor Angela Merkel run for a fourth term, but there is a dark horse in this race. The Alternative für Deutschland (Alternative for Germany – AFG) party lead by Frauke Petry is a far right-wing populist, Euro-skeptic, anti-immigration party that beat Merkel’s Christian Democrats in her home state of Mecklenburg-Western Pomerania back in the regional elections of September 2016. It rides on a number of Germans who are angry with Merkel’s welcoming immigration policies and want to seal off the country’s borders while immediately deporting anyone whose application for political asylum is rejected. Despite the chances remaining low, a victory from this party would be the most devastating to the EU, more so than Wilders or Le Pen combined. Bearing this in mind, even a loss for AFG is not exactly a pleasant situation as it is very difficult to know exactly how many Germans support it and how greatly it may expand if Merkel’s immigration policies really do backfire on her in the next six months. Opinion polls place them at 13% of the vote, but if the political world can change in days, anything can happen in the upcoming months, which means it would be foolish to ever count them out.

We should not turn to fear, but must simply be aware that the far-right populist movement is here, and for now, it is here to stay. As in the case of Bush’s War on Terror, it is impossible to beat an opponent that you cannot see. Such is what makes combatting an ideology implicitly impossible. For those across Europe in the anti-establishment camp, nothing can really be deemed a loss in their minds at this point. As we have seen, even coming out on the wrong side of an election is a failure because to them, shaking up the status quo, which they have so thoroughly managed, was the target, and everything else is a bonus. Their progress will be gradual, and they are no more happy than to sit back and watch the political pendulum swing in their favour.

The real anxiety lies with the status quo. The fundamental danger in this situation is that “Europe is theirs to lose.” The EU’s leaders find themselves walking a tightrope upon which the populists will pounce if they happen to slip up. Everyday, the challenge to keep the citizens from being lured into the abyss of the radical right becomes an enormous one. So far, we should be thankful Rutte has denied Wilders the popular vote. There would certainly be greater panic going into the upcoming elections if things had gone the other way. However, Europe’s leaders must be wary of this challenge and willing to confront it at every level along every step of the way. They must remain impassioned by the desire to not let their community falter, so as to ensure that the members and values of the EU remain united and strong. Wilders himself has told them that he is not going anywhere, so they’re just going to have to get used to the background noise.