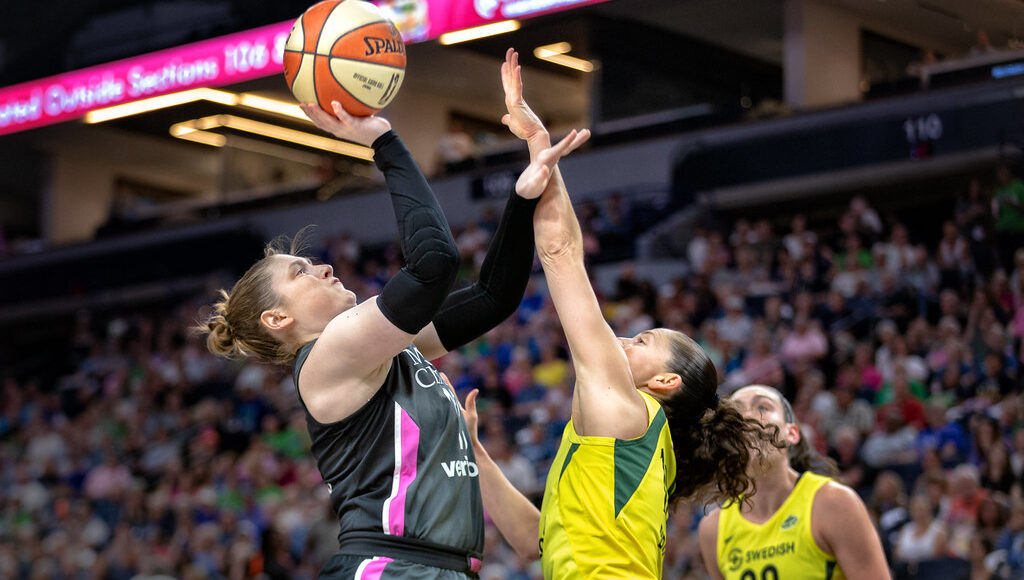 Sports are known for bringing people together. Yet, the degrading comments surrounding the Women’s National Basketball Association (WNBA) Finals and the US Women’s Soccer Team’s (USWNT) fight for equal pay suggest otherwise. Popular remarks deeming WNBA players as unqualified and the USWNT as undeserving of higher pay indicate that society is not nearly as socially progressive as we like to believe.

Permeating into the recent WNBA finals, misogynistic online comments overshadow any celebration surrounding competing teams. The comment section of Bleacher Report, a popular Instagram sports page amassing 16.9 million followers, is littered with disparaging misogynistic remarks degrading the female athletes pictured. Regardless of a post’s context, whether it be highlighting an accomplishment, play, or heartfelt moment, many still see a woman first and a professional athlete second.

Under a photo of two WNBA legends, Diana Taurasi and Sue Bird, exchanging jerseys after what could be their last time playing against each other, Instagram user @igobykam writes, “They forgot to trade bras.” In both the NBA and WNBA, it is common knowledge that exchanging jerseys is meaningful and a sign of respect. Yet, this heartfelt moment is pushed aside, only to be replaced by a demeaning conversation surrounding their sports bras. Gathering over 12,000 likes, this top comment is by no means an outlier. Unfortunately, social media has yet to progress past the go-to comments of “make me a sandwich.”

This sexist outlook has allowed the ‘average Joe’ to believe that they are better than a WNBA player. In a Washington Post article, two-time WNBA champion Devereaux Peters writes about her exhausting daily experience of men underestimating and challenging her abilities: “I have been playing basketball my entire life, and for just as long, I have been challenged by men who think they are better than me.” This level of delusion is common according to a professor of sports media Edward Kian, who told the New York Times, “many of the guys [who] stopped playing at younger ages wrongly believe they are better than high-level female athletes in those sports. You see and hear this in the gym regularly, and it is laughably pathetic.”

Beyond Kian’s observation, a popular reason offered for such a demeaning outlook is the belief that the WNBA is ‘easy’ compared to the NBA. Nevertheless, the two are the same in almost every respect. Both play with the same sized court (28.65 by 15.24 meters), twenty-four-second shot clock, and the same number of quarters. The WNBA differs from the NBA in the weight and size of the basketball (one inch smaller and two ounces lighter), game time (eight minutes less), roster size, number of regular-season games, and gender of the players. Although these differences separate the NBA from the WNBA in certain aspects, they are not significant enough to undermine the level of skill and talent required to play basketball professionally and do not justify the constant widespread disrespect WNBA players receive.

Unfortunately, the WNBA is not the only women’s sport riddled with misogynistic comments. Last year, the USWNT made headlines worldwide for demanding equal pay to their male counterparts. Heading this legal fight, Megan Rapinoe faced media and public vilification that largely failed to criticize her game or the lawsuit, focusing on her looks and sexuality instead. Branding Rapinoe as “a groundlessly bitter, petulant celebrity who is totally ungrateful for the opportunities she’s had,” conservative commentator Brad Polumbo illustrates the common discomfort with strong women possessing “unabashed confidence.” This phenomenon occurs because “to seem too assertive or knowledgeable […] is a turn-off to men […] women are traditionally expected by society to put themselves down and be modest,” according to University of California Berkeley history professor Bonnie Morris.

Many attempt to justify the wage gap by arguing that the men’s soccer team amass considerably more television viewers than the USWNT. Although the USWNT’s game views are four times lower, their pay is still thirteen times less. Last year, the total prize money Fifa offered for the men’s World Cup was USD 400 million, while for this summer’s Women’s World Cup, only a total of $30 million was available. As such, even if salaries were based on viewer count as suggested, the USWNT’s prize money should be notably more than it is now: $100 million, to be precise. Fifa has not publicized how it determines prize money.

Additionally, it would be impossible to determine salary according to revenue generated because the exact revenue generated from the USWNT is unknown. David Neal, the head of Fox Sports’ World Cup coverage, admitted the broadcaster had not assigned a specific value to each tournament. But he conceded that the Women’s World Cup was highly valuable to Fox: “I don’t know how you quantify that,” Neal said. Tatjana Haenni, the former head of women’s soccer at Fifa, stated the organization has never even attempted to figure out the value of the Women’s World Cup. In other words, Fifa interprets the money paid for both the men’s and women’s tournaments as revenue generated by only the men’s event, regardless of whether that is true or not.

This understanding of woman first, athlete second leads to the perpetual undermining and undervaluing of professional female athletes. Check where your own biases and beliefs stem from; this understanding need not be permanent.