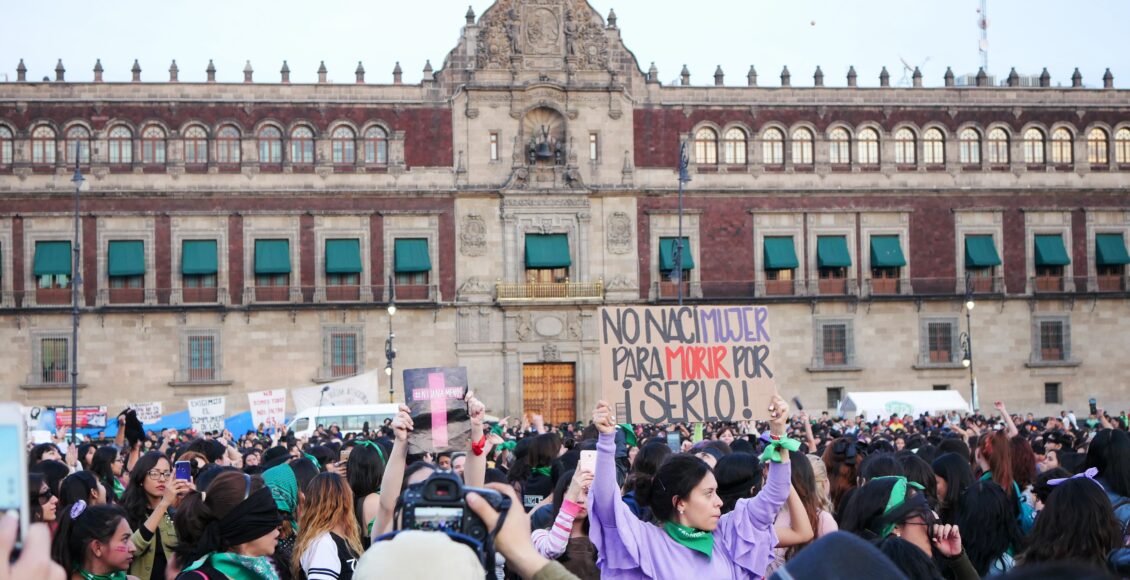 On March 8, 2021, women’s rights activists in Mexico City clashed with the police during a march on International Women’s Day. The protestors were calling on the government to address gender-based violence and femicide, the latter of which claimed the lives of at least 939 Mexican women in 2020. President López Obrador has been accused of ignoring these issues, deflecting them as manipulative criticisms.

The frustration of women’s rights activists due to the insufficient government response to women’s issues is not a phenomenon unique to Mexico. Despite a few exceptions, 2021 to date has been a year of legislative backlash to women’s rights, repealing many of the hard-won successes achieved in recent years. Protective measures against gender-based violence and women’s reproductive rights are being attacked around the world, feeding into a broader international backlash to women’s rights over the last decade.

The “shadow pandemic” of domestic and gender-based violence

Despite increasing rates of femicide and domestic violence in Turkey, President Erdogan has removed a key instrument for combating the problem. On March 20, Erdogan announced that he was annulling Turkey’s ratification of the Istanbul Convention, a Council of Europe human rights treaty that combats violence against women and domestic violence. Women have rallied on the streets in protest, seeing the repeal as a direct attack on women’s rights at a time marked by high levels of gendered violence. Domestic violence has increased substantially in Turkey over the last 10 years, with at least 300 women murdered in 2020, most by their partners.

Erdogan’s spokesperson claimed that the Convention’s initial intent to promote women’s rights has been overtaken by people trying to “normalize homosexuality” — this reasoning is an attack on the LGBTQ+ community as well as women. Erdogan has repeatedly expressed his views on women, insisting they cannot be equal to men and limiting their role to motherhood; a perspective based on his traditional view of family that Turkish women criticize for designating them as second-class citizens.

While activists, lawyers, and opposition politicians have questioned the legality of Erdogan’s decree, democratic backsliding and increasing authoritarianism in Turkey make it easier to threaten policies and legal frameworks that promote gender equality. Pulling out of the Istanbul Convention poses a grave threat to Turkish women and sends a dangerous message to the world about women’s rights.

Erdogan’s decision comes amidst a global increase in domestic violence during COVID-19. President Biden condemned Turkey for withdrawing from the Istanbul Convention just days after the United States Congress passed the Violence Against Women Reauthorization Act of 2021 (VAWA). Biden has referred to passing VAWA as his “proudest” legislative accomplishment from his time in the Senate. VAWA’s reauthorization improves protection and prevention efforts, particularly for Native American women and those from underserved communities.

Despite these advances, Biden recognizes the work still to come and the urgency of the crisis, describing recent intimate partner violence as a “pandemic within a pandemic.” Gender-based violence has often been described as a pandemic in its own right, affecting one in three women in their lifetime, but it’s often not treated as the dangerous and prevalent issue that it is. In his statement on the reauthorization, Biden declared that violence against women should not be a partisan issue; “it’s about standing up against the abuse of power and preventing violence.”

The attack on women’s reproductive rights

While Biden appears to be upholding women’s rights at the federal level, state legislation in the US tells a different story. Arkansas recently passed a law banning nearly all abortions in the state. This law has no exceptions for cases of rape or incest and only allows abortions to save the mother’s life. Governor Hutchinson has signed several abortion restrictions since taking office in 2015 and explains the legislation’s intent to set the stage for the Supreme Court to overturn Roe v. Wade, which 77 per cent of Americans believe should be upheld.

Arkansas is one of 14 states where legislators have proposed various abortion bans this year. Despite being blatantly unconstitutional, Republican state lawmakers in Arizona have suggested prosecuting women who have abortions and their doctors for homicide. Proposed bans in recent years have become increasingly aggressive, moving beyond restrictions towards banning abortion entirely. Abortion rights advocates explain that extreme bills allow potentially easier passage for less severe laws. Under the political cover of extremism, established anti-abortion campaigns could become more successful, posing dangerous long-term threats to American women’s right to choose.

Backlash to abortion rights is not only occurring in the US. Poland’s near-total abortion ban took effect on January 27, only allowing the procedure in cases of rape, incest or when the mother’s life is threatened. The vast majority of abortions are now banned as they are no longer allowed for severe irreversible foetal abnormalities, which accounted for 98 per cent of Poland’s abortions in 2019. The majority of Poles oppose this ban and there have been mass protests against it since October.

Access to abortion has been declining in Poland since the conservative Law and Justice (PiS) party took power in 2015, increasingly driving women to seek abortions illegally or abroad. The PiS party has strong ties with Poland’s Catholic Church, which exerts direct influence on the state’s reproductive policies. Broad opposition to gender equality has grown under the PiS government. They have defunded women’s rights organizations and redirected funds to conservative NGOs who advocate for anti-abortion and traditional religious values. Active state support of conservative civil society has shifted the balance of power from the women’s rights movement to opponents of gender equality. In addition to dismantling laws like the most recent abortion ban, backsliding of gender equality also occurs through cutting state access to women’s organizations, thus removing the government’s accountability to women’s rights actors.

What is the future of women’s rights movements?

Unlike many other countries in 2021 so far, New Zealand is on the vanguard of women’s rights legislation. In March, New Zealand’s parliament unanimously approved legislation that gives couples who suffer a miscarriage or stillbirth three days of paid leave. This applies to couples who lose a pregnancy at any stage, making it the first law of its kind in the world. Lawmakers have pointed to this as an example for other countries as well as a step towards destigmatizing this painful experience that many women and their partners go through. This law is the latest of many that have promoted women’s rights under Prime Minister Ardern. In 2020, New Zealand decriminalized abortion and passed a bill ensuring pay equity regardless of gender.

New Zealand’s legislation is an exceptionally progressive step for the women’s rights movement, but it is a stark contrast to the international rise in discriminatory gender-based legislation. The recent empowerment of right-wing politicians and conservative civil society in the US, Poland, Turkey and beyond has created opportunities to challenge and discredit gender equality movements. Right-wing policies and rhetoric have the ability to normalize violence against women on a legal as well as behavioural level. While legislative backlash is extremely concerning, it must also be acknowledged that legal protections do not guarantee good practice. Legislation is a crucial part of ensuring women’s rights but it alone is not sufficient, as many countries with adequate laws still have a high prevalence of domestic violence and sexual harassment.

Despite decades of progress, bias against gender equality has increased in several countries. Crucial policies are being overturned and restrictive laws hindering women’s rights are coming to the fore. At a time when the pandemic is reminding us how fragile women’s rights can be, it is crucial to reverse this backlash and ensure that it doesn’t continue. As women’s groups in Turkey have declared, the decades-long struggle cannot be erased in one night.

Featured image of a femicide protest in Mexico City with a sign that reads “I was not born a woman to die for being one” by Thayne Tuason is licensed under CC BY-SA 4.0.