Workers of the World: A Blog About Labour, Not Marx 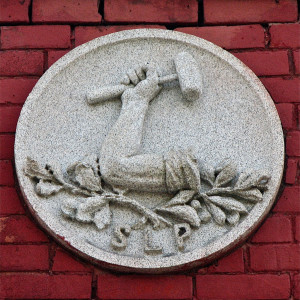 “The proletarians have nothing to lose but their chains. They have a world to win. Workers of the world unite!”

My name is Sam Hersh and I am a U3 student here at McGill studying history and political science. The labour movement has always interested me, seeing it as a positive vehicle for change and social justice throughout history. Growing up as a Montreal suburbanite, I sometimes did not have the chance to gauge with critical issues that might challenge the status quo but during my first two years at university I was exposed to literature that gave me a more thorough take on the issue of labour and gained more critical outlook on the effects capitalism as well as globalization might have on the modern worker here and abroad.

With the ever increasing levels of international trade and encroaching influence of multinational corporations, the advent of globalization has had a lasting effect on countries around the world. As a result of this, we often see mass human rights violations in the workplace from disgracefully low wages to egregious working conditions. With these factors along with the current difficult economic situation, a further rise of the labour movement can be seen in countries where it has prior had very little effect or influence. For some, labour rights and codified labour laws have become a recent phenomenon and the application and enforcement of these laws have become a new challenge for the governments and working peoples of these countries.

The labour movement in countries with older and more developed labour laws also face many challenges today. The proportion of working people who are unionized continues to wane as anti-union sentiment is on the rise. Powerful right-wing forces are attempting not only to weaken the movement but to obliterate it, crusading to lessen their legitimacy, claiming that unions are outdated institutions whose demands for better conditions are not to any country’s betterment. This, along with the erosion of the manufacturing industry in several developed nations, only intensifies the strife facing organized labour as they attempt to regain their historic role as the progressive voice for the working people and as a broader actor in the struggle for social justice.

Workers of the World will focus on the achievements and challenges of the labour movement across the world, looking at the situation and ongoings in different countries or regions and what they might mean for the broader implications of an international labour movement. This will be done by looking at recent news concerning labour from a different region or theme every week and then comparing them through a comparative analysis at the end of the week, while always keeping in mind as mentioned before what this might mean for international solidarity between workers.

WOTW will give readers a new and more diverse view of the labour movement, revealing the injustices facing workers across the globe as well as here in Canada that may have gone unnoticed otherwise, and what is being done to fix them and create a safer, fairer and more equitable workplace for all. I invite you to join the debate and encourage you to comment on my posts as we engage in this critical discussion.