World Trade Organization – Inside the Committee 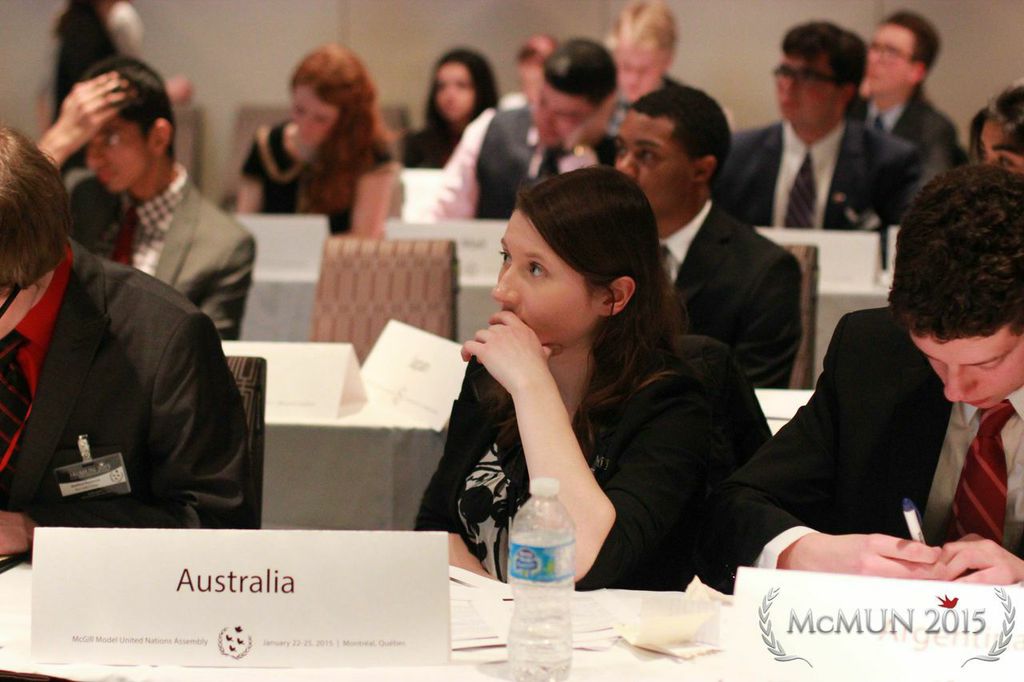 The World Trade Organization (WTO) was originally conceived as the General Agreement on Tariffs and Trade (GATT), but it adopted its current name on January 1st, 1995 in Geneva, Switzerland. The institution’s goal, quite explicit in its name, is to liberalize trade between countries. The WTO is an opportunity for all governments to congregate and negotiate trade agreements.

Throughout the McMUN 2015 committee sessions hosted by McGill University, delegates from across North America gathered to represent and implement trade interests on behalf of various different states. The primary goal was to debate and defend their country’s policies and ultimately reach a consensus with the other states. Two years hypothetically pass between every session, which takes place every day for a few hours.

The first committee session took place in the fictional year, 2003, and the delegates were eager to commence the assembly and see what was in store for them. “I’m so excited to be here [at McMUN], but I’m absolutely terrified of the competition,” said a delegate from Ryerson University. There were about 50 delegates in the conference room who represent Universities from Calgary, Arizona, Massachusetts and even Sherbrooke.

Stadden, a Committee Director from McGill, said he was surprised by how extensively the committee focused on International Trade. He adds, “The delegates have done so much research and really know what they’re talking about.”

During the first committee session, no amendments or resolutions were made. The bulk of the time was spent introducing the delegates and learning about their background.

In contrast, the second and third meetings included more detailed discussions and debates on trade issues. The UK presented the working papers and introduced a resolution named “DRANC”. Mexico proceeded to explain that it was a far-reaching approach focusing on developing technology and development grants. This proposal created a divide in the room due to its disproportional emphasis on the country’s fiscal budget. “The resolution focuses too much on developing nations. We need to figure out exactly what our needs are and then make a concrete attainable timeline,” China said. The Pakistan delegate agreed and added, “A sustainable plan or outline is needed, and figuring out if it’s plausible for the developing countries to allow products into their country.”

The next topic of discussion was proposed by the European Union, France, Switzerland, the United States, Mali and Germany, collectively named the E.A.T. This mandate includes examining agricultural subsides in order to aid developing countries with their agricultural production. Receiving support from NGOs would further accelerate the process. The idea seemed reasonable to most delegates, but some delegates were concerned that the E.A.T was punishing the developed countries for being successful at producing agricultural goods. Mexico reiterated this point and noted, “The idea is great, but it focuses on technology transfers to help ‘the little guys’”. In addition, France stated that the motion offers nothing to developed countries.

In the fourth committee session, the delegates were hoping to come to an agreement on policies that would benefit all countries. Key issues that were discussed include trade in textiles, trade in services and investment-related trade measures, agricultural subsidies, non-tariff barriers and most importantly, the implementation of the Trade-Related Aspects of Intellectual Property agreement.

The atmosphere in the room was extremely positive. Delegates were engaged and respectful of one another. As a Committee Director, Mathilde thoroughly enjoyed her participation in SSUNS in the fall, she decided to get involved with McMUN. “I love how much you think you know about the WTO before starting the conference and realizing how much you still have to learn as a result,” She exclaimed, “It’s a great way to understand how the organization really works, in a fun way!”