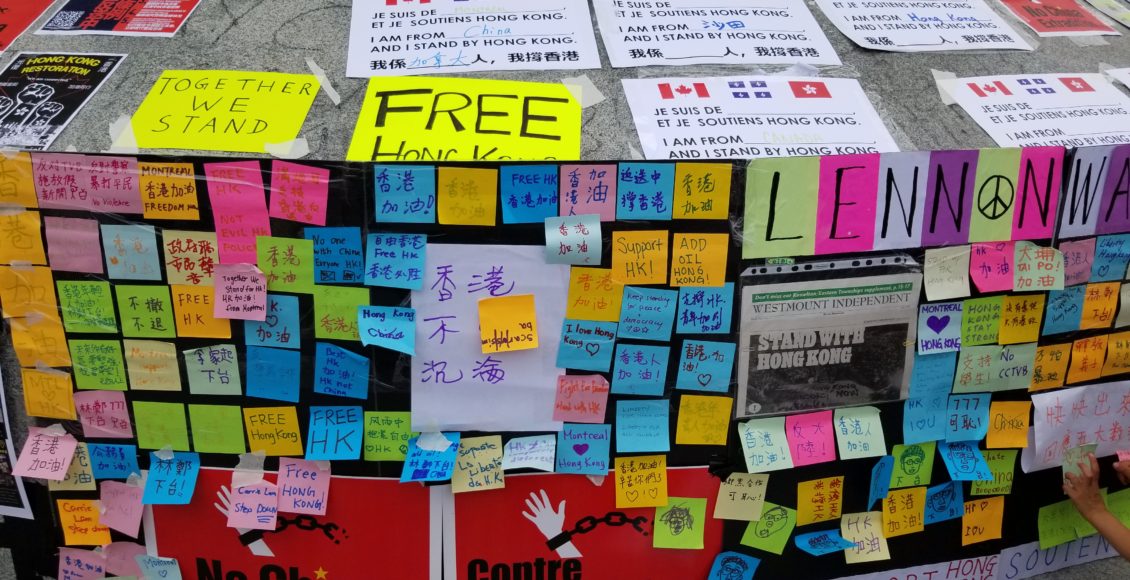 In early August of this year, Action Free Hong Kong Montreal, a pro-democracy group advocating for Hong Kong autonomy, prepared to rally alongside the LGBTQ+ community at the annual Fierté Montréal Parade. The festival’s organizers had confirmed the group’s participation, only to revoke their spot shortly after. On the eve of the march, August 17th, a board member from Fierté Montréal, Karl Boulanger, had notified the group of their removal via email according to an open letter penned by Action Free HK MTL. To the group’s disappointment, their plans to join the festival as members and allies of the LGBTQ+ community were thwarted over issues of security.

Concerns about potential counter protests by pro-China supporters were expressed by Fierté Montréal’s vice-president, Jean-Sébastien Boudreault, who confirmed at least ten threats to “sabotage” the parade by those against the Hong Kong group’s involvement. According to the email received by Action Free HK MTL, these threats prompted police authorities to recommend that the festival withdraw the group’s participation. However, such a recommendation was later denied by a spokesperson of the SPVM, Montreal’s local police force.

According to screenshots provided by an informant to Action Free HK MTL, schemes to counter their presence at the parade were arranged in a WeChat group of over 500 members. WeChat, a messaging and social networking app particularly popular amongst the Chinese community, was used to discuss the ways in which the Hong Kong group could be opposed. The MIR received screenshots of this chat from Action Free HK MTL, which revealed plans to fill water pistols with pepper water, while others in the chat suggested that they rush towards the group mid-parade. Another message announced one member’s intent to confront Action Free HK MTL while in possession of a steel whip.

Upon having their parade participation revoked, Action Free HK MTL raised concerns regarding the implications of “removing bullied participants” from Fierté Montréal’s events, which would “only encourage more threats to [its] future activities”. Amongst some of the group members looking forward to marching in the parade was Henry Lam, a former Hong Kong resident who had relocated to Canada eight years ago to marry his husband, Guy Ho. Fierté Montéal’s response, according to Lam, failed to uphold the organization’s commitment to widespread inclusivity. In addition, organizers were criticized by David Mulroney, a former Canadian ambassador to China, as displaying a lack of support against pro-China efforts to bully and shut down discussion on an important human rights issue.

Fierté Montréal defended its decision by emphasizing both the primacy of safety and its policy of non-interference in geopolitical matters. On a day centered entirely on gender and sexual inclusivity, Boudreault worried that a potential face-off  over the Hong Kong dispute would overshadow their ultimate mission of defending the rights of LGBTQ+ communities. In explaining the decisions made by Fierté Montréal organizers, Boudreault had stated, “we didn’t want to take the spotlight from LGBT groups for a subject that isn’t LGBT, even though it’s an important subject”.

On the day of the parade, August 18th, Action Free HK MTL nevertheless expressed their solidarity with the LGBTQ+ community by holding their own demonstration in a park near Atwater Market. Meanwhile, pro-China supporters were seen walking alongside Fierté Montréal’s parade route singing the Chinese national anthem with Chinese flags in tow.

Clashes between the two groups continue to be seen within cities across Canada. As protests in Hong Kong against China’s extradition bill continue into their sixteenth week, there is similarly little sign of backing down amongst Hong Kongers living in Canada. Pro-China and pro-Hong Kong supporters notably confronted each other in demonstrations in Halifax and Vancouver. Another face-off between the two groups in Toronto prompted the arrival of police in an effort to maintain the peace and separate the opposing demonstrators.

Yet, what is clearly more difficult to separate is the presence of pro-democracy Hong Kong groups from their other political agendas. This was self-evident in the denial of Action Free HK MTL’s participation in the Fierté Montréal parade, due in part to the organization’s reluctance to interfere in divisive political issues. Although Action Free HK MTL insisted that they would comply with this policy, maintaining a non-partisan approach is easier said than done. Individuals like Henry Lam demonstrate the complexity in trying to compartmentalize contentious issues. Lam is both a pro-democracy Hong Konger and a member of the LGBTQ+ community – these identities cannot be separated.

Both Action Free HK MTL and Fierté Montréal’s missions are intrinsically political in their respective efforts to defend human rights. The question at hand lies in the ability, and in the efficacy, of keeping their activities separate. Should a parade promoting the rights of the LGBTQ+ community have the responsibility to advocate for all the geopolitical issues experienced by its members? Should all pro-democracy protests henceforth rally for sexual and gender diversity? Does combining these issues help better promote each one, or does it risk having one overshadowed by the other? In a world of diverse identities and overlapping objectives, groups may either strengthen their alliances or compete for so-called “political space”. In the attempt to have their voices heard, the rallying of one mission in the domain of another becomes an issue not only of time and place, but, in the political arena, one of relevance and space.

Editor’s Note:  An earlier version of this article stated that Éric Pineault had informed Action Free HK MTL of Fierté Montréal’s decision to pull the group from the parade and incorrectly stylized Action Free HK MTL’s name as “Free HK MTL.” Both misprints have been rectified.