Can Chrystia Freeland Save the Liberals? 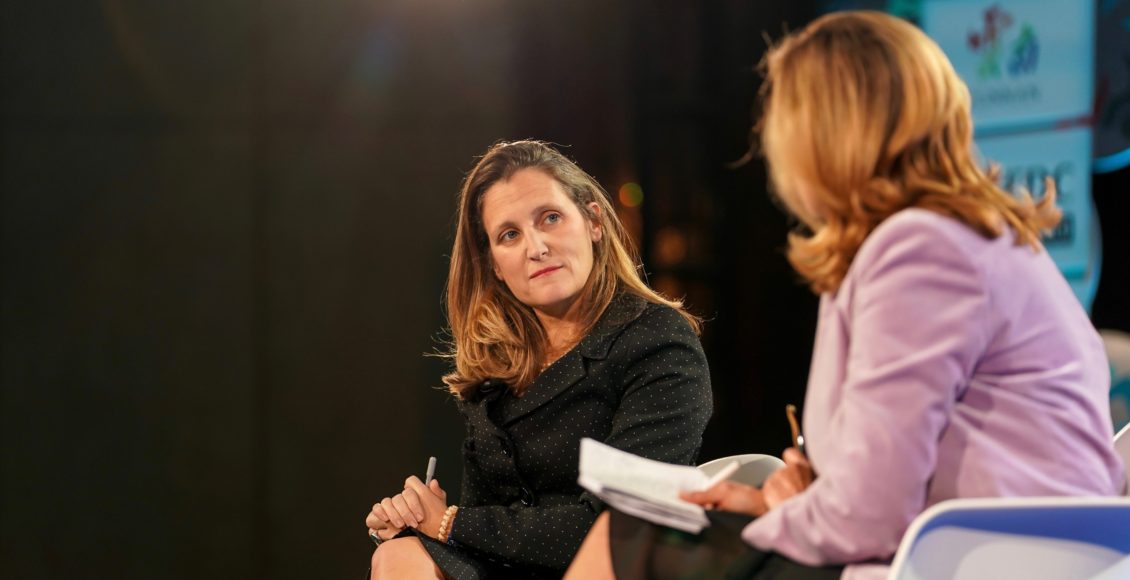 Chrystia Freeland speaking about the NAFTA negotiations at the Fortune Global Forum in 2018.
Share

Earlier this month, Justin Trudeau unveiled a new cabinet of ministers with whom he will begin his second term as Prime Minister. Of the many changes he made to his previous cabinet, naming Chrystia Freeland Minister of Intergovernmental affairs, in addition to granting her the role of Deputy Prime Minister, may very well be his most consequential decision.

Freeland, who was previously at the head of the coveted Foreign Affairs portfolio, seems to be Trudeau’s best bet at appeasing growing internal tensions within the country. During her time as Minister of Foreign Affairs, she effectively reasserted Canada’s relevance on the international scene. Her main challenge, renegotiating the North American Free Trade Agreement with the Trump administration, demonstrated her strong problem-solving skills. Due to her action on this and other consequential files, most politicians see her as someone who can get things done—a rare quality in Ottawa.

Going into his second term, Trudeau needs a problem-solver on the domestic front. Internal tensions, namely between the Prairies and the federal government, will be one of the main concerns he will need to grapple with in the coming years. The current political climate clearly shows the need to act quickly and find compromises on key issues. Jason Kenney and Scott Moe, Alberta and Saskatchewan’s respective premiers, will undoubtedly fight back against a number of Liberal policies. As minister of intergovernmental affairs, Freeland will be the one in charge of dealing with hostile provincial governments.

Trudeau’s decision to make Chrystia Freeland his intergovernmental affairs minister is a strategic move. Her ability to negotiate effectively and to listen to other parties involved while standing her ground will inevitably prove useful when trying to move the Liberal agenda past Conservative provincial officials. Although she has received some criticism from other lawmakers, she has also been praised by many and is respected by an overwhelming majority of people within Canada’s political playing field. Another relevant fact is that she has always rallied behind Trudeau’s leadership, and she is known to be one of his greatest allies—and friends—on the Hill. Freeland is perhaps the only person Trudeau trusts enough to undertake the hefty task of unifying a deeply divided Canada while advancing the Liberal agenda.

Freeland’s political skills make her an obvious choice for the role, but her roots might also play in her favour. She was born in Peace River, a small town almost 500 kilometres north of Edmonton, making her the only Alberta-born member of Trudeau’s cabinet. Raised on a farm, which is still owned by her family, Freeland has attempted to identify with the people of rural Western Canada. Speaking at the Triennial Congress of Ukrainian Canadians in Ottawa, she told the crowd that she is “originally a proud Albertan,” even though she now represents a University-Rosedale, a downtown Toronto riding.

Playing this card might be a dangerous game though, seeing as she has not lived in the province for decades. A Harvard graduate and Rhodes scholar, Freeland seems to have more in common with Canada’s political elite than her hometown neighbours. By appointing Freeland, Trudeau might be extending an olive branch towards the Prairies, but Albertans will likely see this as another failure to recognize the need for true Western representation in Liberal circles.

In addition to taking on the intergovernmental affairs portfolio, Freeland will also be acting as Deputy Prime Minister, a role that had been vacant since 2006. This position, which comes with no prescribed duties or tasks, has historically been treated as an honorary title. Each prime minister is free to design the role as he pleases, meaning responsibilities can range from the substantive to the ceremonial. Although he hasn’t released an official list of duties yet, Trudeau has publicly stated that he wants Freeland to act as his right hand in dealing with “issues that matter right across the country, like energy and the environment and other large issues.”

Filling these roles simultaneously seems like a substantial responsibility, and it certainly is. While Freeland has a history of successfully tackling whatever problem she is faced with, this portfolio will bring on new challenges. National unity has been a contentious issue for decades and there remains no clear path for resolving East-West tensions. Given these circumstances, there is a real possibility that Freeland will fail to meet the sky-high expectations set by the media, which now largely refers to Freeland as the Liberal party’s saviour. If such a scenario plays out, her reputation will take a hit, dampening her political future.

The grim prospect that Freeland was put in this position as a ‘sacrificial lamb’ is one we have to consider. Historically, women in Canadian politics have rarely been granted high-power positions without being burdened by unsolvable issues.

Perhaps the most telling example of this is Kim Campbell. She was elected as party leader when Brian Mulroney retired from politics in 1993. Mulroney saw the writing on the wall and knew the Progressive Conservatives would be crushed in the upcoming election. When Campbell took office, 132 days before election day, her party was doomed to fail. When the Progressive Conservatives inevitably endured a crushing defeat, she lost her seat and retired from politics.

While it is possible that Trudeau chose to hand over such large responsibilities to Freeland because he truly believes that she has the capacity to save the Liberals, this might not be the case. Knowing very well that Western alienation is growing, he might sense that all attempts at restoring national unity will inevitably result in failure, at least in the short-term. If this occurs, passing the blame on to Freeland might help alleviate backlash against him.

Gendered discrimination still exists towards women in Canadian politics, a sphere in which they tend to be scrutinized more easily than their male counterparts. Considering this reality, backlash against Freeland, if she fails to restore national unity, might curb her political trajectory. Given her near-perfect record, her extensive network and the amount of political clout she has amassed over the years, Freeland stands out as a serious contender for Liberal leadership. In this light, tarnishing her record might be beneficial to Trudeau if he wishes to hold on to power.

Only time will tell what Chrystia Freeland makes of her new position within the Liberal government. Although she will face tremendous challenges, she is arguably the best person to overcome them. If she does manage to soften internal tensions and ensures the government runs smoothly, Freeland has a chance at consolidating liberal support across the country. Needless to say, how she navigates these new responsibilities will play an instrumental role in determining her political future; based on her past accomplishments, she may come out stronger.