Checking In on the Magnificent Seven

An analysis of the three main takeaways of the G7 Summit 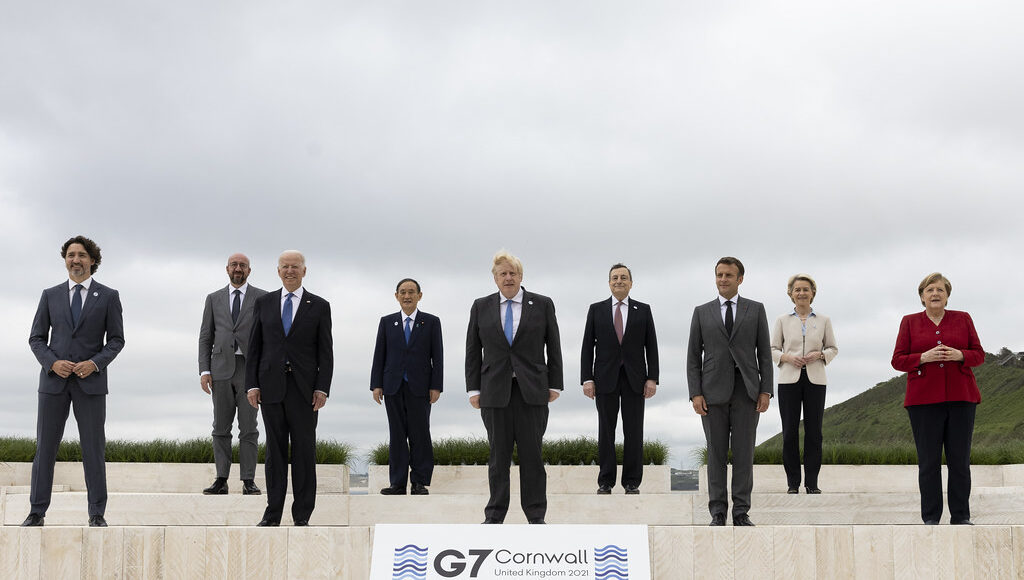 From June 11-13, 2021, the United Kingdom hosted the 47th Group of Seven (G7) summit in Carbis Bay, Cornwall. The annual political forum is an opportunity for Canada, France, Germany, Italy, Japan, the UK, the USA, and the European Union to convene and discuss critical global issues. Initially created in response to the 1973 oil crisis, the summit has become a space for the Group of Seven to deliberate matters as diverse as the global tax system, infrastructure projects, and climate change.

This year’s G7 summit marked US President Joe Biden’s first trip to Europe since taking office. Following the G7 forum, Biden attended the NATO and EU-US summits before meeting with Russian President Vladimir Putin in Switzerland, emphasizing the need for American leadership on the global stage. Biden’s election win in November 2020 was expected to revitalize the American enthusiasm for multilateralism, which President Donald Trump abandoned, and this enthusiasm was on full display in Cornwall.

This year, UK Prime Minister Boris Johnson invited delegates from Australia, India, South Korea and South Africa, along with the traditional G7 members, to attend the first global summit held in person since the COVID-19 pandemic. With the increasingly globalized nature of the world, inter-state collaboration has become more important than ever for addressing international issues. The top policy priorities on this year’s agenda included: the financial regulation of multinational enterprises, the promotion of the G7’s shared democratic values against China, the reduction of global emissions through the transition away from coal.

The G7 delegations reached a consensus on an ambitious global minimum tax of 15 percent at the summit. This tax plan would create a fairer tax system by preventing extensive tax avoidance while generating $150 billion in global tax revenues per year. While it reached a consensus, the G7’s informal nature means that the commitments made by its members’ leaders are not legally binding. For the commitment to effectively impact the global tax system, the deal will have to be approved by the G20 delegates in October.

Despite its limitations, this deal is making progress: 130 countries signed the Organization for Economic Co-operation and Development (OECD) tax agreement in Paris on July 1st, 2021. Ireland – one of nine states to opt-out of the deal – would be negatively impacted by a minimum corporate tax. It would increase its corporate tax by 2.5 percent, thus reducing its current appeal as a tax haven. Ireland shares this dissenting opinion with Hungary and Estonia, which puts the EU in a difficult position since it would not amend its tax policy without unanimous support from its members.

If Ireland were to support the agreement, major companies based on the island like Facebook, Google, and Apple could potentially choose to relocate to countries with lower tax rates where they could make greater profits. Even if the G7 members do not implement a fairer tax system immediately, their commitment to creating a global minimum tax marks an end to the perpetual deregulation of the private sector.

In Carbis Bay, the G7 leaders launched the Build Back Better World (B3W) partnership to counter China’s Belt and Road Initiative (BRI). Led by US President Joe Biden, the partnership is designed to compete with the massive Chinese infrastructure project often referred to as a modern Silk Road. Announced in 2013 by Xi Jinping, the Belt and Road Initiative aims to connect over sixty countries across three continents through colossal infrastructure, medical, and digital foreign investments.

The BRI poses a challenge to the United States’ interests. For example, China has built Africa’s biggest port in Djibouti at the entrance of the Red Sea and the Suez Canal, the passing point of 12 percent of the world’s trade volume. Additionally, the initiative lacks transparency and sustainability and favours debt-trap diplomacy, a practice which gives China leverage over borrowing countries.

To rival the BRI, the G7 leaders introduced the Build Back Better World partnership as a more ecologically- and financially friendly alternative to China’s project. Biden is pushing for the B3W to be a value-driven partnership that meets the infrastructure needs of low- and middle-income countries while protecting the working conditions across the globe. However, the B3W currently lacks structure, clarity, and funding, especially considering the extent to which the COVID-19 recession increased the G7 nations’ debt.

In line with the sustainable B3W project, the G7 members officially supported a green revolution by renewing their commitment to limit the rise in global temperatures to 1.5°C. The leaders also reaffirmed a lost pledge taken at the COP15 in 2009, which promises a donation of $100 billion per year to developing countries to cut carbon emissions. Despite these seemingly strong targets, one policy expert deemed the summit a “colossal failure.”

While G7 leaders agreed to stop all overseas funding of coal projects, they failed to set an end date for the transition away from coal. Japan’s heavy reliance on coal compounds the challenge of a G7 shift toward clean energy. Since the Fukushima nuclear disaster in 2011, most Japanese reactors are still inoperative, which increases the country’s dependency on coal compared to other developed countries and its G7 allies.

In November, Japan will once again face pressure from its allies at the COP26. The climate change conference in Glasgow will be a renewed opportunity for the G7 nations to cooperate with 190 countries on ecological matters and gain the trust and approval of environmental NGOs.

The ability of the G7 nations to develop a unified agenda is crucial as we move toward the 16th G20 summit, set to be hosted by Italy in October. While the G7 member states made some progress in Cornwall, the latest summit demonstrates the difficulty of finding effective, broadly agreeable solutions to global issues. Additionally, the commitments made by G7 leaders in Carbis Bay will only be meaningful if they are accepted and followed by the G20 nations, which account for more than 80 percent of global GDP. Undoubtedly, the seven nations are only magnificent if the rest of the world supports them.