CSocD 58: Expectations and Realities of Diplomacy in Practice 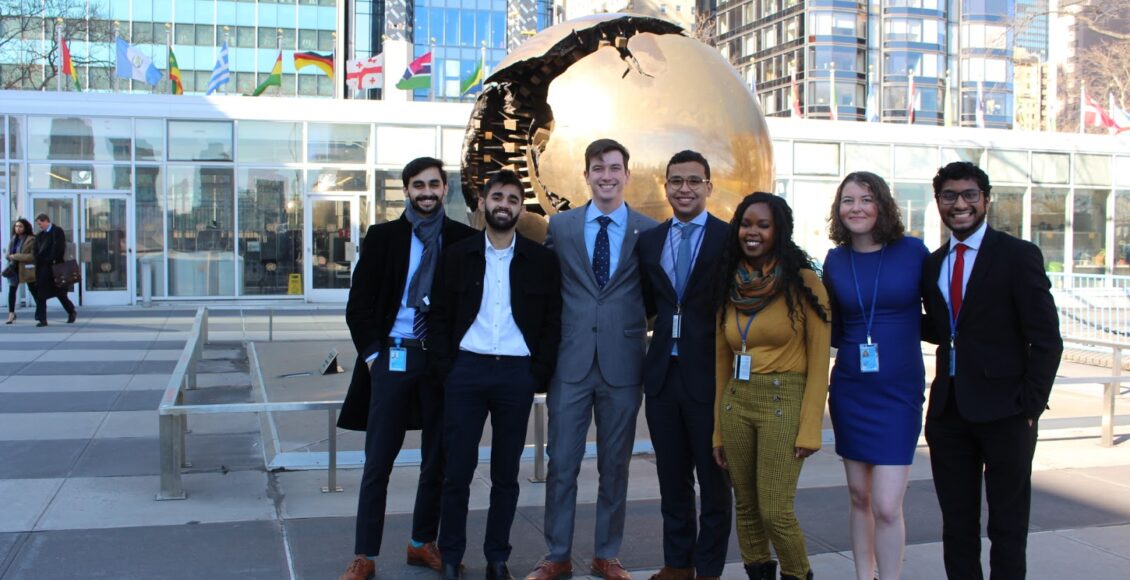 IRSAM’s delegation to the 58th CSocD on the grounds of the UN Headquarters in New York. Photo courtesy of author.
Share

Editor’s note: This is the first part of a two-part series on the International Relations Students’ Association of McGill (IRSAM)’s visit to the United Nations 58th Session of the Commission for Social Development (CSocD 58). Part II may be found here.

From February 10th-19th 2020, the United Nations hosted the 58th Commission for Social Development (CSocD 58) in New York City. Hundreds of foreign representatives and civil society alike flocked to the Commission to engage with this year’s priority theme, “Affordable housing and social protection systems for all to address homelessness.”

IRSAM and the Commission for Social Development

Each year, due to its special consultative status with the Economic and Social Council of the United Nations (ECOSOC), the International Relations Students’ Association of McGill (IRSAM) sends a handful of delegates to CSocD in order to contribute a diverse group of youth voices to the dialogue. In addition to viewing the debate over the resolutions, the delegation also attends side-events hosted by academics and topic specialists, as well as arranges meetings with Permanent Missions to discuss the conference topic. This year was also the first year IRSAM hosted its own side-event, in partnership with MIT’s Media Lab, on defining the concept of informality within the context of informal housing.

For context, CSocD is just one of eight “functional commissions” of ECOSOC, which itself is a UN organ (one of the UN’s six) aimed at fostering social, economic, and political sustainable development. The commissions generally have one large annual conference, complemented by various informals, and expert-level discussions in the months prior. During the conference, diplomats work to finalize all last-minute details and proposals to “draft resolutions”. CSocD resolutions in the last decade have focused on youth policies and programmes, the Madrid International Plan of Aging, the New Partnership for Africa’s Development (NEPAD), and/or the conference theme. This year’s session addressed such themes within the context of three resolutions.

One of the most significant takeaways for me pertained to how diplomacy is conducted in practice.

Firstly, it was interesting to see how national priorities translated in little ways during the Commission. For example, due to their opposition to promoting abortion rights abroad, the U.S. decided to hold a vote on a paragraph in the NEPAD resolution that they voted in favour of just the year before. Among other items, this paragraph briefly referenced the Maputo Plan of Action 2016-2030, which is a “robust policy commitment by African leaders that aims to guarantee women’s universal access to sexual and reproductive health and rights.”

The commissions typically operate and approve whole resolutions on a consensus basis—to show a united front—and so any call for a vote is quite rare and unfortunate. Delegations lamented the need for a vote, including allies like the EU (begins 16:59). In the end, the U.S. was the only “no” vote on the paragraph, with Israel abstaining (20:18). In justifying its “no” vote, the U.S. said it supported the MPoA broadly speaking, but could not support its specific references to promoting abortion access (begins 24:58).

Another instance in which this became apparent was during one of the side-events hosted during the conference, “Family-friendly policies and the future of work – measures to support family”, hosted by the right-leaning governments of the U.S., Brazil, Hungary, and Poland. The U.S. speaker was Valerie Huber, now the Special Representative for Global Women’s Health in the U.S. Health and Human Services (HHS) Department. Huber has had a long history of promoting abstinence-only programs, and used her time to speak about the “sanctity of life”. Her recent promotions in the HHS, and her presence at the event, was just one further reflection of the Trump Administration’s focus on building international support to restrict abortion and promote “traditional family values”.

Secondly, we learned that the bulk of the work is already completed prior to the conference. Resolution sponsors will host informals and consultations with the aim of achieving consensus. At the same time, regional groups will work on a statement to deliver at the commission, which has to be agreed upon by all its members. These regional group statements are to demonstrate regional solidarity and add emphasis on region-specific issues that need to be addressed. At CSocD 58, for example, among other topics, ASEAN touched on concrete actions to transition from the informal economy and the use of information and communications technology (ICT) to create smart, sustainable cities.

Thirdly, the exact language in the resolution is of the utmost importance, down to the last word. Delegations can spend hours arguing over which word or phrasing to use, emphasizing how seriously these resolutions are taken. In doing so, some delegations are trying to push the envelope as to what can be agreed upon collectively, whereas others do not want to include certain phrases or words that could be construed as going against their national foreign policy in any shape. As such, one common buzzword is “agreed language”; often resolutions will be extremely similar to the years prior, with occasional deviations. If delegations disagree with changes, they will merely say “let us stick with the agreed language, and not break consensus on this issue.” While no UN General Assembly resolution is technically legally binding, at the very least, UNGA resolutions fall in the category of soft law, in terms of sources of international law.

At CSocD, for example, the implied definitions of two particular words were met with large debate; “family”, and “homelessness”. While we were not privy to the informal resolution discussions, these two debates were reiterated by nearly all the Permanent Missions we met with while in New York. For “family” (as in the phrases “family homelessness” or “family-oriented policies”), does this refer to the nuclear family, or something more? For the word “homelessness” in the resolution, should this also refer to people who technically have homes, but are woefully inadequate?

Fourthly, and as implied by the above, nations will push surprisingly hard for their positions, at every level, sometimes to ridiculous degrees. The clearest example of this is when nations could not agree on the priority theme for the following CSocD. The African Group and Colombia were heavily focused on technology and sustainability. The Russians wanted to focus on well-being. The EU believed the theme should focus on “leaving no one behind during transitions”. In the end, the Chair aggregated all the proposals into what is now the convoluted name for next year’s theme: “Socially just transitions towards sustainable development: The role of digital technologies on social development and well-being for all”. The theme of maintaining the concept of “consensus” at all costs is therefore one of continued importance for the Commission.