Earth Week is for Activists 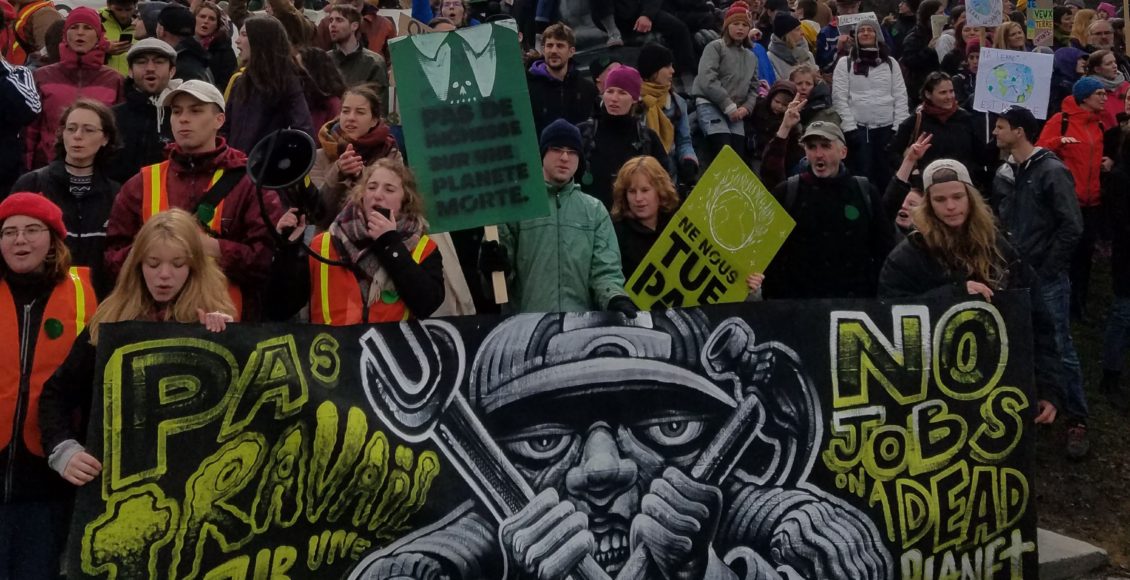 On April 27th the group “La planete s’invite au Parlement” (the Planet Goes to Parliament), an environmental advocacy coalition, held a rally for Earth Week in downtown Montreal. Known for its engagement of the youth, the organization consistently advocates for political action on climate change.

The movement has gained fervor, as evidenced by the increasing number of march attendees. In November 2018, its first march attracted an estimated 50,000 marchers in downtown Montreal’s Place des Arts. The following March garnered an estimated 150,000 marchers of all ages. Along with marches, the group engages in workplace and student strikes, meetings with politicians such as Québec Premier, François Legault, and taking part in organizing worldwide climate movements such as the Global Climate Strike for the Future.

In April, police closed off major throughways like Parc Avenue to accommodate the mass of an estimated 10,000 activists carrying signs and megaphones. Marchers represented every age group, from primary schoolers to grandparents. One cannot underestimate the importance of shutting down such busy streets, as it forces everyone in the surrounding areas to take notice of the movement. From that, the hope is the coalition will be able to attract attention, start discussions, and gain more participation in climate movements.

Locals stood in their windows watching and listening to marchers chanting below. People’s daily tasks were interrupted as buses were re-routed and cars on the street were stuck amongst weaving marchers. One could hear the din of the drum corps for several blocks, intriguing curious passersby across the city. People lined the sidewalks taking videos, while protesters moved forward towards their final destination: Monument George-Etienne Cartier.

Once there, people spilled onto the steps of the monument, creating a human barrier of different groups holding large banners. Some students climbed on top of the two copper lions facing the street, displaying their hand-made signs.

Several speakers stepped up to the microphone at the center of the steps to share messages of unity, action, non-violence, and promises of change for future generations. A group of youth spoke in both French and English about politicians not doing enough to address climate change. More specifically, they explained that so far, leaders failed to take adequate action to uphold promises made in the 2015 COP21 Paris Climate Agreement to prevent warming above two degrees Celsius. After this point, or even sooner, the negative impacts of climate change will be irreversible.

In fact, it is the youth who are taking environmental engagement to the next level. In Montreal, advocacy groups such as “Pour le Futur Montreal” or “For the Future Montreal” lead student walk-outs. As of May 17th, students had rallied every Friday for fourteen weeks straight, skipping school to protest in downtown Montreal. The teens even staged a sit-in, physically blocking the entrance in front of Francois Legault’s office on McGill College Avenue, to show their commitment to fighting for climate justice.  Many involved argue that activism is a necessity to promote climate action, particularly for those who are omitted from political engagement such as those below the voting age.

Moreover, the future costs associated with climate change will unquestionably fall upon today’s young generations. It is estimated that climate change will reduce major economies’ GDP, like the US, by upwards of ten percent due to “damage [to] critical infrastructure and property, labor productivity, and the vitality of our communities”. Entire industries, such as tourism and realty, will be forced to evolve to keep up with geological changes, such as sea level rises.

Changes in climate and impacts on infrastructure will not only produce negative economic costs, but they will also affect our health. For example, increases in temperature and changes to the natural environment, like excessive rainfall, will produce more insects like mosquitoes that thrive in tropical conditions. Therefore, there will be an increase in the incidence of diseases they carry like the Zika virus. The burden of disease will hit vulnerable populations such as “older adults, children, low-income communities, and some communities of color” that are less resilient to disease due to age or lack of access to medical services and sanitary conditions, whether it be financially or geographically.

Not only will environmental events affect the health of particular members of society, but they will also impact all aspects of everyone’s quality of life. The UN reports climate change will greatly exacerbate multi-dimensional inequality – not only income, but also access to public services, health care, quality housing, education, good jobs, and everything else necessary to live with dignity. It is predicted that these sweeping effects will produce a mass displacement of 200 million migrants by 2050, nearly quadruple the number of people currently displaced by conflict or persecution, according to the UNHCR. Thus, vulnerable communities will not only inhabit locations at the forefront of climate disasters, but they will also lose a disproportionate amount of assets and income than their wealthier counterparts.

For example, indigenous communities worldwide are at risk of a complete loss of livelihood due to the effects of climate change. Not only is the physical environment changing, threatening generations of different groups’ ways of life, but the risks of climate change also “exacerbat[e] the difficulties already faced by indigenous communities including political and economic marginalization, loss of land and resources, human rights violations, discrimination, and unemployment”.

Confrontation regarding loss of land and energy persist in British Colombia, where Trudeau’s administration has yet to decide whether or not to move forward with the Trans-mountain petroleum pipeline, which would traverse traditional indigenous lands such as the Secwepemc First Nation. At a fundraiser in Vancouver where Prime Minister Trudeau was speaking, an advocate against the pipeline, Will George of the Tsleil-Waututh Nation, spoke out. He explained that the pipeline posed too great of a threat to local water sources. However, the Prime Minister responded that the Canadian government was committed to working with indigenous groups during the project, some of which were actually proponents of the pipeline under certain conditions. Indeed, disagreement regarding the environment persists within and across communities.

At the April 27th climate march in Montreal, indigenous activists stressed the necessity of partnership between the Canadian government and indigenous communities to fight climate change, particularly those local to the Montreal territory such as the Mohawk or Kanien’kehà:ka, Saint Lawrence Iriquoians, Huran-Wendat, and Haudenosaunee nations. They explained that these communities are not agent-less victims but are resources from which the government could learn better environmental management. The speaker reaffirmed that there is an opportunity to tap the deep-rooted knowledge of the land and environment maintained for generations of indigenous history rather than pre-historic petroleum wells.

These movements are already having a positive, concrete effect. After the outrage following the publication of the Québec budget plan, which climate activists argued did not go far enough to combat energy consumption, the government committed to reducing the province’s dependence on petroleum by 40% by 2030 — the minimum amount necessary to prevent irreversible increases in global temperatures above 1.5° Celsius, according to the Intergovernmental Panel on Climate Change Report. While it remains to be seen just how far the government will be willing to move forward on green legislation, activism on this scale reveals that if politicians have any hope for re-election, they will be forced by their electorate to prioritize the environment.