From McGill to the Ministry of Justice: Interview with David Lametti, Minister of Justice of Canada 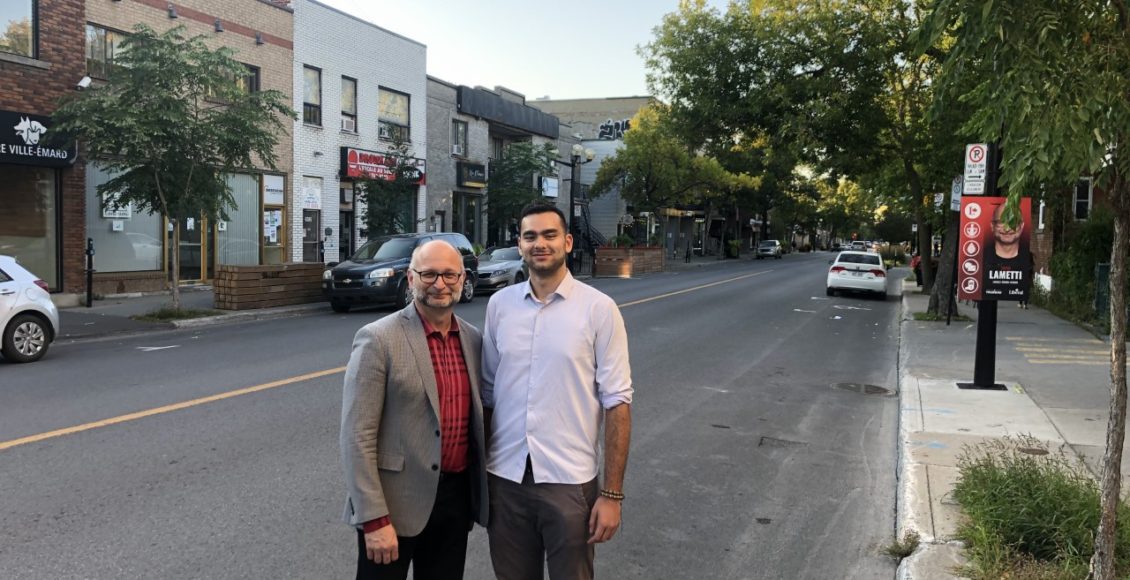 It’s a beautiful Monday afternoon; the sun shines down on  the Lachine Canal as I hurriedly speed through on my bike. Despite no welcome sign announcing it, crossing l’Église Street takes me past the Ville-Marie-Le Sud-Ouest-Île-des-Sœurs federal riding. Narrowly avoiding a large crowd of baby strollers and afternoon joggers, I make my way to the Lasalle-Émard-Verdun riding. Suddenly, street lights are decorated by the friendly face of the Minister of Justice, David Lametti, smiling back at me.  Minister Lametti is currently seeking re-election in his riding. My harrowing experience dodging pedestrians on the canal ends right at the front steps of his elections headquarters on Monk Boulevard. The street, much like the rest of the neighborhood in the last few years, has gone through expeditious development and increasing multicultural diversity. The HQ reflects this new social tissue, wedged between an old-looking local bar and a Chinese restaurant.

The electoral posters do not lie: the Honorable David Lametti warmly greets me as we get settled for the interview. Before diving deep into the questions I have prepared, his policy advisor warns me that the Minister will not be answering anything of substance regarding any files in progress. A shame, I think, as I internally mourn the questions I had prepared about the SNC-Lavalin case (A topic I had previously written about, in French), Huawei and its CFO Meng Wanzhou’s extradition to the US, the recent ruling on assisted suicide and the separation of the roles of Minister of Justice and Attorney General. Regardless, with the unpredictability of the upcoming federal elections, the next few weeks may be the last ones as Minister of Justice for Minister Lametti. There are still plenty of questions left to ask. How did this McGill Alumnus and professor at the McGill Law Faculty got to hold such a strategically delicate and important position, in his first mandate as elected MP?

In 1984, the Liberals, led by John Turner following the resignation of Pierre Elliott Trudeau, suffered a devastating defeat to Brian Mulroney’s Conservatives. It is during this period that McGill welcomes a young man disillusioned by federal politics and the internal Liberal quarrels between Turner and Jean Chrétien. The young David Lametti, setting politics aside for the time being, dives into the mysteries of Foundations of Law and Extracontractual Obligations, as well as devoting himself to the study of French. This story, to no one’s surprise, focalises around McGill University’s Faculty of Law. Minister Lametti explains that the strong presence of the university on Ottawa’s Parliament Hill is probably due to the school’s strong policy-orientation, as well as the bilingual component of both the institution and the city. Do we need to be reminded that the Prime Minister himself is a McGill Alumnus? Furthermore, the Faculty of Law’s integration of both legal systems in its curriculum is a precious tool for any future federal-level policymaker. Minister Lametti, cheekily smiling, does not miss his chance to underline the fact that he’s taught 6-7 McGill Law alumni in the liberal caucus.

Indeed, after obtaining his Masters of Law and PhD in philosophy from Yale and Oxford, this successful academic started teaching intellectual property (IP) at McGill in 1995. Despite leaving the university for Ottawa in 2015, Minister Lametti still has strong ties with the institution: his wife is a professor in the Faculty of Law, while his two older children are currently enrolled there. With his family close by and a full professor title secured in 2015, what pushed this successful and respected professor to make this risky leap into politics?

In 2012, after taking a sabbatical in Trento, Italy, Professor Lametti begins looking for new challenges to take on. Frustrated by the Harper government’s environmental policies, or lack thereof, and their disregard for  scientists and experts, the timing seems good to enter into politics. In the months following, he makes the decision to run for the Liberal nomination in the Lasalle-Émard-Verdun riding. This wasn’t his home riding, nor his family’s Ontario riding, so why this specific one? As a proud Montrealer, the booming cultural diversity was, and still is, appealing  to him, while strong presence of Italians as well as Scottish/Irish Anglophones offers an already existing cultural bond with a chunk of the electorate. He successfully secures the nomination but the campaign is far from over: following a restructuring of the riding, candidate Lametti has a steep hill to climb to win over sectors that were previously held by the Bloc Québécois and the NDP.

It isn’t until October 2015 that Professor Lametti becomes MP Lametti, representative of Lasalle-Émard-Verdun in Parliament. Following his election, he happens to be seated near Monique Jérôme-Forget, once representative of the riding including Lasalle at the Quebec National Assembly. She provides essential advice for the purpose of this particular interview and narrative: with his strong academic background, now that he is an MP many people will mention him in discussions concerning the Ministry Cabinet. He has to keep in mind that although being named a minister is a great honor, it rests just as much on luck and external circumstances as the qualities of the candidate considered. After my conversation with Minister Lametti, I realize how impactful this advice has been to him, as he remained humble and did not take anything for granted during his mandate, constantly seeking to learn from people with more political experience.

In the end, it is not shocking when MP Lametti is not chosen as Minister in the first Cabinet of the mandate, perhaps because he is new to politics, or for other considerations such as gender parity, province and territory or rural and urban balance. The elected MP nonetheless makes his entry in the government: each Minister chooses or is appointed a parliamentary secretary. Minister Freeland, mandated to negotiate the strategically important TPP and CETA treaties, seeks the IP expertise of Professor Lametti.

Hence in the following year the newly appointed Parliamentary Secretary to International Trade travels the world. Always briefed and supported by ministerial and consular staffs, he represents the country and Minister Freeland, preparing her visits and assisting negotiating teams. For instance, when the Wallonians become the last pocket of resistance to the CETA signature, he invites their delegation to Montreal while himself visiting them in Namur, preparing the grounds for Freeland’s final visit and the successful signature of the treaty. Negotiating international trade is an abrupt introduction to politics for a parliamentary secretary, or any person for that matter. Tying constant travelling around the world, debating in Ottawa, and spending time with both his family and his electorates in the riding together definitely steepened the political learning curve.

Innovating in a New Ministry

The election of the new American President forces PM Trudeau into a Cabinet shuffle in January 2017. Minister Freeland is deemed apt to address the unpredictability of Trump and is sent to Foreign Affairs. As a testament of the importance granted to the relationship with the US, the renegotiation of NAFTA will be tackled by this Ministry, while it traditionally would have landed in the files of the International Trade Ministry. While he was considered to support Freeland once again, Parliamentary Secretary Lametti is ultimately sent to the Ministry of Innovation, under Navdeep Bains, where his expertise in IP will be most beneficial. Andrew Leslie, who had been an officer in the Middle East with some high ranking advisors in the Trump administration, ends up assisting Freeland at Foreign Affairs.

The work at the Ministry of Innovation is strikingly different, much more domestically driven. He works towards the revision of the Copyright Act, as well as getting involved in a wide range of projects: from smaller scale ones such as coding for kids to national level investments in AI. In the end, his three years as Parliamentary Secretary provide him with the opportunity not only to learn alongside two highly respected Ministers, but also to develop strong links with members of the bureaucracy and the Liberal caucus, therefore providing him with tools to find resources and answers for his numerous projects.

On January 14 2019, Trudeau and his advisors not only deem Parliamentary Secretary Lametti ready for ministerial functions, but also bestow upon him the essential role of Minister of Justice. He is therefore in charge, among other files, of the sensitive extradition of Meng Wanzhou, catalyst of a series of diplomatic incidents with China. Furthermore, in February, the SNC-Lavalin scandal erupts and overshadows Minister Lametti’s appointment. Despite these considerations, his ties and resourcefulness towards his peers as well as his judicial background make him a strong candidate, especially for a Ministry which branches out to all others and requires collaborative teamwork.

Thus, the last months of Honorable Lametti’s mandate cannot be summarized only by the SNC-Lavalin scandal: initiatives towards revisions of laws and reforms, as well as a continuation of his predecessor Honorable Wilson-Raybould’s initiatives towards Indigenous justice. For Minister Lametti, climate and Indigenous affairs are the two issues that are the most pressing: he is adamant about underlining the efforts put in place for the Indigenous Peoples of Canada by himself and the Liberal Party during their mandate, although admitting that continued efforts are necessary. Considering how positive he views the achievements of the government in the last four years, I question him about the negative perception of the population towards his government. Taking a break to weigh his words, he shares with me what he considers to be one of the major challenges he has faced in politics: despite the Liberals respecting most of their electoral promises and economic indicators being generally positive, a few highly debated issues ⁠— SNC-Lavalin, the electoral reform, pipelines — have fostered dissatisfaction for many Canadians.

The campaign’s challenge is therefore to once again gain Canadians’ trust, which has decayed since 2015. For Honorable Lametti, this campaign will allow him to reconnect with his voters, of which he likes to feel close. When I ask him how he envisions a second mandate, his answer, filled with humility, rejoices me: “The day that I will think that I am entitled to a spot as Minister, it will be my time to leave.”

After an eventful first mandate, the numerous challenges he still needs to face channel his motivation and drives him towards seeking a second mandate, despite his professorate at McGill awaiting him. Reminiscing on the long journey that brought him to Justice and its beginnings at McGill, I ask him if he feels a bit politically threatened at home knowing that his wife — senator for the Law Faculty, and his son — senator in the Medicine Faculty, are both holding seats at the McGill Senate. “You know, Charles, I also held a seat there back in the days”, Minister Lametti answers, laughing. Considering how far this early political function ultimately led him, who knows if his son won’t follow in his footsteps and become yet another Minister Lametti?

Charles is the Editor-in-Chief of the MIR. He completed his History/Political Science BA at McGill before ~logically~ continuing his path at McGill's Faculty of Medicine. McGill once McGill twice, as they say. He focuses on International Relations as well as China and Québec politics.