From Mont Royal to Victoria Peak: the Free HK Protest 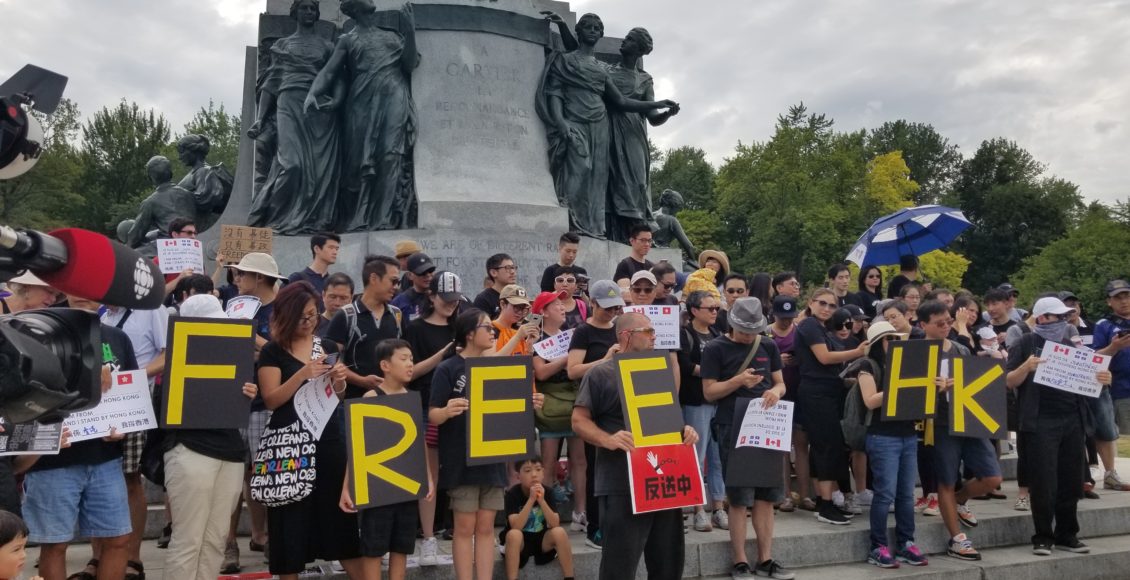 On August 3rd, Hongkongers from Montreal held a rally at the Sir George-Etienne Cartier Monument at Mont Royal Park. Protesters from around the city gathered to show their support for those in Hong Kong who are fighting for their freedom and autonomy. This show of solidarity was not an isolated case of Canadian Hongkongers standing for what they believe is right; the rally was held simultaneously in six other major Canadian cities: Vancouver, Toronto, Calgary, Ottawa, Halifax and Winnipeg.

On June 9th, over a million locals marched through the streets of Hong Kong to protest against the extradition bill. If passed, the bill would allow China to have more control over the extradition of fugitives living in Hong Kong. It would encompass offences from murder to fraud—giving the government a pass to use it for whatever crime the Hong Konger committed. Local authorities will have little to no power against an extradition order from Beijing, and they won’t even be able to examine the evidence themselves.

June 15th marked Carrie Lam’s indefinite suspension of the bill. The mass protests have been successful (at least for now) at pressuring the authorities to protect the interests of the people. While the halt is a small victory, Hong Kongers have not let their guard down just yet. Many activists have continuously pushed for more protests and demonstrations—arguing that they can only celebrate once the bill has been shot down or Lam resigns from her position as their leader. The acts of civil disobedience continue, with reports of widespread strikes and protests around the city for the ninth week in a row. Around 2,300 aviation workers went on strike— resulting in the cancellation of more than 100 flights at one of the world’s busiest airports. Protesters also disrupted the train service by blocking trains and keeping them at the stations, and demonstrators blocked major roads and highways to slow down the busy city.

Standing on the Mountain

On a clear Saturday afternoon, Free HK MTL held a rally to show support for their beloved city. Organizers taped small posters and infographics on the steps of the monument, and anyone could learn more about the extradition bill if they passed by. At the top of the steps was a mini Lennon Wall where demonstrators could write messages of love and support for their people and their city. Over 100 people participated in the event, and they were not limited to Hong Kongers; demonstrators of different cultural backgrounds were present to show solidarity. They held signs in French, English, and Chinese reading “Free HK” and other iterations of that message. Volunteers handed out flyers to people passing by with information on what is happening in Hong Kong, complete with infographics, statistics, a timeline of events, and a QR code linking to a petition on change.org. During the two hours gathering, protesters sang songs in Cantonese and English to show their appreciation for the freedoms they experience in Canada and their sorrow in the realization that the people living in Hong Kong don’t currently have that luxury. Many were brought to tears during the speeches of Free HK’s official spokespeople, including those who gave the talk themselves.

The protest was part of a simultaneous show of solidarity across Canada. Its goal was to show Hong Kongers and lovers of the city that there are those who will not stand for this injustice, and there are people who are willing to fight for Hong Kong’s freedom and culture. Simon Ng, who organized the event with ACTION Free HK-Montreal, wants everyone to know that.

A Message from the Mountain

Ng believes that the student population of McGill and beyond should be aware of what’s currently happening in Hong Kong, highlighting why this specific protest was held. The rallies being held globally are not only standing against the police brutality and the lack of response by the government but also aim to protect important ideologies: “something really really bad is happening in Hong Kong, and we are protecting not just something that is within Hong Kong locally, but we are also protecting universal values such as democracy, freedom of speech, and human rights.” He admires those university students who took a stand against the extradition bill.

For the Hong Kongers studying at McGill, Ng also has a message for them. He wants to let them know that they are not alone in what they are feeling; there’s something awful happening in the hometown that you love, yet you feel that there’s not much you can do from afar that will help the situation. Ng reassures these students that any form of support is helpful for the cause: “I know that if you just persevere and know that you are doing well and you just care about Hong Kong, just [sending] some support digitally would be really helpful, or sharing information on Facebook and [letting] your friends know about what happened in Hong Kong is an important thing as a Hong Konger.”

On a more personal note, Ng admitted that this protest is very meaningful to him. Hong Kong will always be his hometown, and he believes that if the extradition bill is passed, it will no longer be the city that he feels safe enough to come home to. In describing the protest, he states, “I’m happy that Hong Kong [is] safeguarding their freedom of speech and their important values. Particularly, these kinds of protests are initiated by young people, so I have a lot of respect [for] the people protesting on the streets, and for me that is extremely meaningful, and it teaches me how to safeguard our own values even though it’s a hard time.”