Hang ’em High, or Not At All 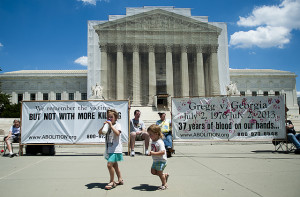 Capital punishment rarely shows its face anymore. In 1972 the U.S. Supreme Court abolished the death penalty, only to reverse its decision four years later in Gregg v. Georgia 1976, on the condition that states which legalize it comply with the 8th Amendment ban on “cruel and unusual punishment”. Since then, states have abandoned such primitive forms of execution as hanging, firing squad, and the electric chair, and have instead taken to the new and enlightened method of lethal injection. Today less than half of all U.S. states have outlawed capital punishment. Though many republican audiences still coo when a governor announces his number of kills, the death penalty’s federal permission has become a non issue in the states where it is illegal.

Casual opponents of the death penalty, however, find themselves chomping at the bit when forced to evaluate their stance. “Better to err on the side of not taking life. The teaching of the Catholic Church, to which I belong, seems right to me: The state has the legitimate authority to execute criminals, but it should refrain if it has other means of protecting people from th

em,” said Ramesh Ponnuru in a 2014 article for Bloombergview. “Still,” he went on, “when I hear about an especially gruesome crime, like the one the Oklahoma killer committed, I can’t help rooting for the death penalty.” Ignoring the implications of basing the government’s “legitimate authority” on what may or may not be Church doctrine, I shift your attention to the second part of that quote, to those “especially” horrible criminals who elicit that special craving for revenge.

The Oklahoma killer to whom Ponnuru was referring was a man named Clayton Lockett, who shot and buried alive a witness to his robbery. Lockett’s story made headlines in 2014 after his botched execution. The hours leading up to Lockett’s death are detailed in an article by Jeffrey St. Clair:

Lockett was supposed to be executed along with Charles Warner in a two night political show by Governor Mary Warner who, incidentally, “is usually adorned by a necklace with a dangling golden cross.” Lockett was tasered out of his cell in the middle of the night after stabbing himself in the wrist with a homemade shank. After ten hours shackled in a holding cell, he was brought by the prison warden to the execution chamber where the phlebotomist, most likely licensed through online courses, spent about an hour trying to find a vein. The phlebotomist stuck the needle in under Lockett’s groin, and put a blanket over it (to keep everything tasteful for the witnesses behind the walls, one supposes). The drug that was supposed to knock him out failed, and Locket woke up screaming while the other two drugs meant to kill him were being pumped into his groin. The execution was canceled, and Lockett slowly died over the course of the next half hour.

This publication of this gruesome display didn’t do much for Governor Fallin’s career, but mercilessness as Governor has been and often still is a form of currency in gubernatorial and even presidential races. In the 1992 presidential race, Bill Clinton made this clear when he refused clemency to Ricky Ray Rector, a man so mentally empty that as the guards came to take him away he told them he would save his last slice of pecan pie for later. In his first two-year term as governor, Clinton commuted the sentences of 70 inmates. In 1980, he lost his bid for reelection to an opponent who accused him of being soft on crime. Following his successful reelection in 1983, Clinton 9 (having learned his lesson) commuted a grand total of seven sentences over his next four terms. The idea that this champion Democrat used the execution of a mentally retarded black man as political capital is not easily swallowed by today’s progressives, but it is nonetheless typical of the cynicism and general scumbaggery that characterizes Bill Clinton and his breed of politician.

In states south of the Mason Dixon, and west of the Mississippi, this kind of trading in lives of the condemned is neither rare nor surprising. Most people have forgotten about la 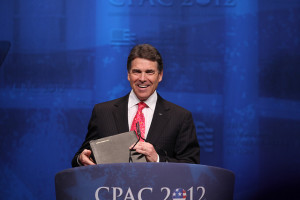 st American frontiersman and ever-so-brief star of the 2016 presidential campaign Rick Perry, but he forges ahead ever stalwart. In 2012, in the midst of another failing presidential campaign, then governor-of-Texas Perry was handed an opportunity to flash his supreme record on execution when in a debate he was asked whether or not he worried some of those killed may have been innocent. When moderator Brian Williams cited the 234 inmates executed under his watch, the crowd went wild, and Perry’s eyes began to glitter as he put on his serious face. Support for the death penalty has become an easy way for candidates to grandstand during debates, and to make their opponents look weak or even depraved. Michael Dukakis never quite recovered from his uncomfortably lifeless response to Bernard Shaw’s question whether he would support the death penalty if his wife was raped and murdered. Still, no was the right answer.

Not too long ago, people like Rick Perry bonded over public hangings. They brought blankets and had family picnics. Ancient Rome had it even better. Today, all that we usually get are news reports, to which many people – if not most – respond with the same “rooting for the death penalty”. It is time either to entirely outlaw the death penalty or to reinvigorate it. If we’re going to root for torturing criminals to death, let’s make it a public torturing, in Aztec style, and find out just how cruel and unusual we all can be.