“He died like a dog”: the Death of al-Baghdadi and the American Glorification of Violence 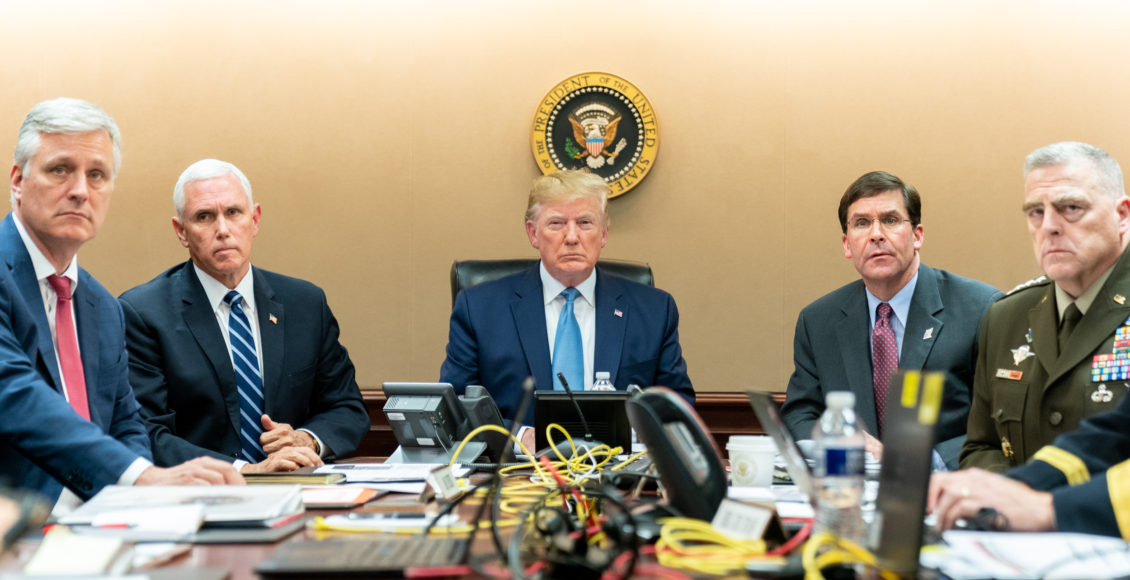 On the 27th of October, President Trump declared that US forces had conducted a raid in Syria that culminated in the death of ISIS leader Abu Bakr Al-Baghdadi. However, rather than commending the historic achievement and its implications regarding the return of peace in the region, Trump turned the announcement into a spectacle. In contrast to Obama’s measured tone after the death of Al-Qaeda leader Osama bin-Laden, Trump’s rhetoric sensationalized al-Baghdadi’s death, recounting the violence of the operation with relish.

Admittedly, announcing the successful execution of a terrorist is a tricky affair. Yet, past presidents have refrained from boasting about similar events in such gratuitous ways in order to maintain some form of US integrity. Democratic governments tend to avoid being too ostentatious when forced to announce the achievements of state-sanctioned killings. When Obama solemnly spoke about the assassination of Osama Bin-Laden, he emphasized the need for unity and the preservation of American values. Trump, unsurprisingly, chose a different path.

After the official announcement, the President spent 40 minutes answering questions, during which time he revealed, among other things, exactly how many US helicopters were used in the operation and the location of the tunnels used by ISIS soldiers as they fled. Acts of war are not like video games. They are real, and they have consequences. This kind of intel, when made public, could make it harder for the US to combat ISIS in the future and by revealing extensive amount of detail regarding the operation, Trump puts US troops in Syria in danger.

Something very big has just happened!

Besides putting the US’s own military forces and their allies in jeopardy, Trump’s rhetoric also catalyzes the demise of US moral authority as an international actor. Historically, the US has championed the dissemination of liberty and cited their own set of democratic values as justification for committing acts of war. However, the current US president seems more inclined to revel in the violence itself. The day before his formal speech, Trump tweeted: “Something very big has just happened!” in reference to Baghdadi’s death. He also described the viewing of the raid from the situation room like “watching a movie”. Making the actions of the US military in Syria sound like a cliff-hanger on a reality TV show further detaches the American public from the severity of the situation, and undermines the legitimacy of US intentions.

In his speech, the US President said: “Baghdadi died like a dog” and “Baghdadi and the losers who worked with him — and losers they are — they had no idea what they were getting into. In some cases they were very frightened puppies, in other cases they were hard-core killers.” This kind of distasteful and chauvinistic rhetoric downplays the serious gravity and possible ramifications of the event. The fact that the American response to Baghdadi’s death is a self-aggrandizing victory lap, is undeniably troubling.

In Obama’s address to the nation after the successful assassination of bin-Laden, he made sure to underscore that the US was not “at war with Islam”. Obama made it clear that “Bin-Laden was not a Muslim leader; he was a mass murderer of Muslims”. This necessary distinction aims to avoid the unfair scapegoating of Muslim minorities in the Middle East. Trump, however, made no such contrast. In fact, he entirely neglected to mention how ISIS has targeted Muslims, stating: “the execution of Christians in Libya and Egypt, as well as the genocidal mass murder of Yazidis, rank ISIS among the most depraved organizations in the history of our world”. Trump is quick to make high-profile comments when violence is perpetrated by Muslims, but rarely speaks out when Muslims are affected by violence. This fails to account for the complexity of the situation. Considering the US’s currently politically polarized climate, the perpetuation of an “us vs them” narrative can have very dangerous consequences.

Although Trump’s brash mannerisms over the past three years have made him into something of a joke for the international community, his words still matter to his supporters. Clear parallels can be drawn between Trump’s anti-immigration jargon, and the inciting of violence against minorities by Trump supporters. In the aftermath of the El Paso shooting, Democratic presidential candidates blamed Trump for inspiring violence by “condoning and encouraging white nationalism”. Apparent links can be made between his divisive language and an increase in mass shootings. The president’s labelling of an increase in Latinx immigrants as an “invasion”, was directly mimicked in the online manifesto published by the El Paso shooter, as he referred to the “hispanic invasion of Texas”. With regards to Al-Baghdadi’s assassination, statements like: “he spent his last moments in utter fear, in total panic and dread“, glorifies violence in a nation that can not afford to fan the flames of political extremism and domestic terrorism.

Considering his rhetorical record, Trump’s inability to handle the gravity of the situation is unsurprising. Yet, the perpetuation of a culture that glorifies violence, particularly with regards to certain minorities, cannot be brushed aside. Days prior to the announcement of Baghdadi’s death, the president’s decision to withdraw US troops from Syria left thousands of Kurds vulnerable on the Turkish border, resulting in hundreds of deaths. Trump’s words incite violence domestically, and his recent actions have garnered heightened bloodshed abroad as well, such as in Syria. This shows how the US president is apparently unable to understand the human consequences of his words and actions. By saying that Baghdadi “died in a vicious and violent way, as a coward, running and crying”, Trump makes killing sound like a sensationalized sporting event. The normalization of such attitudes towards brutality is not the kind of encouragement that a population with easy access to firearms needs.