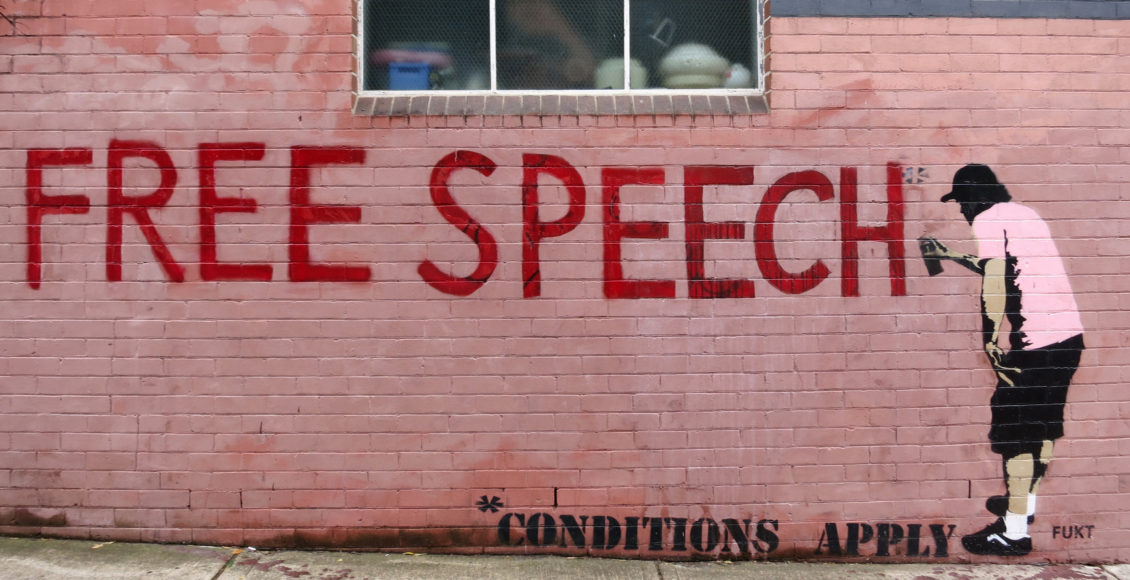 “I disapprove of what you say, but I will defend to the death your right to say it.” – Hall

Evelyn Hall illustrated Voltaire’s beliefs in the principle of freedom of speech with the above phrase. The sentiment remains  common in today’s society in which a divergence in opinion does not give justification to the silencing of speech. What is consequential to this freedom in contemporary society is the perpetuation of “hate speech.” The term is defined as an unacceptable attack upon an individual or group based on differences of distinguishing traits of identity. The freedom to express remains a basic guarantee in many countries around the world, allowing an individual or a community to vocalize their opinions without fear of retribution. In contrast, hate speech is a sub-clause to this freedom.

This invisible line is drawn by government regulations. However, when poorly drawn it can leave us with administrative biases turned social norms that restrict and undermine our freedom. To examine this question, two polarized cases on either end of the spectrum will be analyzed.

In 2015, the Israeli government cracked down on all forms of Palestinian media, including shutting down radios, convicting numerous journalists and policing social media websites. After posting her poetry on social media, the Arab-Israeli poet Dareen Tatour was arrested on grounds of hate speech, initiating a court case that was finally settled in her conviction and sentencing on July 31st, 2018.

The 36-year-old Palestinian poet and photographer from Reinah, Israel took to YouTube and Facebook in October of 2016 to release her poem “Qawem Ya Shaabi Qawemahum” or “Resist, My People, Resist.” Tatour recorded herself reading her poem and used it as a soundtrack over footage of Palestinian youths flinging stones and firebombs at Israeli soldiers.

In May of this year, Tatour was convicted of incitement of violence online along with a charge of supporting ‘Islamic Jihad’, a Palestinian militant group aimed at an uprising.’ Official minutes released by Israel’s Justice Ministry declared a five-month imprisonment of the poet coupled with a six-month suspended sentence added to her jail time. Tatour reaction remained as she “… wasn’t expecting justice to be done.” Her statement to reporters maintained, “The case was political from the start, because I am Palestinian and support freedom of speech.”

Translated by Tariq al Haydar, the significant lines of the poem were:  “Resist, my people, resist them./ Resist the settler’s robbery/ And follow the caravan of martyrs./ Shred the disgraceful constitution/ Which imposed degradation and humiliation/ And deterred us from restoring justice.”

After posting the poem, Tatour took to Facebook once again. Coupled with what Israeli officials claim was a calling for “a continuation of the Intifada,” she had posted three photos exhibiting Israeli security forces and religious radicals killing an Israeli-Arab woman and two Palestinian children. She had added a description in Arabic: “I am the next shahid.”

The publishing of the poem coincided with an outbreak of frequent and fatal attacks by Palestinians on Israelis coined the ‘Stabbing Intifada.’ The Israeli government believed online incitement fuelled the violence, and as a solution a legal crackdown was launched. Official government raids saw the shutting down of numerous radio stations, television channels, and newspapers. While journalists were convicted or killed in the masses, the surveillance of Palestinians using social media justified civilian arrests. In context of the violence and fatalities, authorities claimed Tatour’s poem was a call for violence, arresting her a few days later.

She vehemently denied the accusation, claiming the Israeli authorities were misinterpreting her work. She claims her poem called for non-violence within the struggle rather than an exacerbation of the existing brutality, regardless of which side was exhibiting it. The case quickly became notable in the freedom of speech debate. Advocates both within Israel and abroad began to advocate for Tatour’s rights. Further, it drew attention to the Israeli government’s use of technology as they search social media for suspicious users inciting violence or attacks.

In regard to the case of Israel and Palestine, the international community has affirmed that stifling of Arab-Muslim voices are due to Israel’s definition of hate speech. Tatour’s case shows Israeli officials are quick to judge Palestinian’s actions thus, racial prejudice is central to their interpretation of Palestinians’ stories as an incitement of violence. With the divergence of ethno-religious identity at the core of the conflict, is separating this rhetoric from each narrative possible? Is the vocalization of Palestinian stories an expression of hatred for Judaism and Israeli citizens? Or is it simply the telling of a story in which one side’s sorrow is effectuated by another? Where do we draw this line?

The United States of America is a state hell-bent on protecting the right to express. This freedom is constitutionally protected in the US- a feature not all modern democratic states possess. However, within this freedom of speech subclauses exist condemning hate speech. Yet, simultaneously hate speech is protected and perpetuated. Society’s tendency to favour their freedoms is a common conviction in America. The current administration’s nonchalant use of discriminatory statements is concerning. The Trump administration is consistently controversial. However, by focusing on the President and those who work for him’s rhetoric the lack of regulation of discourse is evident.

“I am not a racist. I’m the least racist person you have ever interviewed.” – Trump

The First Amendment, protecting freedom of speech, is constitutionally engrained in the US. While ratifications and court cases have circumscribed the amendment somewhat, hate speech remains protected. The doctrine of government speech allows the administration to speak without necessitating viewpoint neutrality. This allows state speech to make content-based choices. The Trump administration has taken advantage of their protected rights in this context.

The 45th president of the United States, better known as Donald Trump, is the instigator in chief of unregulated speech, infamous for his frequent outbursts on Twitter and the prejudice embedded within his formal speeches.

Race remains an area of contention within the US since its foundation. As Trump took office the designation between coloured and white became ever more clear in both government policies and altercations within society. During a conference on a proposal for a bipartisan immigration deal, he directly references the states of Honduras, El Salvador, and Haiti as “shithole countries.” Going beyond government, he expressed his position against the NFL protests against police brutality and racism. Trump publicly advising NFL owners to fire whatever “son-of-a-bitch” kneels violates their right to protest which highlights who is allowed to have a voice in America.

Regarding religion, Trump’s claims of “the Muslim Problem” have surpassed his rants on social media to reach policy implementation. His first executive order of 2017 banned refugees and citizens from Iraq, Syria, Iran, Libya, Somalia, Sudan, and Yemen. Effective immediately, chaos ensued globally as many were detained in airports and others gathered in protest. Claiming terrorism, he furthered his Islamophobic reach through mosque surveillance, airport screenings, and numerous public statements claiming, “Islam hate us.”

As far as sex goes, it is no secret Trump disrespects women, exemplified by his initial campaign against Hillary Clinton. After deeming Clinton a “nasty woman” he went on to take shots at her personal history during her husband’s time in office. Sexual misconduct allegations have been ignored and public statements about women in his administration and his personal life have been encapsulated by a variety of derogatory insults aimed at appearances. Despite recently calling adult-film actress Stormy Daniels “horse face,” he continues to dismiss his many years of “locker room talk.”

What is important in the case of the US is how this formal and informal hate rhetoric affects society. Across the demographic spectrum, the American public is now even more polarized, divided, and disconnected. As a result, the rising instances of harassment and attacks against minority and marginalized groups in the public and private spheres are increasingly a cause for concern.

The American case exhibits how freedom of expression can result in a further marginalized society. Race, religion and sex have been neglected through Trump’s discriminatory, xenophobic, and sexist comments that ultimately deepen cleavages within society. Although we see a rise in marginalized groups joining together against repression, American administrative policies and the rhetoric used has heightened the insecurity of these individuals within the state. Consequentially, a lack of fear is prominent in alt-right groups as they voice hate speech and continue to escape blame.

The administration has exhibited this behaviour since the beginning of Donald Trump’s presidential campaign. Yet, Trump remains in office, the calls for impeachment have quieted, and societal cleavages continue to affect marginalized Americans in the worst ways possible. Therefore, a question to be asked is whether or not freedom of expression is overprotected in the US? Is the presidential administration’s freedom to speak its mind just a vocalization of hostile views against Americans? Are the effects on society negative in the rise of attacks or positive in the rise of social movements? Could this situation be avoided altogether if we drew a stricter line on what constitutes hate speech?

Balancing on the Line

The Israeli government displays one end of the spectrum through their legalized crackdown on Palestinian media in claims of hate speech and incitement of violence. These censorship policies predate the 2016 cabinet decision as attacks on oppositional media have been legal and consistent since 1948. Palestinian narratives are silenced by fear of repercussions.

On the other end is the United States- specifically, the Trump administration. The US constitution pre-eminently protects the freedom of expression with the First Amendment. However, this inherent right frequently results in the perpetuation and subsequent protection of hate speech in not only government, but society as well.

Balancing on the line between free speech and hate speech is increasingly difficult in contemporary society. We see the overregulation of free speech infringing on the rights of citizens in Israel and Palestine versus the lack of regulation of hate speech resulting in a deepening of racial and class-based cleavages in the US. The ramifications that arise from each end of the spectrum justify the notion that as a global society, we lack a middle ground. Where do we find this middle ground? Does it exist? Will it ever exist? Or will the invisible line regulating free speech from hate speech continue to jump from one end of the spectrum to the other?