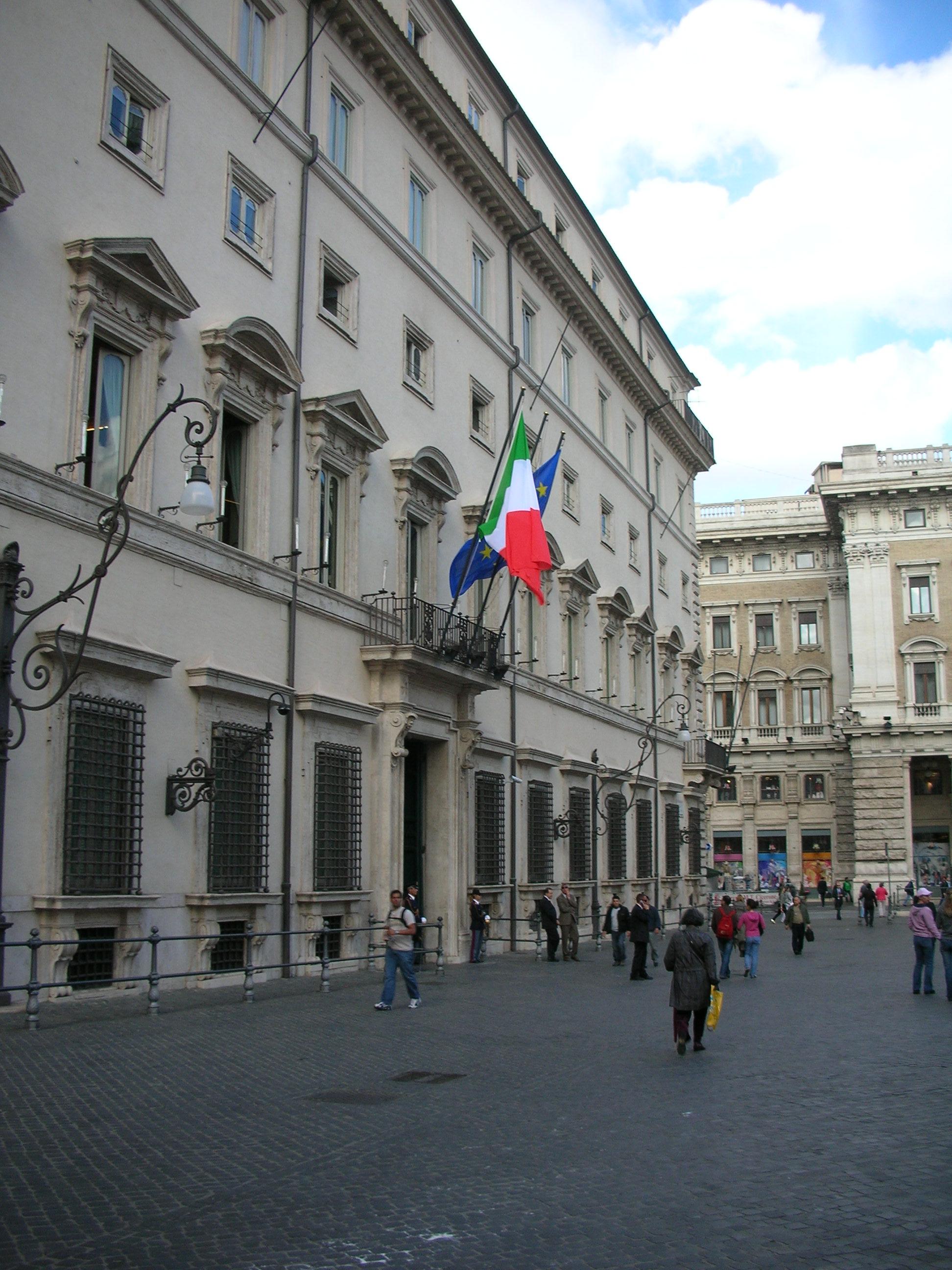 The Palazzo Chigi, official residence of the Italian Prime Minister. No less than twenty-eight men have occupied the residence since the war.
Share

Italy’s politics is currently paralysed. Since the resignation of PM Matteo Renzi last December, the majority of the population and most political parties want an election, even though one is not scheduled to occur until next year. The country is now on its fourth consecutive unelected PM, Paolo Gentiloni. Even as he leads the government, Renzi remains behind the scenes, calling the shots for his party and itching to get back into power.

Yet an early election cannot occur immediately, and for a reason that should be of interest to Canadians: the various parties are in discussions with each other to change the electoral system. Italy has seen this debate proceed on and off for more than two decades. The numerous reforms that have emerged from this debate demonstrate perfectly the various tradeoffs that electoral reform entails, and illustrate the idea that no electoral system is perfect.

Let’s Start At The Very Beginning

Following the war, Italy ran elections using proportional representation (PR), with a very low barrier to entry – any party with 300,000 votes nationwide was entitled to seats, as well as some even smaller parties with regionally concentrated voters. The era was characterized by competition between the pro-West, pro-European, catch-all Christian Democracy party (DC) and the Communist Party of Italy. Every election saw at least six other parties also enter parliament and produced the same outcome: a coalition between Christian Democracy and similar pro-European parties. The former party usually determined the Prime Minister, being the largest in the coalition.

In the 1980s began a tradition of Pentapartito, an all-encompassing grand coalition of Socialists, Social Democrats, Republicans, Christian Democrats, and Liberals – essentially everyone maintaining the liberal-democratic, pro-Western order against the Communists and neo-fascists. There was no credible opposition.

Although stable in the long-term, the marriage between these ideologically diverse parties had friction, with each party threatening to bring down the coalition unless certain conditions were met. As a result, the 48 years between 1945 and 1993 saw 52 governments rise and fall. Unlike many European democracies, each government needed a majority in both the Chamber of Deputies (Camera dei Deputati, henceforth referred to as the “Camera”) and the Senate, which did not help with stability. When famed political scientist Maurice Duverger analyzed the differences between majoritarian and proportional systems, Italy was held up as the poster child of dysfunctional proportional system.

Constant bickering among parties characterised Italian local and regional politics as well, leading to considerable resentment against the so-called “party-ocracy” (partitocrazia), especially as the lack of alternative governments meant that votes were won, and the economy was run, through patronage.

Two main events aligned to shake Italy’s party system to its core. Firstly, the collapse of the Soviet Union compelled a bulk of the Italian Communist Party to abandon its communist ideology and become the Democratic Party of the Left. Secondly, a major corruption investigation called mani pulite, or “clean hands”, incriminated every major party in Italy. Italians were exasperated at the cartel of political parties and were convinced that it was kept in place by the electoral system.

Thus, the reform process began in earnest following the 1992 election, which had produced the most fragmented parliament on record. The fact that Great Britain’s election, held on the same year as Italy’s, featured two credible options for government and yielded a stable single-party majority was the object of admiration from Italians. Adopting a system of single-member districts became the next step.

However, the new system, adopted in 1994, would not entirely be composed of single-member districts (i.e. the first-past-the-post system, or FPTP). To minimize the risk of creating lopsided majorities, a system known as “Scorporo” was created that featured both single-member district seats and proportional seats; it was similar in logic to mixed-member proportional (MMP) representation. “Scorporo” roughly translates to “deduction”, and refers to the calculations by which all the votes from losing district candidates are added together to allocate the PR seats to avoid double counting.

In MMP, some seats (usually half) are filled through single-member districts, while the rest are filled in a way so that total seats match total vote share. Parties that are disadvantaged by the distortions of FPTP get more PR seats (this is known as a “compensatory” system). It is this system that the NDP recommends for Canadian elections. Scorporo is different in that only one-fourth of the seats are filled proportionally – with the result that parties that do well in the districts end up with an overall advantage. (Scorporo also performs the calculations at the vote level, before they are converted into seats, while in MMP the calculations are done at the seat level.)

Scorporo has the benefit of using a single ballot, unlike MMP where each voter must cast two ballots. Scorporo is also better than FPTP in that minorities in a district still have an incentive to vote because their vote would go towards electing a proportional MP of their party.

However, if you live in an uncompetitive district and you’re part of the majority – you still have no incentive to vote, as your vote would be deducted in the PR calculations. There is a relatively easy solution for this – don’t deduct all the winner’s votes and instead keep the winner’s “surplus” votes – and the bizarre thing is that this was a flaw that existed only in the Senate rules and not in the Camera rules.

However, as if to balance out this fix, the Camera rules included several other flaws – there were separate district and proportional ballots, and the rules left open a gaping loophole that allowed new centre-right leader Silvio Berlusconi to run his candidates using fake parties to game the system and get more seats. (Berlusconi, in the ultimate act of thumbing his nose, named his fake party “Abolish Scorporo”.) Except his trickery worked so well that he did not have enough candidates to fill all his ill-gotten seats, with the result that twelve seats in the Italian Parliament remained unfilled for the 2001-06 parliament.

The system did not last long. The slightly different rules in the Camera and Senate did not help with stability, and in any case the number of parties increased, contrary to expectations. Instead of two main parties (Berlusconi’s “Go Italy!” and Romano Prodi’s Democratic Left) slowly gaining dominance, they formed alliances with numerous smaller parties, handing them safe seats in return for a promise not to run against them, and to support their cabinet once in parliament. The second part of the agreement was harder to uphold. The coalitions featured parties without very much in common and they often fell apart post-election, with the result that the first seven years under the new system saw six governments rise and fall in succession. This could probably have been fixed by using preferential voting (a system that eliminates the spoiler effect), but instead, reform came from an entirely different direction.

In 2005, Berlusconi, then Prime Minister for four years, decided to get rid of the district system and scorporo because it disadvantaged his right-wing party. His solution was that each party’s votes would be pooled together nationally rather than by district, and that the party or coalition with the most votes would get bonus seats, guaranteeing it a majority. Major parties would still have an incentive to combine with other parties. This would produce a two-coalition system, and the stability and potential for alternation that Italians so craved.

Political science suggests majoritarian systems tend towards two parties. However, there can be interim periods of disruption featuring strong third parties. Such periods of disruption often lead to hung parliaments/minority governments and early elections under FPTP. But in Berlusconi’s system the largest party is always handed a majority, however few votes they may get. For instance, the Five Star Movement, essentially with a credo of telling politicians to screw off, stormed onto the political scene in 2013 and won a quarter of Camera votes. Berlusconi’s coalition was at 29.18%, while the centre-left coalition was at 29.55%. The centre-left coalition was given 345 seats and an absolute majority since they garnered the largest number, even though 70% of Italians voted against them. Following the elections, the Constitutional Court declared Berlusconi’s electoral system unconstitutional.

Matteo Renzi, the young, dynamic Democrat (centre-left) who became Prime Minister in 2013, spearheaded the third electoral reform effort in twenty years. It was essentially a fix of the Berlusconi system – the leading party could only win the bonus seats if it gets over 40% of votes; if not, there would be a runoff between the two largest parties to determine who would get the bonus. Coalitions would not get preferential treatment over single parties, solving a major side-effect of past reform efforts.

Renzi’s attempt to overhaul every dysfunctional Italian institution ever was ambitious, perhaps too ambitious. His failure to oversee much economic growth and the controversial nature of his reforms dented his popularity. Last December, after his plan to transform the Senate into a consultative body representing the regions (i.e. no longer elected) was defeated by referendum, Renzi resigned, leaving behind an electoral law for the Camera but none for the Senate.

Yet, today’s political climate in Italy is arguably least suited for PR, due to a new divide between “establishment” and populists. Were an election to be held today, there would likely be an “anti-majority” of populists (Five Stars and Le Pen-aligned nationalists) who would not work with establishment parties (Renzi and Berlusconi) but are also unlikely to work with each other. The Five Stars in particular have forsworn all electoral alliances. No government would be able to form.

However, political parties seem resigned to this reality. Efforts of the last two months to revise the electoral system have centered around two proposals: a semi-proportional system (half FPTP, half PR, not compensating) and the fully proportional “German system” (i.e. MMP – same as above but with compensation). Party fragmentation would be somewhat reduced by only allowing parties with more than 5% of the vote to enter parliament.

Both options would create fractious coalitions and would, some are arguing, no longer give a choice between alternative governments, only a choice between parties. Yet, there is also wide agreement that to move to something like pure FPTP would be to ignore the multiparty landscape. Preferential voting and the French two-round system would both help in marrying stability and a multiparty system, if that is what Italians desire, but support for these options is limited to the occasional opinion column.

The numerous European elections held this year show just how crucial it is to find a proper electoral system. The Dutch’s extreme form of PR has created a fractured parliament and seemingly relentless negotiation, to no avail. Conversely, with Germany’s MMP system establishing a 5% threshold for parliamentary representation, their September elections are expected to yield a stable coalition of the conservative right, the free-market right, and centrist Greens. Meanwhile, the French elections of May and June allowed Emmanuel Macron to win not just the presidency but a majority in Parliament as well.

At the same time, north of the Channel, the Labour-Tory two-party system thoroughly reasserted its authority. As was the case in 1992, Britons have two competent and compelling alternatives for government. For Italians, that is a prospect that remains as much of a pipe dream today as it was when they embarked upon their electoral-reform adventure 25 years ago.