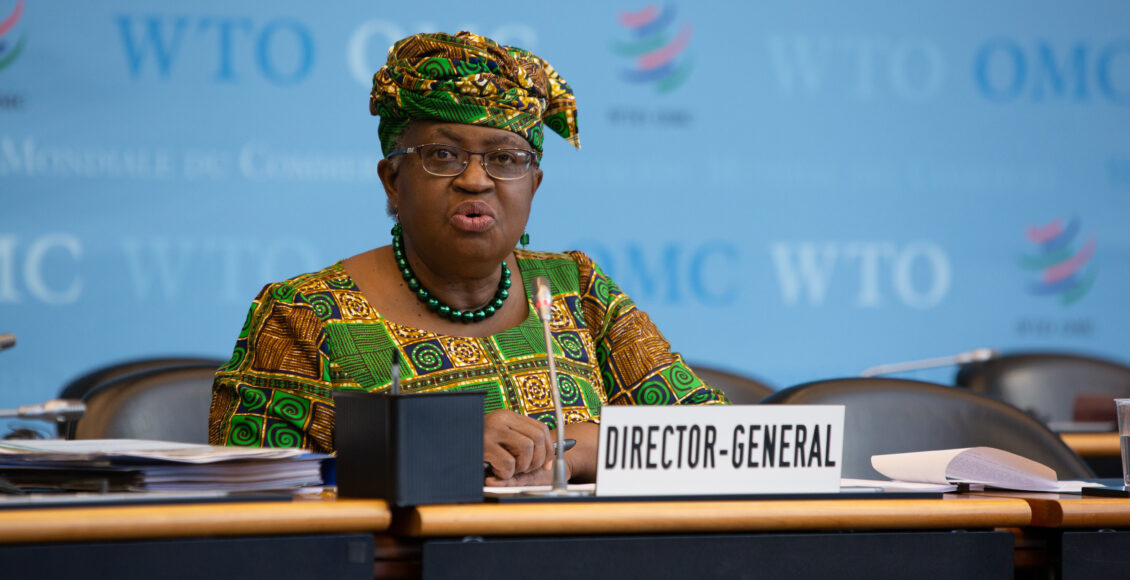 On March 1, 2021, Ngozi Okonjo-Iweala became the seventh Director-General (DG) of the World Trade Organization (WTO) in a historic election of the first woman and first African to hold the position. The Nigerian economist succeeds Roberto Azevêdo, who stepped down as DG in August 2020 amid pandemic-fuelled economic turmoil. Her renewable term will expire in four years, giving her the appropriate time to reform and modernize the broken organization.

A Director-General of many firsts

Born in Nigeria, Ngozi Okonjo-Iweala graduated magna cum laude with an economics degree from Harvard University in 1976 and obtained her Ph.D. from the Massachusetts Institute of Technology in 1981. Her first bout with history was her appointment as Nigeria’s first female finance minister from 2003 to 2006, 2011 to 2015, and finally, as a foreign minister in 2006. Before serving at the WTO, Okonjo-Iweala spent 25-years at the World Bank, ascending to Managing Director, where she handled the $81 billion USD operations budget in Africa, South Asia, Europe and Central Asia during the 2008 food and financial crisis. Additionally, Okonjo-Iweala currently sits on the boards of Twitter and Gavi the Vaccine Alliance, and left the board of Standard Chartered this year.

In February 2021, Ngozi Okonjo-Iweala was appointed by the WTO General Council following a nine-month-long selection process. In July 2020, eight candidates were nominated by their respective governments, until two remained for the final stage in October — Okonjo-Iweala and her rival, the Republic of Korea’s Minister for Trade, Yoo Myung-hee, who was the first woman to hold the position.

The absence of American cooperation

In her incoming term as Director-General, one of Okonjo-Iweala’s major challenges will be supervising the United States’ relations with the WTO and its trade collaboration with the other members. Thankfully, President Biden’s administration will likely be more cooperative than its predecessor who actually delayed Okonjo-Iweala’s designation.

The selection process was, in fact, blocked by the Trump administration, which supported Yoo Myung-hee, arguing that appointing Ngozi Okonjo-Iweala was “a mistake,” as she lacked experience in the trade. This sabotage attempt was eventually rendered useless by the support of 163 member-states and Biden’s backing for the candidate in February, sparking the withdrawal of Myung-hee’s candidacy.

During Trump’s presidency, the WTO experienced some of its most complicated times since it was created in 1995 after the Marrakesh Agreement. Today, the WTO faces a strained world economy under the pressure of American hegemony and the rise of a new economic superpower in Asia. The present situation primarily reflects the 2018 US-China trade war, wherein both countries established trade barriers, including tariffs, following Trump’s accused China of unfair trading practices and intellectual property theft.

The economic conflict between the two superpowers directly defies WTO’s mandate, and that of its predecessor, the General Agreement on Tariffs and Trade (GATT). Conceived in 1948 following World War II, GATT aimed to promote and facilitate international trade by reducing tariffs and eliminating trade barriers. While GATT mainly dealt with the exchange of goods, the WTO additionally covers services and intellectual property. The WTO also provides a framework for negotiating free trade agreements like the Comprehensive and Progressive Agreement for Trans-Pacific Partnership (CPTPP) and settling disputes like the US-China trade war.

The international organization has not succeeded in resolving the economic conflict between China and the United States, causing economic damage on both sides of the Pacific. While the WTO ruled in September 2020 that American tariffs on Chinese goods were inconsistent with international trade rules, the Trump administration rebuked, claiming the WTO favoured Beijing and was unfair to the US. Indeed, Donald Trump sought to damage the World Trade Organization’s integrity and the world’s trading system by threatening to withdraw in 2018, saving the country’s annual contribution of USD $24 million.

Furthermore, the US blocked the appointment of new judges to the Appellate Body, the WTO’s system for dispute settlement. Without any judges since November 2020, the WTO has been unable to perform one of its main duties, settling disputes, like the US-China trade war. Okonjo-Iweala’s intervention to unite the WTO and Biden’s administration will prove crucial to the organization’s future stability.

An organization with much-needed reforms

While heavily dismissed by Trump and his supporters, the WTO remains essential for the wellbeing of international trade and will play an integral role in remediating global economic, environmental, and health crises. Given the globalized nature of financial crises and pandemics, multilateralism based on states’ trust in intergovernmental organizations like the United Nations and the WTO is the most efficient route towards coordinated peace and security.

For the WTO to regain its central position as a regulator of international trade, it first needs “extensive and serious reform,” as expressed by Ngozi Okonjo-Iweala. The disrupted dispute settlement system required amendment for all 164 members to trust the organization. Apart from these tensions, Okonjo-Iweala also faces the challenge of incorporating climate change provisions into international trade policy. As the co-chair of the Global Commission on the Economic and Climate, she believes the environment is deeply connected with the global economy and calls for implementing a carbon border tax. Finally, the new DG emphasized the importance of cooperation in the context of the COVID-19 pandemic to reduce restrictions on medical goods exports, such as vaccines.

Beyond the historic significance of Ngozi Okonjo-Iweala’s election as seventh Director-General of the World Trade Organization, she faces enormous challenges to reform a crippled trade institution. Marred by an intense trade war, the COVID-19 pandemic, and seven months without a leader, the present fate of the WTO rests in the hands of Okonjo-Iweala.