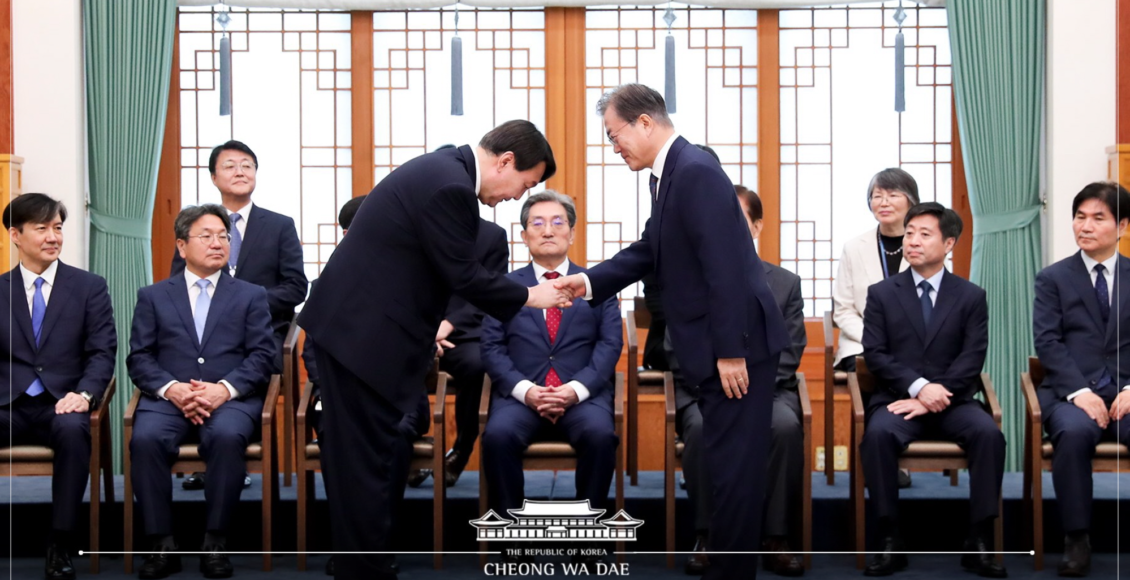 On March 9, 2022, Yoon Seok-youl — the candidate for the conservative People Power Party (PPP) — was elected South Korea’s thirteenth president. Yoon defeated Lee Jae-myung, the liberal candidate of the ruling Democratic Party of Korea (DPK), in a narrow victory, winning 48.6 per cent of the votes against Lee’s 47.8 per cent.

South Korea is a highly polarised country, and the two presidential candidates embody what the two major political parties stand for. Lee Jae-myung, a former governor of Gyeonggi Province, came from a poor, working-class background and built his reputation as a human rights lawyer and politician. Lee’s election campaign was focused on the push for social welfare programs and universal basic income — a stark contrast with Yoon’s pledge for a private sector-led economy.

Yoon Seok-youl has been the main subject of major corruption and political scandals leading up to this presidential election. Accused of abusing his power during his time as Prosecutor General, Yoon faced a cycle of disciplinary actions that forced him to resign from his position. However, corruption among the PPP’s presidential nominees is not a new trend. Yoon’s political career is reminiscent of Park Geun-hye’s — Korea’s former president who was convicted for corruption and impeached in 2016 following a major political scandal that rocked the entire nation. Park was the presidential nominee of the conservative Liberty Korea Party, which has since had a rather complex history of rebranding and merging to evolve into today’s People Power Party in an attempt to revive its reputation.

Park’s political scandal was a wake-up call for Koreans, as attested by the victory of the incumbent President Moon Jae-in in the 2017 elections. Five years later, however, the Koreans have voted in favour of Yoon, Park’s successor. The recent presidential election results say much about Korean society today and is an indicator of the recurring political trends that continue to threaten the nation’s democracy.

From a regional standpoint, the presidential election results were not surprising. Regional allegiance to either party has remained stagnant throughout South Korea’s democratic history. This year, 72.8 per cent of North Gyeongsang Province voted for Yoon, while North Jeolla Province (Jeonbuk) and South Jeolla Province (Jeonnam) accorded the DPK much of its votes, with 83 and 86.1 per cent voting for Lee, respectively.

Regional allegiance for the conservative party, in particular, is attributable to regional favouritism, which was predominantly practised during the era of military dictatorship in the 1960s and 1980s. Political elites strategically promoted economic development in certain provinces, such as North Gyeongsang, while other regions such as Jeonbuk and Jeonnam were strictly excluded from industrialisation. The practice of regional favouritism has heavily affected the course of development in certain provinces, which has essentially generated a practice of voting based on regional allegiance — namely, the rich provinces continually garnering significant votes for the conservative party.

With the exception of the young voters, there was a substantial age divide between supporters of Yoon and Lee, largely consistent with their usual voting patterns. Based on the exit poll, Yoon won most of his votes from voters in their thirties and sixties, while Lee gained the most support from voters in their forties and fifties.

In particular, Yoon gained an overwhelming amount of support from voters in their sixties and older — accounting for close to 67 per cent of votes, in contrast to Lee’s 30 per cent. Voters currently in their sixties and older are Korea’s postwar baby boomers. Many of them believe that South Korea’s rapid economic growth is ascribable to Park Chung-hee’s authoritarian regime. Concerned with national security and easily swayed by propaganda, they have traditionally voted for the conservative party, who tend to politicize and amplify tensions with North Korea.

While the two candidates were neck to neck in the presidential match, the young voters were the ones who cast the decisive votes for Yoon. This was also the first presidential election since the National Assembly passed the electoral reform bill lowering the eligible voting age from 19 to 18, giving more weight to the ballot of the younger generation.

Young voters in their twenties and thirties depart from traditional voting practices such as regional allegiance, and are less concerned with North and South Korean relations. While they have tended to vote progressively in the past, securing a high share of votes for the Democratic Party, they are now considered “swing voters”. Faced with unemployment, rocketing housing prices, and a widening income gap, their general frustration has been directed toward the ruling political party and President Moon’s administration. Less concerned about social welfare or the political standings of individual candidates, South Korea’s new generation is plagued by an increasingly self-seeking mindset of opportunism.

The New Generation’s schematic notion of politics is further exemplified in the role of gender divide, which has been the decisive factor in their voting decision. In fact, the conservative PPP strategically took on an anti-feminist stance to garner votes from young male voters. In particular, Yoon attributed the country’s low birth rate to feminism and advocated for the abolishment of the gender equality ministry on the grounds that it overstated women’s rights and was “no longer necessary”. He also promised to strengthen punishments for false accusations of sexual violence, which young Korean males spotlight as a point of discussion for disproportionate gender rights.

The People Power Party and Yoon’s politicisation of anti-feminism is likely to fuel greater gender divide and further encourage the misogynistic sentiment that has been burgeoning on online forums. Radicalisation of young Korean males is an ongoing phenomenon, and Yoon’s political rhetoric will serve to normalize the anti-feminist movement.

Yoon’s five-year term, starting this May, also means a regression to former hostile relations with North Korea, effectively undoing the progress President Moon has made toward diplomatic relations with its neighbour. Indeed, Yoon has promised to increase trilateral security with the US and Japan, with his main foreign policy being the enhancement of the US-ROK alliance.

Yoon’s presidency most definitely means that any small chances of prosecution reforms are now also gone. Moon has made every attempt to overhaul the Prosecutor’s office and decentralize power, but the former Prosecutor General Yoon has actively resisted these reforms. The Prosecutor’s office has been at the forefront of politically-motivated investigations targeting former presidents and government officials for “political retribution”. These investigations have been highly partisan, and in a number of cases, led to unwarranted allegations that have even resulted in the suicide of former Democratic President Roh Moo-hyun.

While Yoon holds office, and while the nation’s parochial views on politics hold sway, it seems that South Korea’s long overdue steps toward democratic reform and regional peace will remain unresolved.