Postcards from Dixieland: Republican Racists and the Election Season 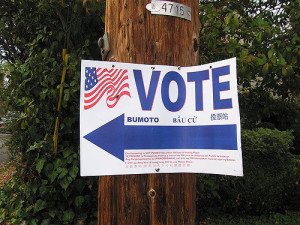 In some ways it’s good that we’re getting the Trump out of our system. The constipated racism that was slowly being digested into Republican politics is finally emerging into a single enormous, if not somewhat orange turd. When Trump inevitably becomes the new face of the GOP, the Republican mask of good ol’ boy politeness will give way to the leathery orange peel they de

serve. It will, one can only hope, be harder for racist public officials to hide behind the shield of conservative politics when Trump becomes the standard for conservative morality. The party is being turned inside-out, and who better to accomplish it than a man who looks like he’s been pickled. But until November, we must all put up with the covert racism that has long been a staple of the Republican right. And what’s a better example than the disenfranchisement of minority voters.

In 2013, the Supreme Court knocked down Section 4 of the 1965 Voting Rights Act, eliminating the formula that determined which states were responsible for getting federal preclearance on new voter ID laws, and essentially giving all state legislatures free reign on implementing those laws. The Supreme Court said in its decision that Congress could draft a new formula for identifying which states needed such vetting, but in a Republican controlled House of Representatives this was not bound to happen, and didn’t.

Every election season, be it congressional, presidential, or state, the Republicans look for ways to disqualify the minority voters who vote overwhelmingly Democrat. The preferred tactic, ever since public intimidation and lynch mobs went out of style, has been to cry voter fraud and institute voter ID laws that work primarily to disqualify poor blacks and other minorities who struggle to get the required pieces of identification. An estimated 218,000 registered voters in today’s North Carolina primary are ineligible to vote because of the latest feat by state election officials. Primary voters in Florida and Ohio face similarly strict restrictions. According to MSNBC, “North Carolina’s restrictive voting law was passed in 2013 after the Supreme Court weakened the Voting Rights Act.” North Carolina also has the strictest felon disenfranchisement law which, in our society’s prison-industry designed to target African Americans, means 1 in 5 blacks will be prevented from voting.

But as technology improves so too does the creativity of our racist politicians. The Interstate Crosscheck Program – launched in 27 states by mostly Republican officials – is a database that claims to match names, social security numbers, driver’s licenses, and a host of other personal features in order to determine voter fraud between states. It has generated nearly 7 million names, and after a long time of withholding the lists three states relented and released theirs. Turns out that despite claims to the opposite, having the same first and last name as someone else in America is often enough to bring you under this kind of “criminal investigation”. According to Greg Palast for Al Jazeera America, 1 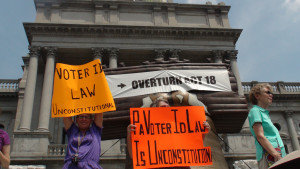 in 7 African Americans in these states turn up on the lists, compared to 1 in 8 Asians Americans, 1 in 8 for other minorities, and 1 in 11 for whites. When its hundreds of thousands of people in each state, those ratios make all the difference. Crosscheck advises states to send out postcards to people whose names appear on the lists verifying their name and address, postcards which look like junk mail and, if left unreturned, disqualify that person’s vote.

As Palast points out again in a follow up blog post on his website, voter fraud is a federal crime with up to 10 years of prison time attached to it. If people were really being suspected of voter fraud, they would be prosecuted, not sent a junk postcard that disqualifies their vote and apparently counts as a sufficient end to any kind of investigation.

Between 2002 and 2005 there were a total of 26 indictments of voter fraud in a federal election, out of 197 million votes. Jason Snead at the Heritage Foundation argues for an increase in voting regulation in an article that entitled “There Are Nearly 300 Cases of Voter Fraud in America”, in which he describes “cultures of voter fraud” among elected officials. In a country that employs such systems as Crosscheck, which has the potential to invalidate millions of votes, it’s unsettling to discover that some people have been wooed by the voter fraud squawking of the undercover racists in Congress and elsewhere. A few public officials stuffing their own ballot boxes somehow seems less worrisome than Johnny Reb getting his way on election day.

So in some ways, the crazies are right when they say that Trump is a “breath of fresh air” in American politics. No more pathetic Republican secrecy. Crosscheck will be silly and superfluous to a Trump presidency; if you want to hang out at the ballot box with a shotgun, go for it. Hell, he might even pay your legal fees.