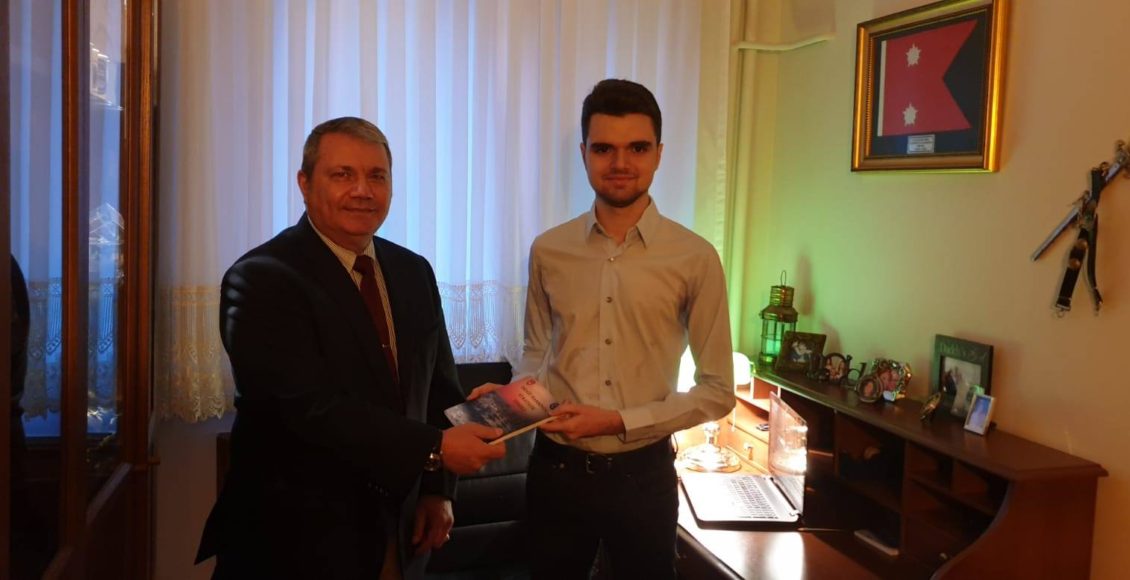 In the last two decades, there have been discoveries of oil and natural gas in the Eastern Mediterranean. These resources are crucial as most of the states in the region are energy importers. The states in the area, especially Turkey and Greece, had disagreements on their maritime borders and continental shelves in the past. Now they cannot agree on the question of who owns these resources and who can prospect for and extract them. Turkey and the Libyan Government of National Accord (GNA) have recently signed a treaty on the question of their national economic zones. Greece is not happy with the treaty and has gone as far as expelling the GNA’s ambassador.

I had the privilege of asking Dr. Bulent Şenses some questions regarding the current situation in the Eastern Mediterranean and Turkey’s position in these events. Dr. Şenses is a retired Captain of the Turkish Navy with an extensive history of service in the Eastern Mediterranean and the Aegean as Commanding Officer of TCG SALIHREIS and later as a frigate Commodore. He retired from the navy in 2012 and now teaches Naval Strategy in the Turkish Naval War College and in the Political Science Department and Marine School in Girne American University. He was able to provide valuable insight into the Turkish position on this multifaceted and complex issue. I would also like to thank my colleague Danae Derou for contributing with her questions.
This interview took place on 22 December 2019. It was conducted partially in English and partially in Turkish, and has been transcribed, translated, and edited lightly for length and clarity.

Fikret Oktay: Could you explain to our readers the current situation in the Eastern Mediterranean?
Dr. Şenses: There are plenty of powers in the region and I can easily say that there is a great risk of war in this region but nobody knows if this war is going to be a limited war or unlimited war. So, actually even if this unlimited war risk exists, this a great advantage for the peace environment because there is no dominant power as was before. The risk of unlimited war keeps everybody from pulling the trigger in the region. So actually the risk of huge war is a great advantage for the world. On the other hand that region is just in the middle of everything which means it is right after the Suez and right at the gate of Aegean Sea, which the Russian Federation and Black Sea states use a lot. It is true that pulling the trigger in the region easily has an impact on an unlimited war between Greece and Turkey. This is obvious. And you cannot limit a war to the sea if there is an unbalanced situation between two countries which have a common border on land. So, as I said before, this risk of unlimited war prevents sides from making limited naval war in the region.

FO: So the risk of catastrophic war actually prevents war?
Dr. Şenses: Perfect. So this is the case because, as the realist would say: there are two reasons that create peace. If there’s a dominant power in the area that creates peace, and if there’s a balance of weapons that also creates peace. Today in the Eastern Mediterranean none of this exists. Turkey is wary of creating problems there because there are already problems with other neighbours, and having yet another problem holds down our prosperity. On the other hand, the geopolitics in the region creates another peace enforcement instrument because of the existence of the Suez Channel. Any war in the region stops sea trafficking, and this means a huge economic risk for the world.

FO: What about the energy resources? There is a debate between Turkey, Greece, and Turkish and Greek Cyprus about energy resources, especially natural gas in the Mediterranean. Why are these resources so crucial to the countries in the area?
Dr. Şenses: You ask about Turkey, Greece and Greek Cyprus. However, one of the most important actors, if you are talking about gas, is the Russian Federation (RF). You know why? The RF transfers more than half of its gas resources to the EU. They make a lot of money. This is a great weapon for the RF and they don’t want to lose their position but so far they have kept their silence as they have enough problems in Syria. However I’m sure they are watching the region sharply and I’m very confident that Mr. Putin is asking his men every day about what’s going on in the Aegean.

FO: Could you please explain to us the policy of Turkey and the Turkish Republic of Northern Cypress (TRNC) on these new energy resources in the Eastern Mediterranean that both the Turks and the Greeks are claiming?
Dr. Şenses: It is simple. Greece claims that the gas in the region totally belongs to them. But, Turkey has the longest coastline in the region. According to the UN agreements, this geographic situation gives Turkey the greatest continental shelf in the region. However Greek Cyprus is accepted by the UN as the only state on the island. So, depending on this political reality they also claim some rights. With all these geopolitical realities, I can say that the resources can be shared by the actors in the region. There is enough for everybody.
Greece might have been encouraged by the fact that Turkey is distracted and its relationship with the US, RF and EU is tense. But they disregarded the fact that Turkey can now produce its own firepower.
The guided Harpoon missile for example is a classic, just like Exojet. Today Turkey has managed to create its own guided missile and it is reminiscent of the Harpoon. This is a miracle. We construct our own submarines and frigates, our helos. We are not the same as in the 1970s.

FO: As you know Turkey has signed an agreement with the UN recognized government of Libya about the maritime border. This is a question from our Greek writer. She asks if the Turkish position is ignoring the Cretan shelf when determining the border which is right next to Crete? (Greece argues that Crete has a continental shelf and it should have rights to resources on it, Turkey disputes this.)

Dr. Şenses: Greeks’ main argument in this issue is about some Greek islands near Turkish mainland like Meis (Kastellorizo) Island. It is claimed by Greeks that these islands limit the continental shelf of Turkey. By their logic, it is impossible for Turkey to make a continental shelf agreement with Libya. However, according to the UN Convention on the Law of the Seas (UNCLOS) and International Court of Justice, which has 6 or 7 rulings on the issue, there can be no continental shelf of the islands which are on the opposite side of the middle line between two countries. What is an island on the opposite side of the middle line? Imagine we have a middle line between us, and your island is on my side of the line. These islands only have territorial waters. Concerning the agreement we have made with Libya, the biggest advantage of the Libyan Government of National Accord is international recognition. So this agreement gives enormous power to Turkey. According to UNCLOS two sovereign states can determine their continental shelves independently and can sign bilateral treaties as Turkey and Libya have done. The Turkish Parliament has ratified the treaty and has notified the UN of this fact. The whole procedure is going according to the book. This ratified agreement makes Greece a third party to a legitimate agreement between Turkey and Libya, but they ignore this. They are making this mistake now, again. To sum it up, Crete is an island on the opposite side of the middle line. On top of this, it is an island belonging to a 3rd party. So they have nothing to do but accept. If they believed they were right they would have already taken the matter to the ICJ.

FO: I think they are considering it.
Dr. Şenses: When they consider a little more they will decide not to. We all see this. Do they believe that we haven’t read UNCLOS just because we haven’t signed it? I wish there was an agreement. Let’s extract these resources together, there is enough for all of us. We just want our rights. And we can use our pipelines to send it to Europe. Russia has Europe trapped in what I call chains of energy. As Marx says in his manifesto, break your chains. Russia has you in chains. Let Turkey help you.
When it comes to its relations with Libya, Turkey is on the legitimized side. When we look at geopolitics the Government of National Accords (GNA) political reach is largely confined to areas near the capital. However, the rest of Libya, which is controlled by Hafter, is desert, so what would one gain from controlling those areas? In the small area the GNA controls, the density of population is greater. Will Turkey send troops there? Turkey is already sending unmanned aerial vehicles (UAVs) there, armed and unarmed. I am saying this with great certainty and satisfaction as I look in from the outside as you do. We have become one of the best UAV manufacturers around the globe and we use them well. The greatest advantage of globalization for smaller powers was the fact that they now have access to the same information pool as the great powers. Will this situation (in the eastern Mediterranean) lead to armed conflict? As previously stated the lack of a dominant power gradually increases the risk of conflict. If a conflict is harmful to the interests of the dominant power then this situation brings peace. Now, will this business spill over to the Aegean Sea…

FO: Before we get to the Aegean, I would like to ask you about Israel. Israel is very involved in the situation and it supports Greece. Furthermore, the Eastern Mediterranean Gas Forum has been established and it has members such as Egypt but it excludes Turkey. We see Israel taking a position on these issues as well. What do you think of this?
Dr. Şenses: Israel seems to be the party which has taken the most concrete steps to date. In 2009-10, it made significant inroads in drilling for natural gas in two separate sites and is now exploiting one of the sites to extract natural gas very effectively. From what we can tell from open sources, these two sites account for 60% of Israeli electricity production. This is a concrete political success. The only party which now can exploit the energy resources in the region without a security problem is Israel. But Israel now also wants to export this natural gas. It has two options if it wishes to sell its natural gas to Europe, either use existing Turkish pipelines or construct a new one. Currently it can do neither as it is not feasible. It is working together with Egypt; Israel should pray in thanks for Anwar Sadat as if he hadn’t been an architect of the Arab-Israeli peace this current advantage would be unimaginable. Now, Israel wants to export more than it consumes. It needs a way out. It has some political initiatives to this end. This is the main reason for Israeli involvement.