Terrorism in the Election Season 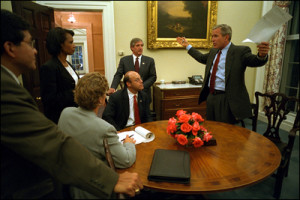 Days after Bush’s reelection in his 2004 race against John Kerry, philosopher Todd May wrote an article chronicling the “politics of fear” that had emanated from the administration during it’s first four years. “Note, among other shifts,” he says, “how the term liberalism has migrated from being a insult that has primarily to do with spending to becoming one that has more to do with being soft on the Other.” The Other, a term borrowed casually from Nietzsche, is in this case the post-9/11 terrorist threat, which has take precedence over, without erasing, the old threats of homosexuality and feminism that were and remain anathema to the religious right.

Today this increase in Republican fear mongering has been redoubled to the point of insanity, and is before our eyes effecting the implosion of the GOP. To imagine that Trump is the total and sole and embodiment of this vision, however, is to ignore his opponent; to ignore the mad religious fear that has become so much a part of Republican strategy. “The two Republicans who were equally unacceptable at the start of the race are even more unacceptable now,” said a recent article in the Nation. Ted Cruz has, for those who have lost sight of him through the fog of Trump coverage, kept a kind of pace with Trump, calling on law enforcement to “patrol and secure Muslim neighbourhoods before they become radicalized.” Trump is only the culmination of certain recent fears, an appendage who, contrary to all claims, owes his support to the bible-clutching bloodlust inspired by the Republican establishment.

The idea that this process is fuelled by our WWE-style news media will surprise very few, but a recent article traces our fear of terrorism back to its roots in the sensationalized crime coverage of the 80’s and 90’s. At the same time that Hilary Clinton was talking about bringing black “super predators” to heel, the nightly news was flooded with accounts of cozy suburbs being terrorized by encroachments from the inner city.
That was back when Democracts, too, were less interested in flashing the diversity of their constituencies.

“To believe in democracy is to embrace the crowd,” says an article from today’s New York Times. “From the Lincoln-Douglas debates, to Woodrow Wilson’s barnstorming on behalf of the League of Nations, to Harry S. Truman’s whistle-stop campaign by rail, our leaders have usually addressed the crowd in a way that assumes its decency and intelligence.” Trump, on the other hand, takes advantage of the fact that, as the same article says, “The mob is latent in the crowd.” The mobs at Trump rallies are not new, they are the latest boiling over of a very ancient pot. 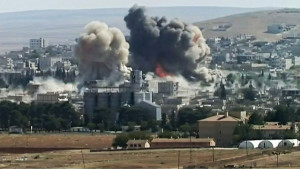 In 2004, Todd May pointed to hope as the answer to the distressing prospect of four more years of fear. Perhaps it was fitting that “hope” and “change” were the campaign slogans of the succeeding president. But now it seems that fear has found its perfect mortal embodiment in our pulpy new candidate Donald Trump. Indeed we should, if we believe ourselves to have any kind of obligation to the human species, combat the forces of ISIS, al Queda, al Shabab, Boko Haram, as we should dictators like al Assad and Kim Jong-un. But as it stands, terror is for most people a one-dimensional call to arms, inspiring a thoughtless, armchair hatred rather than the requisite solidarity with the real, daily victims of terrorism – the people being held captive in Raqqa, or the Yazidi sex slaves, or the people in Chibok, Nigeria, where Boko Haram kidnapped nearly 300 girls two years ago. Theirs are fears that the childlike expressions of our politicians could never come close to. The present display of American decadence and stupidity is for this reason even more grotesque than we are laughingly willing to admit.