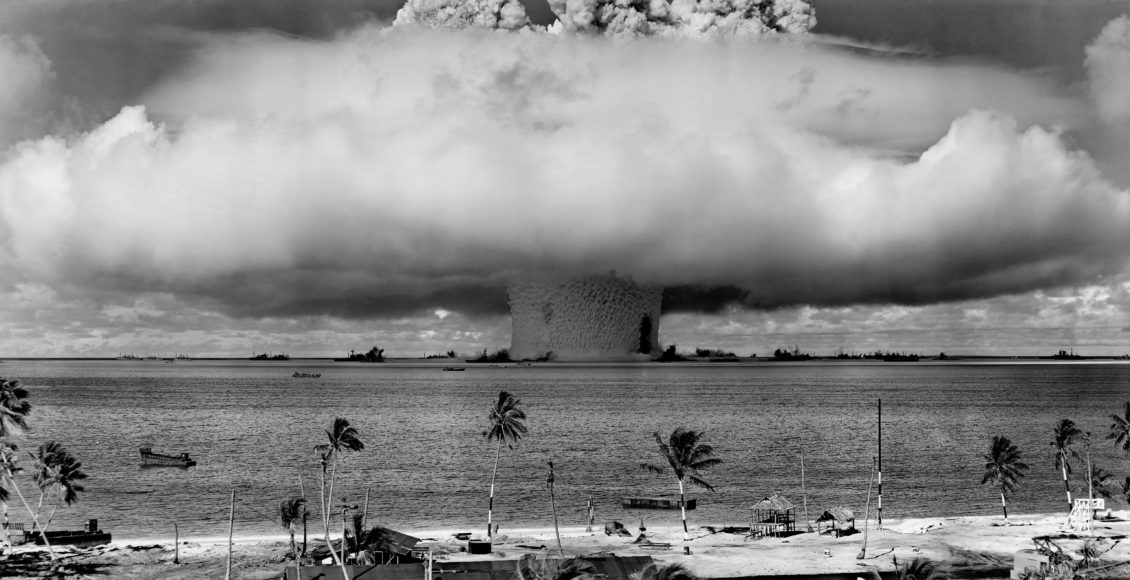 From the end of the Second World War to the end of the Soviet Union, the world was thrown into a seemingly endless conflict known as the Cold War. Known as a period of “geopolitical tension” this era consisted of regional proxy wars fought between two nuclear powers, the United States and the Soviet Union. Not just after but during World War II, the two allies and soon to be rivals began to turn on each other.

By the time the war ended, the frenemies held heightened suspicions of intentions considering they were the only two states holding onto any form of power after the chaos cultivated by Nazi Germany. The battle between democratic capitalism and socialist communism had begun and nukes were the preferred means to compete for dominance. The Cold War ended with the fall of the Soviet Union after Mikhail Gorbachev’s resignation in 1991. Now, as US President Donald Trump withdraws from the Intermediate Range Nuclear Forces (INF) Treaty, some argue a new age of nuclear warfare will be upon us. The Cold War may have ended, but winter is coming.

Authoritarianism , nuclear weapons, and the battle for international hegemony remain prevalent in Russia after 28 years of supposed defeat. Ideological battles aside, the fight for global power and status is what remains persistent. In tracing Russian activities from the supposed end of the Cold War too today, the situation becomes infinitely more convoluted. The idea that the Cold War was in hibernation is supplemented by frosty US-Russian relations. Yet, President Trump’s frequent flirtations with Vladimir Putin bring some to believe there is a lot more to it than meets the eye. As the frenemies fight for global recognition in an increasingly de-polarized world, a dormant nuclear arms race is reignited.

The Cold War era was first and foremost an ideological battle between two global superpowers trying to push their universalist models forth as the system for human society as a whole. Democratic capitalism encompassed the ideals of Western states and was enforced overseas while socialism and communism ran rampant throughout the Eastern Bloc and anywhere else the Soviets could take hold. Each ideologically set in their ways, the main competition was for the top spot of global hegemon. After WWII, it became clear the United Kingdom was no longer the central force of Western civilization. The US and the Soviet Union emerged as the saviours of the second world war. The only states with enough economic and social capital needed to stand in place of the UK and acquiesce nuclear weapons. Now armed with nuclear capital, the blizzard of battles around the world began.

The risk associated with nuclear weapons led to regional proxy wars.  Fearing post-nuclear destruction as seen in Japan, the battle was brought elsewhere as both states realized their nuclear power may lead to their own demise. To ensure domestic security not only were conflicts fought as ‘proxies’ on other territories but also, rapid growth of nuclear arsenals and pre-programmed launch locations guarantee the end of all in case of a nuclear attack.  Mutually assured destruction (MAD) posited nuclear warfare to be the guaranteed end of the world. To protect themselves, they armed themselves while simultaneously placing a target on their own backs.

The INF treaty was thus, signed in 1987 by President Ronald Reagan and Secretary General Mikhail Gorbachev. By eliminating land-based ballistic and cruise missiles and launchers ranging from 500 to 1000 km and 1000 to 5500 km, supposedly over 2000 missiles were discarded by the end of the war. The geo-strategic treaty limited missile range to eliminate possible attacks on Europe but now mid-range missiles launched by the US or Russia can fly over the area endangering the EU amongst others. Despite ten years of approved verification inspections, today, Russian non-compliance has led to the US withdrawal from the treaty.

President Donald Trump’s decision to withdraw is based on proof of Russian non-compliance. He notes how these violations of the treaty leave the US bound and disadvantaged in comparison. The testing of SSC-8 cruise missile in 2008, and 2014 was condemned by the Obama administration.  Lack of action led to continuity in Russian action culminating in the 2016 ground-launch of the cruise missile. Trump withdrew per the terms of the treaty as each side can withdraw with 60 days of notice if  “extraordinary events related to the subject matter … have jeopardized its supreme interests.” But was this the right move?

President Trump’s treaty withdrawal has been received both positively and negatively. Many agreed this treaty was limiting the US’ capabilities and enhancing the Russians’. The EU and NATO both agree the violations exist, but remain uncertain over decisions to disengage from the agreement. Now, rather than Russia pushing boundaries, they have free range to create, test and launch exactly what was condemned in the treaty. Trump gifted Putin “the easy way out” and Russia is no longer constrained nor condemned internationally considering the US is pulling the plug. Whether this play was a gift to Putin or an assertion of the US’ strategic advantage, both are now free to reengage in the proliferation of weapons of mass destruction. Critics find Trump’s engagement in a new arms race as a risk to national security for not only the US, but the EU and other allies. In reality, whether or not he enhanced or degraded state security, it is US vulnerability that he aims to protect.

Anxieties are heightened amongst civilians and political leaders as the world is not ready to fear for their lives in event of full-scale nuclear conflict. What lacks debate is not the end of the Cold War but the steady hibernation of the arms race. The INF treaty came about during the end of the Cold War era as each superpower increasingly realized the danger behind nuclear capabilities. The domino effect led to regional rivals seeking security. In these cases, security became more of an issue as more was at stake in event of conflict. To avoid lower and unstable powers from escalating into full-scale nuclear warfare, non-proliferation and ending nuclear acquisition became the theme of the second half of the Cold War era.

Currently, both Russia and China are engaged in proliferation of missiles, warheads, and launchers. Treaties that exist are either violated or annulled and the arms race that began ages ago continues. The US decision to withdraw may protect it’s interests, but it also may result in insecure states scrambling to acquire nuclear protection in an openly nuclear international arena. What is further frightening is the attempted exchange of nuclear technology sans a nuclear agreement, contracted by the US for Saudi Arabia. Ironically enough, the current US administration is no longer worried about weaponry in the wrong hands. The hypocrisy is clear in comparison to Iran, Saudi Arabia’s notable regional rival. Iran has been frequently placed under US sanctions for nuclear ambitions both in the past and present. Again, we are left questioning not just the administration’s actions, but their intentions.

The most significant difference in our modern age is the newfound multipolar nature of our global system. With US hegemony declining by the minute, there are multiple players that can claim the top spot. This is no longer a superpower rivalry of two states battling for ideology and hegemony. Power-hungry states such as China, Turkey, Saudi Arabia and of course Russia, are incentivized to stake their claim in this free for all. Nuclear capabilities ultimately increase their potential to stake a claim on the international sphere the US used to dominate.

Theoretically, it has been noted; once nuclear, one cannot go back. No state would completely eradicate their nuclear arsenal once acquired. So, treaties were enacted to ensure unstable and low power states would never possess nuclear capabilities in fear of the human devastation entailed. As role models, the US and Russia were to follow suit. But how many of these states actually ended their pursuit? Evidently, Russia did not. Perhaps the US did not considering their contract with the Crown Prince of Saudi Arabia or their recent antagonistic mid-range nuclear approach to China. Nuclear warfare places politicians in precarious situations as their desire for safety leads to the mutually destructive stakes raising, endangering national security. In our current climate, the cold has clearly returned, and conflict continues. In guaranteeing our present-day ease, nuclear weapons ensure uncertainty in our future.