The Combustion of the Republican Party…Don’t Get Too Excited 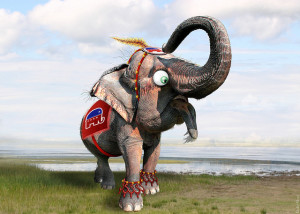 The horror show this year has made one thing absolutely clear: there is anti-establishment anger on both ends of politics. Liberals and conservatives alike have realized the extent to which their parties have been diluted by corporate interest. Voters for Bernie Sanders have felt temporary relief from their growing despair in an election cycle governed by SuperPAC’s, rallying around a candidate with a platform of comprehensive opposition to money in politics

. Donald Trump, on the other hand, presents himself as the would-be patron of his Republican opponents, as the businessman who has had his fun playing puppeteer in politics and has decided instead to play king.

The only, and I mean only, similarity between these two candidates is their opposition to the status quo political operation. In Sanders’s case it is a specific and intelligible platform, aimed first and most importantly at fixing the election system, at repealing the Citizens United Supreme Court decision which cleared room for corporate sponsorship of candidates. The huge support for Sanders’s run is a development in the political atmosphere that the Democratic Party is unprepared for, an uneasiness best embodied by Hilary Clinton and her flailing responses to Sanders’s attacks on her Wall Street donations.

Trump’s damage to the Republican Party, however, will be far more gruesome. With promises as vague as they are horrifying, Trump has merged the same anti-establishment fury with the so-far-untapped racism of a huge chunk of Republican constituents. A recent article in The Atlantic described the Republican Party as “so powerfully committed to ideas that it can no longer recognize that those ideas have ceased to resonate beyond its own shrinking coteries of activists and intellectuals”. The invention of the Tea Party was a similar effort by the Koch brothers to collate the same fury into a pro-Koch Industries political agenda. Tea Party pundits like Glenn Beck and Sarah Palin have been pronouncing their hatred for the Republican establishment long before Obama’s birth certificate was even a glint in Donald Trump’s eye. 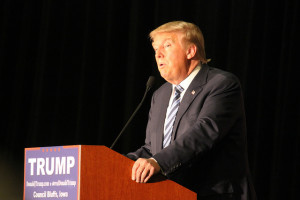 hat fires on all cylinders. Trump has read the exit polls. He knows that about a third of his constituents will say on paper that they think whites are a superior race (although, to be fair, some are “unsure”, still mulling it over). He knows about the near 20 percent who disagree with Lincoln’s decision to free the slaves. That’s why he seemed to have so much trouble disavowing the endorsement from David Duke, former grand wizard of the Ku Klux Klan.

Republicans for the last half-century have made meager concessions to the racists in their constituency on whom they have relied to get elected. Trump is pulling back the curtains, gutting the Grand Old Party like a fish and greedily and publicly slurping up the entrails. And he’s winning.