The Corporate Colleges that are Coming 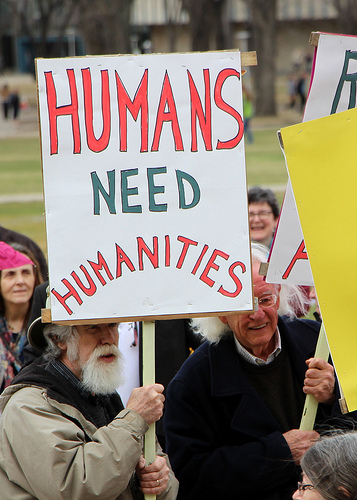 The benefits of the corporatised university go to two groups of people: high level administrators and corporate investors. Professors, whether full time or adjunct, are overworked and underpaid, and students are made to pick up the tab for administrative salaries and for the now and again maintenance of such excesses as the philosophy department. Private interest has more and more become the controlling force behind administrative decision making, and has left educators scrambling to pick up the pieces.

The reliance on corporate partners hits hardest in the humanities, for their failure to deliver up profitable research. In 2014, University of Saskatchewan administrators introduced the TransformUS program 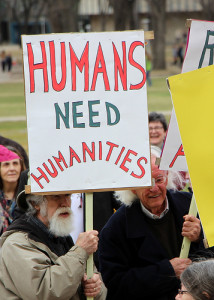 , presented as a series of structural changes to departments that would simultaneously save money and encourage new research. In one of its cruder aspects, TransformUS determined that the departments of philosophy, modern languages, gender studies, religion, and culture could be combined into a single behemoth. Behemoth, however, is a misleading word, since the obvious purpose of this maneuver was to shrink the combined staff of these departments down to the size of a more usual, scrawny humanities department and pave over the differences. One can only hope they would have afforded these jammed together faculties a dignified acronym of their names.

The good news is that TransformUS was canceled. “You can’t be everything to everybody, but you can have a number of small, excellent programs. Don’t let money be the primary driver of what you do,” said Doug Chivers, the head of the faculty association which strongly opposed the program. The main reason for the programs failure, however, was a ‘sudden change of heart’ by administrators, inspired by the public controversy set off when they fired Robert Buckingham. Buckingham, the executive director of the school of Public Health, was fired for publishing a letter criticizing the program, which would have dissolved his seven-year-old program back into the medical school. This letter violated the confidentiality clause in his contract, which prevented him from criticizing the school administration. He was reinstated a year later as a result of the public outcry, and the university president was fired.

But successes like these are defensive victories, combating a long trend towards entirely profit-oriented universities that will not be turned incrementally. Last year, graduate student-T.A.s at the University of Missouri staged a walkout over administrative cuts to their healthcare plans. The cuts were erased, and the students took up their jobs again, but that was only one problem staved off in the face of many more. In Wisconsin, governor Scott Walker has been made notorious for what may be unironically called a war against public education. In one measure, he doubled the minimum health insurance premiums for T.A.’s. That’s not school policy, its state legislation – which can’t be overridden even by the university. But Walker’s real centerpiece was the decision to cut $250 million from the annual budget to the University of Wisconsin, money which must then be made up for by corporate investment.

There is no future for the humanities in North America if they are going to be expected to make a profit for Marlboro and McDonalds. The abundance of administrators is only a symptom of the private influence that has been let into universities by public neglect. The real problem is the draught of public funds that has left our schools exposed. A renewal of public investment in secondary education is the only thing that can drive out the $400,000 a year chancellors, and save the English departments of the future from transforming into conveyor belt jobs training programs.