The Everlasting Fight for Democracy in Nicaragua 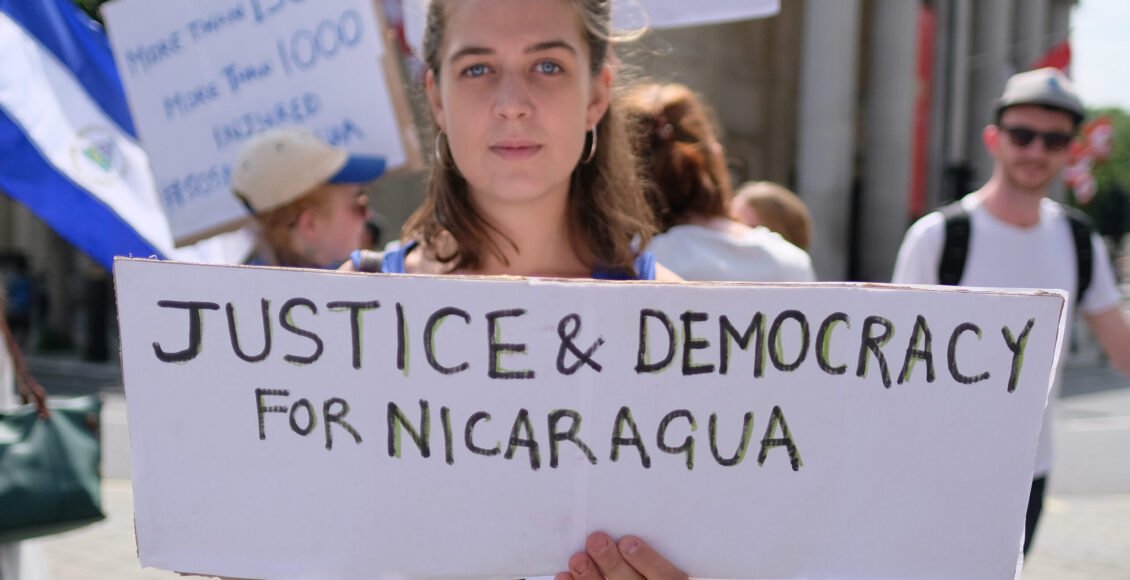 The rule of law has deteriorated in Nicaragua. Over the last three years, human rights abuses and the deaths of hundreds of protesters have revealed the repressive nature of the Ortega regime. Indeed, while the country is ostensibly a democracy, Nicaragua’s ambassador to the Organization of American States has referred to its government as a “dictatorship.” Nicaragua has historically faced many setbacks in its democratization process. The oppressive actions of President Daniel Ortega and Vice President Rosario Murillo (Ortega’s wife) have shown Nicaraguans that their government has no commitment to freedom and democracy. If change occurs, Nicaraguans will have to confront the dictatorial husband-and-wife team that has taken over their institutions and civil society.

After fighting to obtain its independence from Spain in the mid-19th century, Nicaragua struggled against repeated US interventions. In 1934, this led to the rise of the infamous Somoza regime, which ruled Nicaragua for the next thirty-three years. Suffering from high levels of corruption and political repression, Nicaraguan society formed a united front against Somoza’s oppressive regime after the assassination of journalist Pedro Joaquin Chamorro in 1978.

The subsequent revolution, led by the Marxist-inspired Sandinista National Liberation Front (FSLN), overthrew the Somoza dictatorship in 1979 at the cost of more than thirty thousand lives. The FSLN subsequently appointed Daniel Ortega to lead the country. In 1984, this choice was democratically legitimized by the Nicaraguan people through a free and fair election. However, the revolution’s success did not end Nicaragua’s problems. Throughout the 1980s, the United States covertly backed the right-wing Contras in a bloody civil war against the FLSN government. The successful transfer of power to Violeta Chamorro after the 1990 election (as well as the end of the Contra war) led to hopes of a peaceful and democratic Nicaragua. There were improvements in the postwar era. The country developed an independent legislative system, depoliticized its security forces, and strengthened its civil society. However, after Ortega regained the presidency in 2007, he proceeded to erode these democratic institutions.

Until 2016, Ortega’s administration economically benefited most Nicaraguans. Venezuelan President Chávez largely financed Nicaragua’s government through Venezuela’s oil revenues. President Ortega and his inner circle allocated some of these oil funds to social policies benefiting the poor population (especially those who had pledged allegiance to the FSLN). The improved economic situation for Nicaraguans undoubtedly helped Ortega win reelection in 2011 and 2016. However, support for the Sandinistas began to wane during Ortega’s 2016 mandate as Venezuelan funds gradually dried up. This raises the question: how did Ortega win reelection in 2021 despite his dwindling popularity? The answer lies in the erosion of Nicaragua’s democratic institutions and Ortega’s willingness to resort to authoritarianism to stay in power.

The former revolutionary first undermined democratic checks and balances by co-opting institutions. Indeed, Ortega appointed loyal figures or members of his inner circle to key political roles in the FLSN to manage the opposition. Not only did he nominate his wife, Rosario Murillo, as his vice-president in the 2016 election, but he also appointed Sandinista party loyalists in the Attorney General’s office. Institutional checks on presidential power have been further undermined as Ortega stacked the Electoral Council with his supporters, effectively allowing him to bar opposition political parties. Ortega also appointed his godfather, Raphael Solis, as head of the Supreme Court.

The weakening of social institutions also makes it difficult to argue that the 2021 elections were fully democratic. The press and opposition have been actively harassed and intimidated since 2018. Furthermore, many NGOs have been shut down by the government, preventing them from fulfilling the vital role of organizing citizens around issues. In 2018, Nicaragua’s Congress removed nine NGOs from legal registration. Ahead of the 2021 elections, the regime went even further, using laws to establish its authority over civil society and the media. The first controversial law to be passed was the foreign agents’ law. This law requires Nicaraguans working for foreign organizations to register as “foreign agents.” Those designated foreign agents cannot run for office and are barred from intervening in “issues, activities or matters of internal or external politics.” The second controversial law to pass in October 2020 was a cyber crimes law that facilitates human rights violations through its vague and ambiguous wording. Under this law, authorities can criminally sentence anyone disseminating information they deem to be ‘fake.’

The Turn to Dictatorship

Today, Nicaragua is not a democracy. The 2021 elections were not free and fair as government actions, including the imprisonment of opposition party candidates, “removed all credible competition from the presidential election.” The country’s democracy has long been eroding, but its fall into authoritarianism came after the 2018 protests’ repression led to human rights violations, with 350 people losing their lives. Ironically, the oppressive regime of Ortega (a former revolutionary) has become reminiscent of the tyranny of Somoza. Under Ortega, opponents are jailed. Private universities holding as the last centres of resistance are being shut down or “stripped of their ability to operate independently.” Students are also hunted, imprisoned, and tortured by the government. The Catholic clergy that provided the root for the Sandinista revolution’s success is now being attacked by Ortega’s followers because it opposes the repressive methods of the president. The presence of armed motorcycle paramilitary groups (allegedly brought in by the government) only worsens the terror that reigns during the demonstrations.

A positive message out of this authoritarian resurgence and attacks on the freedom of its citizens may be that democracy in Nicaragua remains in people’s hearts and cries. For nearly four years, Nicaraguans have been rising against the grip of the repressive regime. Students keep finding new ways to make their voices count as the government crushes democratic channels. As the country is now considered Not Free by Freedom House, exiles form the broad resistance base. More than 100,000 Nicaraguans have gone into exile to escape oppression. Among them, activists continue to fight for accountability. The human rights defence group “Collective of Human Rights Defenders: Nicaragua, Never Again,” based in Costa Rica, documents the injustices and abuses of the Ortega regime and works to raise victims’ voices. While the picture is bleak, Nicaraguans continue to fight against the Ortega regime, and their repeated cries have reached the international community. On the 7th of March 2022, the UN High Commissioner for Human Rights asked Ortega for a “credible, fair and transparent electoral process” as municipal elections are scheduled for the end of the year. Nicaraguans’ fight for democracy and justice has become increasingly international, and its efforts do not appear to be slowing anytime soon.

Featured image: “Justice & Democracy for Nicaragua” protesters mobilized in Britain against opposition to the autocratic rule of Ortega, by Alisdare Hickson. Licensed under CC BY-SA 2.0.