The Fracture to Come in German Politics 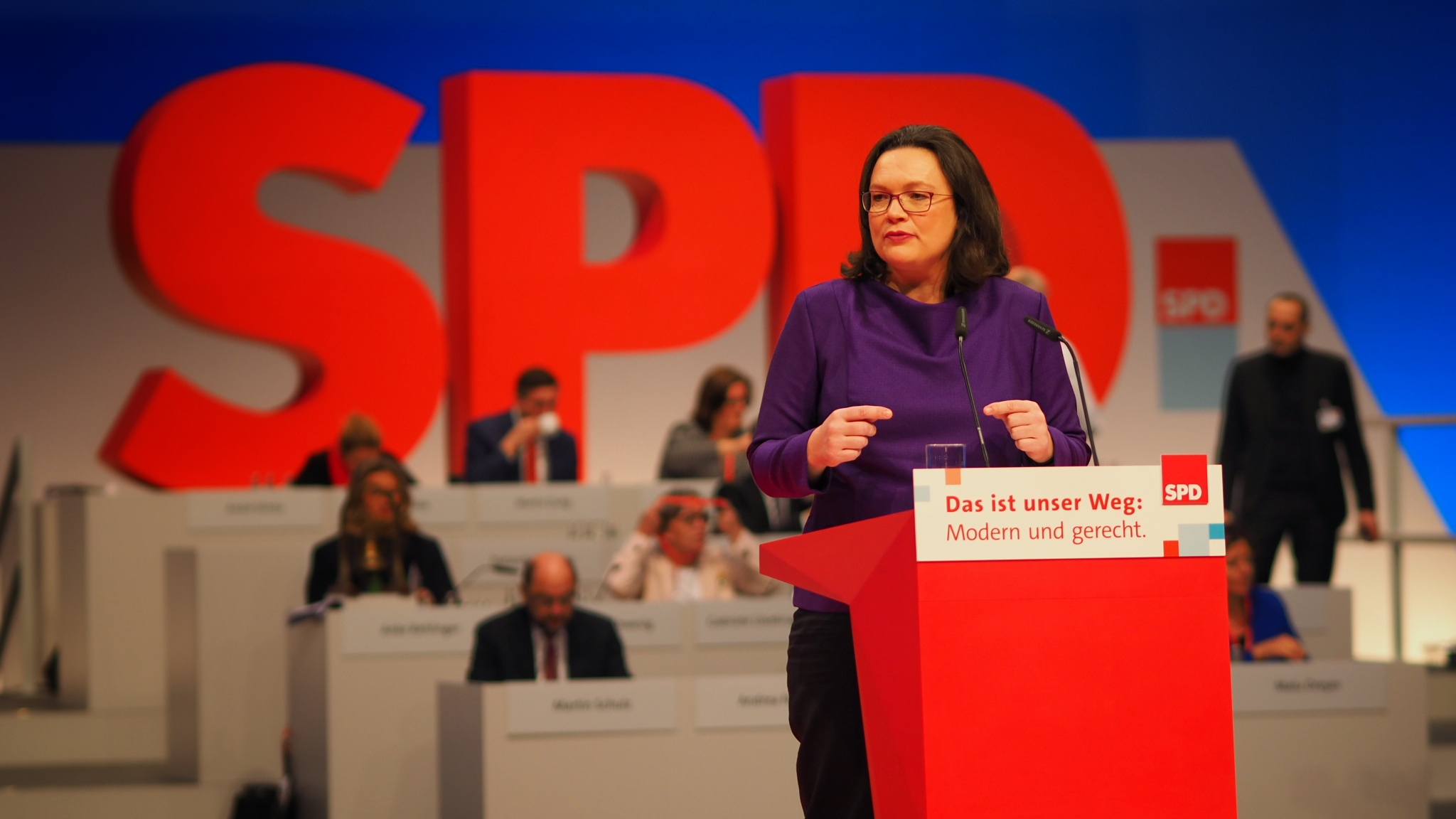 German politics generally have a reputation for being boring, and few German politicians exemplify this better than Angela Merkel. Through her twelve years as Chancellor, she has moved her Christian Democratic Union (CDU) from being a conservative party to one of the pragmatic centre and has attempted to systematically wipe away any trace of ideological competition by enacting whatever policy has had broad support, even if was of socialist or green origin. Three of her four governments have been “grand coalitions” involving the centre-left Social Democrats, leaving little effective opposition.

For a while, the strategy seemed to work; Germany weathered the financial crisis with little hardship or instability, there was very little “anti-system” sentiment, and her CDU fell only five seats short of an absolute majority in 2013. But with her unilateral and unpopular decision in 2015 to allow the resettling of 800,000 refugees, the consensus collapsed: last September’s federal election saw both major parties fall to historic lows, while the radical-right Alternative for Germany (AfD) entered parliament for the first time, as the third-largest party.

After six months of negotiations—during which media speculated breathlessly about her impending departure—another deal with the Social Democrats was hammered out. This coalition could hardly be considered “grand” (the two parties control only 56% of the seats) and leaves AfD as the largest opposition party.

Meanwhile, Germany’s southern neighbour has shown a different path. Last year, the Austrian conservatives scored a decisive victory in national elections, something that would have been unthinkable the previous year. This change in fortune was entirely due to its new leader, 31-year-old Foreign Minister Sebastian Kurz, who co-opted many of the radical-right’s talking points, then later formed a coalition with them. He effectively acquiesced to their demands on migration while neutralizing their authoritarian and eurosceptic tendencies.

There are signs that a similar “re-polarization” might take place in Germany. Many across the right seek to break from Merkel’s centrist course, while many in the left seek to escape her deadly embrace and re-establish a distinct identity. As a result, by the next elections in 2021, the country’s political landscape might look very different indeed.

All of Germany was astonished when Christian Lindner, the leader of the Free Democrats (FDP), stormed out of post-election negotiations and declared that it was “better not to govern than to govern badly.” The FDP was historically a pro-business party that formed alliances both with centre-left and centre-right, so its refusal to enter government came as a shock. It’s likely that Lindner, who at 39 is the youngest of the party leaders and the most likely to personify change, was jockeying for position. He recognized that there was a market of voters who opposed the Merkel coalition from the right but who were skeptical of the AfD. However, he also recognized that he would not be able to appeal to them if he were in her government. Indeed, some observers claim he is actively trying to follow in Kurz’s footsteps.

His decision to abandon negotiations earned him much criticism, but his electoral support has largely held. And now, his calls for tighter migration policies and lower taxes and his skepticism toward further European integration can be a rallying cry for disgruntled conservatives, instead of being watered down in a coalition agreement.

Meanwhile, the CDU’s Bavaria-specific “sister party,” the Christian Social Union (CSU), was nothing short of traumatized by the election results. Not only did the party itself fall to a record low of 39% in Bavaria, the AfD scored over 12%, violating a long-held adage within party ranks that “no party must exist to the right of the CSU.” For them, this was proof that the CSU had lost its conservative credentials.

In advance of state elections next year, the party appointed a new state premier unafraid to make culturally conservative appeals, then invited both Kurz and Viktor Orbán, Hungarian prime minister and notorious prosecutor of the anti-Islam culture war, to a party conference. The party played hardball during coalition negotiations with Merkel, demanding a hard limit on the number of admitted refugees and calling for corporate tax cuts. How much farther they are willing to go depends on how they see their prospects of retaining an absolute majority in the Bavarian parliament—their primary raison d’être as a party.

But whatever the CSU does, it only runs candidates in Bavaria, while the CDU competes in Germany’s other 15 states. This leaves the latter with an existential question: do they return to their roots as Germany’s conservative party? Or do they renounce this role entirely and leave it for other parties to fill—like Lindner’s FDP or like the Blue Party, which was recently started up by former AfD leader Frauke Petry in an attempt to create a “nationwide CSU”?

Jens Spahn, a 37-year-old, openly gay member of the CDU’s executive committee, chooses the former option. Despite a cosmopolitan image—he lives in a trendy neighbourhood in Berlin— he holds staunchly socially conservative views, including an opposition to dual-nationality, to the burka, and to Merkel’s refugee policy, and believes that Germany’s Leitkultur (“dominant culture”) should be asserted and taught in schools. That Spahn was present at Sebastian Kurz’s victory party gives a hint to his own future political strategy.

For years Merkel had attempted to sideline Spahn, but this year she was forced to appoint him Health Minister, reflecting both that she no longer has the ability to impose her views within her party and that Spahn’s ideas have a wide base of support. Indeed, Spahn is hardly an outlier within the party: Julia Klöckner, the new Agriculture Minister and another rising star, holds similar social views, while the leader of the party’s youth organization has explicitly called for a “Kurz-ian” shift to the right.

Meanwhile, acting as Merkel’s junior coalition partner for so long has decimated the Social Democrats (SPD): its vote share has collapsed from 34% in 2005 to 20.5% last fall. Many within the party suggest that only a shift to the left could give the party a distinct identity and bring disgruntled voters, many of whom now back the AfD, back to the fold. (60% of AfD voters claimed to have done so out of “disappointment” with other parties.)

The party’s acrimonious debate over whether to join another coalition has produced two clear camps: those against the coalition, led by the party’s left-leaning youth wing, and those in favour, led by former Labour Minister Andrea Nahles, herself considered a left-winger, whose appointment as parliamentary leader was thought to signal a shift in strategy.

In the end, of course, party delegates voted to join, and Nahles is expected to be appointed party leader next month. But the Left’s overall existential crisis is, if anything, getting worse, as some recent polls show the SPD slipping into third place. This, some say, necessitates drastic measures: members of the Social Democrats and the Left Party have recently proposed setting aside their historic rivalry and collaborating more closely. However, this proposal is far from being a consensus.

It is worth emphasizing that this picture is entirely speculative. The SPD might simply stay in the centre, wait for Merkel to leave, and hope that a young, charismatic, and compelling candidate could lead them to victory—it worked for Canada’s Liberals and New Zealand’s Labour, after all. Meanwhile, it is very possible, if not likely, that the CDU decides that its current position as the commander of the centre is too good to give up. Merkel herself is, of course, still in charge and entertains no ideas of changing course. Recently, she appointed Annegret Kramp-Karrenbauer as party secretary and policy chief, a move many interpret as appointing a successor. Were the 55-year-old Kramp-Karrenbauer —already dubbed “mini-Merkel”— to become Chancellor, she would likely stay the centrist course, with her support of Merkel’s refugee policy and inclinations to economic intervention.

But German voters seem tired of a landscape in which the CDU is “alternativeless.” Already, 46% want Merkel to leave, while a clear majority was against another grand coalition. Furthermore, 43% do not think that Kramp-Karrenbauer would be a “good candidate for the chancellorship,” while 36% are in favour.

Polls also suggest that, were an election held today, CDU and SPD may not even have a majority between them. This suggests that grand coalitions cannot simply be extended indefinitely. German voters, then, seem to want politics with clearer alternatives, and the country’s seven parties seem happy to oblige; that is, with the exception of the Greens. In a recent party convention, centrist candidates won both Green leadership positions. It is possible, then, that in five years, the party with its roots in radical grassroots organizing ends up as the sole, lonely voice for moderation.