The Ghost of Henry Kissinger 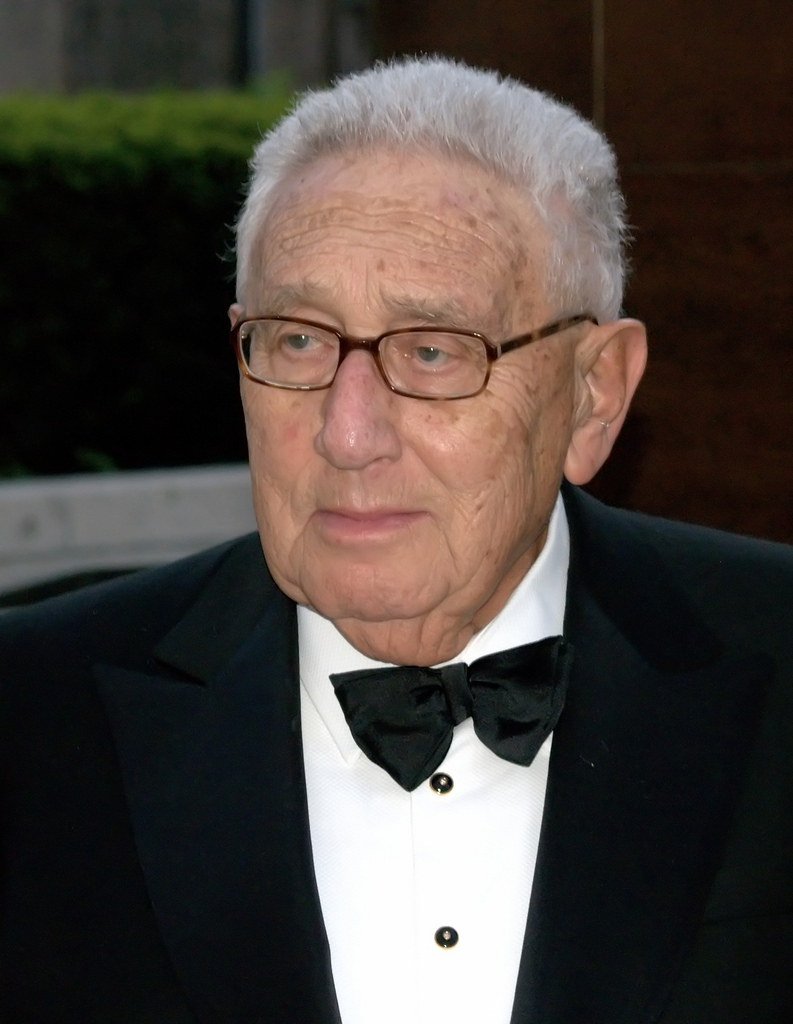 During last Thursday’s Democratic debate in Milwaukee, the two candidates briefly descended into an argument over a man who seems to cast shadows on all corners of global politics: Henry Kissinger. After pointing out Clinton’s friendship and history of consultation with Kissinger, who is best known as Nixon’s former National Security Advisor, Bernie Sanders went on to summarize Kissinger’s depraved and illegal bombing campaigns in Cambodia during the Vietnam War (“anything that flies on anything that moves”). The bombings, said Sanders, led Cambodia to fall into the hands of Pol Pot and the Khmer Rouge, who would go on to kill some 3 million Cambodians. “Count me in as somebody who will not be listening to Henry Kissinger,” he ended.

“I listen to a wide variety of 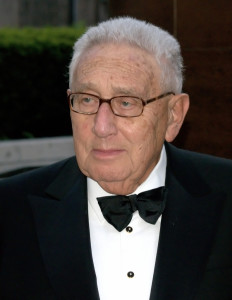 voices,” Clinton announced in response, as if admitting that she takes foreign policy advice from a diverse group of spirits passing through the night, “His opening up China, and his ongoing relationships with the leaders of China, is an incredibly useful relationship for the United States of America.” Sanders threw her a look of disgust.

In December of 1970 Pakistan held its first democratic election in a decade. The winner was Sheik Mujibur Rahman of Bangladesh, which was still a province of Pakistan at the time. In March of the following year, the outgoing military government led by General Yahya Khan kidnapped Rahman and set about committing a genocide of as many as 3 million people. In April, Yahya Khan received a letter from Nixon’s National Security Advisor Henry Kissinger thanking him for his “delicacy and tact”. This was after the U.S. consulate in the country had begged Kissinger to condemn the atrocities and to cut off ties with Pakistan, ties which included, among other things, weapons assistance programs. This episode is well outlined, along with all the rest of Kissinger’s crimes, in Christopher Hitchens’s book The Trial of Henry Kissinger, according to which the U.S. turned a blind eye on Bangladesh in order to convince China that America was capable of respecting their mutual ally Pakistan. “Henry Kissinger, as I’ve just pointed out to you, thought 3 million Bengalis was a small price to pay for a picture of him making nice with Mao Tse-tung,” Hitchens said in a later speech.

The National Security Archive has published a trove of declassified documents showing Nixon and Kissinger’s efforts to get a visit to China. In May of 1971 the two were sending messages back and forth with Yahya Khan, who set up Kissinger’s secret visit at the end of that year, during which plans were then made for Nixon’s famous visit in the spring of 1972. The door to China was held open by a mass murderer who was in the midst of committing a genocide, but Kissinger never flinched.

In my last article I spent some time criticizing Op-ed columnist David Brooks, and I’m happy to announce that I’ll be doing so again. Laughing at Sanders’s remarks during the debate Brooks threw up his hands during the PBS post-debate coverage and said that he was fourteen the last time Kissinger was in office. “On Henry Kissinger,” Mark Shields responded, “it was Cambodia, it was the Khmer Rouge, and 3-and-a-half million people being slaughtered.”

“And Jefferson was fighting on the shores of Tripoli!” Brooks exclaimed with a smile, alluding to the first Barbary War in the early 19th Century (some kind of a joke I suppose), “It was a long time ago.”

Kissinger’s supporters chalk his crimes up to an Otto von Bismark-style realpolitik, and others, as Brooks demonstrates, don’t see the contemporary relevance of the 92 year old’s career in public office. But the man continues to haunt the U.S., as will his awful legacy. Besides his eternal role as the guest of honour at every charity and award dinner in Washington D.C. for the last 40 years, his reputation as a foreign policy guru has made him into a regular consultant and news pundit, and even had him acting as an advisor to the second Bush administration on its policy in Iraq. 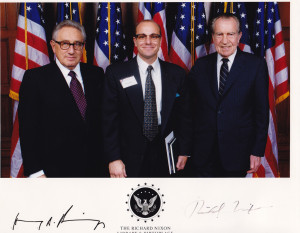 His crimes in Chile, East Timor, Indochina, and many other places, should have had him sent to prison by now. Indeed a Spanish Judge tried and failed to do just that when, in 2011, he issued a court order to have Kissinger brought in for questioning about the assassination of the democratically elected Chilean president Salvador Allende, and his subsequent involvement with the Pinochet regime.

Kissinger is the last, disgusting vestige of one of the the vilest presidential administrations in U.S. history. But Nixon resigned, and Attorney General John Mitchell went to prison, whereas Kissinger settled for a Nobel Peace Prize, and will most likely be enshrined as a great American statesman. So forgive me for gagging when Hillary Clinton says, with the vagueness of a distant supernova, that she counts Henry Kissinger among the many transient “voices” to which she defers.