In the oft-forgotten 1993 hit The Good Son, Macaulay Culkin stars as Henry Evans, a bright-eyed 12-year-old evildoer prone to torturing animals, orchestrating highway pileups, and luring his younger sister out onto to thin ice. In the end (spoiler alert), he and his not-at-all-evil cousin are caught dangling off the edge of a cliff and his mother, who has just caught wind of his murderous streak, is forced to choose which boy to save. Realizing this, Henry pleads for his life, sprinkling in some of that Home Alone innocence that everyone knew and loved.

Skip to 2009. Around this time Macaulay Culkin was hibernating somewhere in New York, maybe painting his way out of a weed-coma. Across the continent, Governor-from-the-future Arnold Schwarzenegger was giving a speech to promote new legislation to reroute water from California’s Bay-Delta estuary to the Westlands Water District. His audience was a crowd of farmers bussed in from the Westlands district, representing the Latino Water Coalition. Turns out, the Latino Water Coalition was formed by Schwarzenegger himself and a group of agribusiness executives, to disguise the interests of mega-farms as those of Latino farm workers. Since 2009 the Westlands Water District, the biggest in the state, has procured an enormous and permanent yearly amount of California’s depleting water supply. 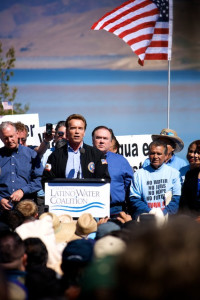 A small group of farm-owners have benefited from these legislative victories, while the county in which they are situated remains one of the poorest in the country. The district’s lobbying expenses have spiked, beginning in 2009, and it has just this last month developed a new campaign, “El Agua es Asunto de Todos” (Water is Everybody’s Business), funded by the same farming corporations but designed once more to appear as a grassroots effort led by Latino farmworkers. “What the coalition does is classic astroturfing,” said Dan Bacher in his article exposing Schwarzenegger’s involvement.

Astroturfing is the process by which a corporation secretly advertises its interests by creating and funding a front group. These groups are designed to seem like the stirrings of a social movement – humanitarian, grassroots, and/or anti-establishment, appealing to people in the ways that a profit-based company can’t. “It looks like a movement, smells like a movement, but isn’t exactly a movement,” said researcher and professor Brayden King in an interview. In the era of mass online sharing, governed by BuzzFeed listicles and brief viral content, this stuff sticks. And assuming no one digs too deep, it isn’t hard for an organization like the Latino Water Coalition to woo people.

And it is by no means rare, although some attempts are subtler than others. An investigation into an apparently independent blog called Working Families for Walmart revealed it to be run by Walmart’s hired public relations firm. I wish I could provide the link, but once these things are loudly and publicly exposed, they tend to lose all value, and the firm took it down. Ask.com did a similar kind of thing when it launched an anonymous ad campaign pretending to start an “information revolution” against Google, putting up unmarked ads in the London Underground.

Such small efforts seem harmless enough, even ridiculous. But these phony campaigns have the potential to undermine, or even co-opt, legitimate challenges to the status quo. “If you don’t know whether the activist you’re dealing with is sincere” said King, “it decreases the trust we tend to have in grassroots activism.” Such confusion seems to be prime real estate for corporations and their hired prospectors. On top of this, allowing corporations to attach themselves to preexisting movements – which, King notes, we increasingly expect them to do – has the potential to at least partially morph national organizations like Black Lives Matter into representatives of corporate interests.

After 30 seconds of staring down at her son, who is ever so lovingly appealing to her for help, Henry’s mom lets him fall onto the rocks below and uses the extra hand to hoist up his cousin, who is not a murderous psychopath.  So the next time you’re at a rally for the Westlands Water District, or a sit-in for the Information Revolution, or whatever it may be, take a look around.  And if the guy with the megaphone leading protestors off of a bus forgot to take off his Walmart cufflinks, let the kid splat.