The Losing Battle of Collective Action Against COVID-19 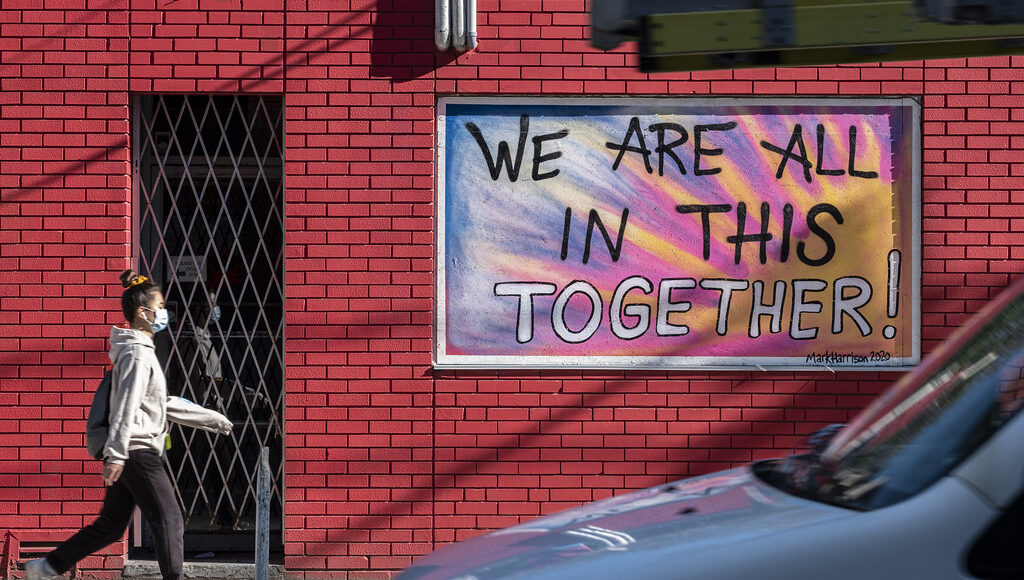 During this pandemic, Prime Minister Justin Trudeau’s multiple warnings about the dangers of complacency and reminders of personal responsibility were critical first steps in encouraging a united public response. However, in the face of an increasingly severe crisis, these messages are weak stand-ins for an effective federal response. Canada reported roughly 1,700 new cases daily in the first wave in April 2020. After some relief during the summer, the figure climbed back up, higher than before, hitting 2,200 cases per day by October. The federal response to both waves was inadequate and weak-willed; this had everything to do with the government passing responsibility to provincial health authorities to curb contagion and its over-reliance on voluntary public action.

So far, Canada has not been issuing restrictions or emergency responses at the federal level. Provincial governments have been at the apex of public health decisions since the declaration of the pandemic. There are many possible reasons for the federal government’s reluctance to impose a national emergency response. First, the severity of the pandemic differs drastically across provinces, spanning across the large country. Responses necessary for the severely hit regions could be inappropriate for the Northern territories or Atlantic Canada. Second, some premiers do not wish to be micromanaged and may be recalcitrant towards cooperation with the federal government. Earlier in November 2020, Ontario premier Doug Ford voiced this hesitancy and responded negatively to questions on the possibility of increased federal intervention: “That just won’t fly… that’s not their jurisdiction. We don’t need the nanny state telling us what to do.” Many of the premiers who outright reject the possibility of a national approach believe that the provinces have been doing the best possible job of implementing restrictions. 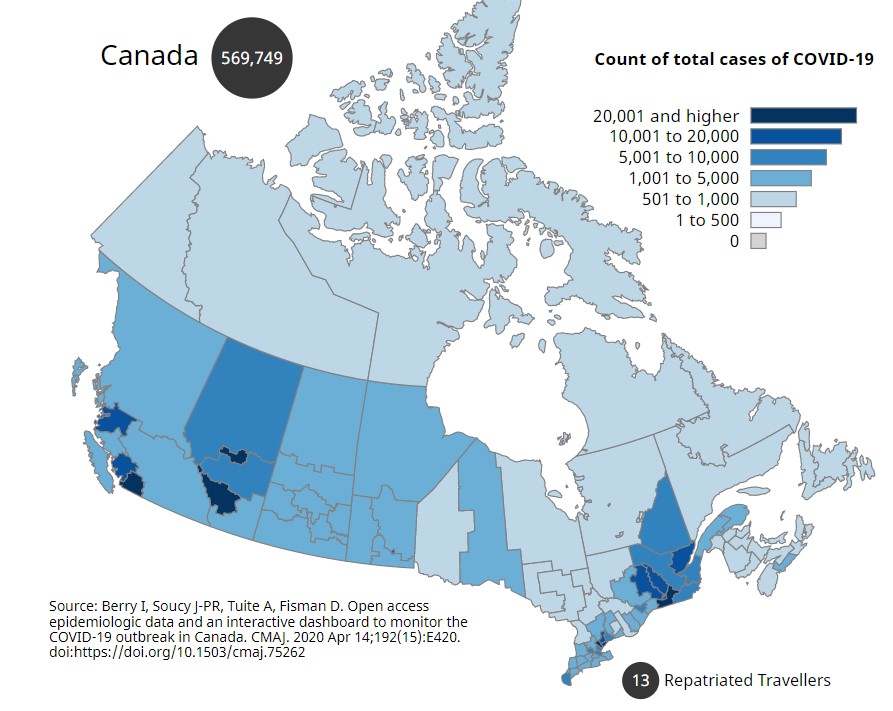 A choropleth map showing the count of total COVID-19 cases up until December 29, 2020. The figure, “Count of Total Cases of COVID-19,”  by the Public Health Agency of Canada (open access data from Berry, J-PR, Fisman) is public domain.

Indeed, regional differences and disagreements with premiers may have enfeebled the federal government enough to not commit to a national strategy; This choice came with drawbacks realized during the second wave. For instance, some provinces like Alberta were slower than Ontario and Quebec to control the mounting number of cases in November 2020. By early December, Alberta had the highest total active cases of COVID-19 and cases per capita. Just as the feds left responsibilities to provincial authorities, the Albertan government passed down key tasks further to municipal agencies and city councils. The situation continued to deteriorate, and at one point, Alberta Health Minister Tyler Shandro said that “if COVID-19 case numbers [didn’t] decrease by Dec[ember] 15, the government [would] explore further restrictions.” Yet, disunity persisted as the Calgary mayor Naheed Nenshi said they could not wait that long, and the Edmonton mayor Don Iveson was already considering bypassing provincial ministers.

When public health authority is passed down to lower levels of governance and leaders make their own decisions, it becomes harder to assimilate information, analyze outcomes and filter out the most effective strategies that would keep the entire Canadian population informed and safe. With each province taking its route, Canadian residents experienced confusion at every turn—those travelling inter or even intra-province had to inform themselves about local guidelines. While localizing the pandemic response might be a good way to reach communities, these efforts are futile when disconnected to a central goal of either significantly reducing cases or reaching “COVID zero” in Canada. Therefore, at times, it may be necessary for federal health authorities to invest in and commit to a strategy that would work across the heterogeneity of caseloads in the country.

The limits of collective action

Apart from public health restrictions, mitigating community transmission involves safety messaging and hoping that people will respond to the information appropriately by wearing masks and staying in dispersed social bubbles. This more passive approach is fascinating to discuss in Canada because Canadians are stereotypically identified as polite, cooperative, and willing to sacrifice for the greater good. Notably, Prime Minister Justin Trudeau used some of these stereotypes as a rhetorical advantage in his messages about collective awareness during the pandemic. One can observe this when reading into his Christmas message, where he asserts that “as Canadians, we show up for each other” and that “this crisis will end and as a country, we will come out of it stronger and more united.”

Thousands of Quebecers are protesting the province's mandatory mask regulation in Montreal. https://t.co/OKM7RmtbYc

The veracity of these stereotypes is subject to debate in the academic world. However, it is clear that these stereotypes, whether real or mythical, fail to bind Canadians together in the face of a health crisis. Indeed, many people have good intentions and wish not to be unfair to others, but it would be naive to expect everybody to have the same definition of “unfairness” in mind. For some, unfairness means knowingly acting as a vector for the virus and spreading it. In contrast, for others, it means allowing governments to have increasingly dictated how people should live their lives. The latter interpretation is at the heart of anti-mask, and anti-lockdown protesters in the country materialized in Quebec demonstrations demanding liberté and the “Walk for Freedom“ in Calgary. People weigh different priorities over others, resulting in streams of actions that do not point in the direction that health authorities had hoped.

Second, there are cognitive and sociological explanations for imperfect collective action during public crises. People with optimism bias tend to disregard the pandemic’s reality by believing that they are excluded from its negative effects. This bias, combined with echo-chambers of online misinformation, conspiracy theories, and the ambiguity of individual risks, bolsters pandemic denial. While this cognitive factor is arguably omnipresent, its drastic consequences are particularly impactful now that the war on an airborne virus requires nearly 100 per cent public buy-in vis-a-vis safety measures. Instead, many people do not have the incentives to help achieve such a feat, and assuming that they do is costing lives and the economy. Therefore, the federal government cannot afford to be passive at this time.

From the federal government’s perspective, both the delegation of responsibilities and reliance on public conscience were inadequate for controlling the novel coronavirus’s spread. A stronger-willed response would entail decisive and committed action at the federal level. Although the federal government was responsible for closing borders to non-essential travel as stipulated under the Quarantine Act, organizing COVID-19 aid packages, and securing healthcare equipment, their actions did not adequately target the problem of community transmission. Countries like Australia formed a national cabinet with premiers to coordinate strategies and mitigate community transmission, resulting in a success story in flattening their curve. Similarly, muscling up the courage to find and commit to a cohesive stream of actions at our federal level would help align Canadians’ viewpoints, mitigate the spread of misinformation, and ultimately lead to a lower case count. Helping provinces in need catch-up on contact tracing should also be a priority. Vaccine distribution offers hope this year, but the lack of a federal strategy was still a blunder in 2020 and should be re-considered in the face of upcoming waves of cases or future health crises.

Featured image “We Are All In This Together 1236“ by Timothy Neesam (GumshoePhotos) is licensed under CC BY-ND 2.0.