The Opposite of Poetry 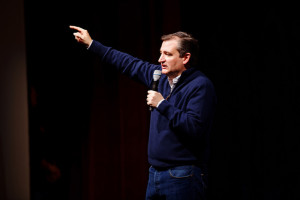 As many as 24 million people at once have tuned in live for the election debates this year, which have brought the attention of the public to the speaking skills of each competing candidate. Some of the candidates, like Marco Rubio, are rarely capable of elaborating on anything outside of their pre-prepared lists of things to say. Trump is called refreshing by his admirers, “a gust of fresh air, sweeping the tedious clichés and constant guilt-tripping of political correctness out to sea.” Trump doesn’t need a script because he holds himself accountable for so little informa

tion. His recent exchange with Ted Cruz over Trump’s healthcare plan is a particularly amusing example of this:

Cruz: “Did you say…if you don’t support socialized healthcare you have no heart? Did you say you’re a liberal on healthcare?”

(Brief obligatory argument between candidates as they take turns speaking)

Trump: “…We’re gonna have private healthcare, but I will not allow people to die on the sidewalks and streets of our country if I’m president. You may let it, and you may be fine with it, I’m not fine with it.”

The was followed by an interesting description of the way in which a Donald Trump administration would collect those people, treat them, and make some great deals on it.

Hillary Clinton is, in the eyes of Trump’s supporters, his robot antithesis. Far more fearsome than the boyish Rubio, she has long since abandoned any kind of list of policy points. Hers is a vocabulary of them. She isn’t scripted, she’s turned language into a script, with every answer a chain link of sentence-blocks that have lain dormant in her mind like hibernating bears, to be summoned out by the first light of spring and the pangs of hunger.

“That so much thinking happens in language means that we need to pay attention to the art of language and the language of power lest we fail to apprehend the circumstances we live in,” said Robert Wood in a recent article on the references to poetry in politics. The last American president to take a real interest in contemporary poetry was John F. Kennedy, who had long been in contact with Robert Frost, even before his presidential campaign, and invited Frost read aloud at his 1961 inauguration. Frost responded to the request with a telegraph, which read:

“If you can bear at your age the honor of being made President of the United States, I ought to be able at my age to bear the honor of taking some part in your inauguration. I may not be equal to it but I can accept it for my cause – the arts, poetry, now for the first time taken into the affairs of statesmen.”

Most politicians care little about the quality of their speech, much less about poetry, except to the degree that grammar can help them to get elected. Whether its Clinton’s mechanized sentences or Trump’s disintegrated grammar all political rhetoric is characterized by vague and overused euphemisms, designed to be as nonspecific and evasive as possible. It’s the opposite of poetry, language that says nothing.

Poor speech among politicians is hardly a new phenomenon. In 1742, philosopher David Hume published an essay “Of Eloquence”, criticizing the speaking skills of English politicians: 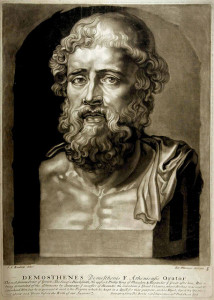 “Perhaps it may be acknowledged, that our modern customs, or our superior good sense, if you will, should make our orators more cautious and reserved than the ancient, in attempting to inflame the passions, or elevate the imagination of their audience: But, I see no reason, why it should make them despair absolutely of succeeding in that attempt. It should make them redouble their art, not abandon it entirely.”

We obviously can’t expect from our politicians the metaphorical heights of ancient Roman oration, but we should be holding them responsible for the “Make America Great Again” abstract sloganeering that seems more and more to be replacing any kind of coherent explanation of policy. As Wood put it, if we don’t pay attention to the rhetoric of our politicians, “we may stagnate in an unchanging scum of mediocrity, and in this case a conservative, militarized, outdated one.” Our politicians are not despairing for lack of poetry and style, they are actively searching for the deadest idiom, the broadest generalization in order to say as little as they can about the most complicated problems in the world.