The World’s Most Unbreathable City 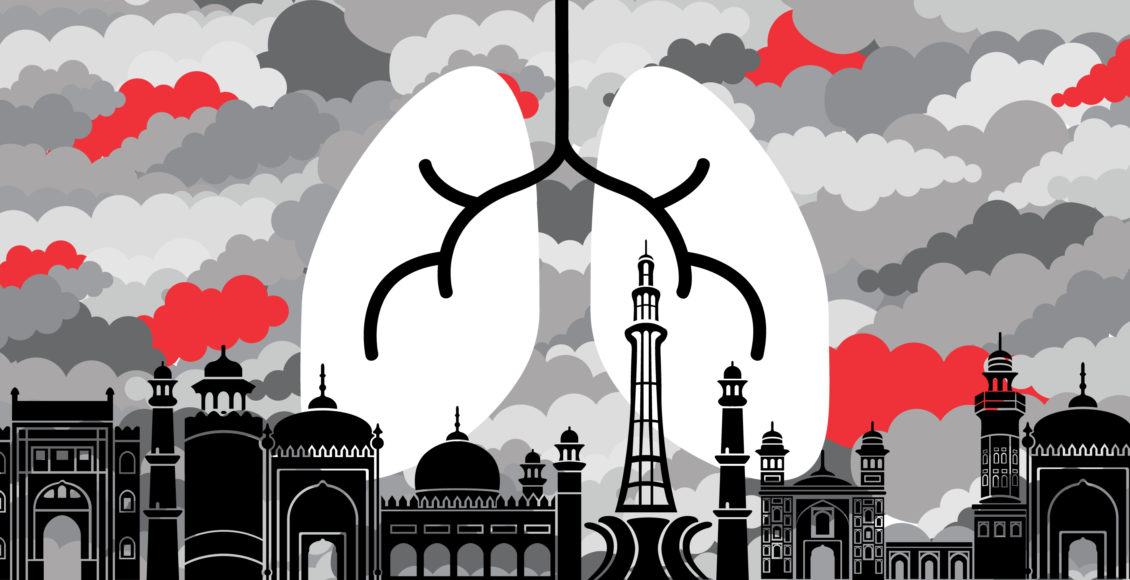 “One has not lived until they have seen Lahore” is a saying I’ve heard for as long as I can remember. Ironically, it has become increasingly difficult to actually see the city, as a near opaque blanket of smog descends across Punjab in the transition to the winter season. A breathtaking city, that quite literally has the power to take your breath away, is facing a crisis of air pollution that will ultimately affect not only the most vulnerable of its 10 million habitants but the long-term future of the country and environment.

This is not a unique problem to Lahore however, given that the air quality from Peshawar to Dhaka is some of the most toxic in the world. Last year, Pakistan ranked second-worst overall for air quality, and this year the statistics have fared no better. At the beginning of this month, the provincial government of Punjab was forced to shut down schools across the province as the Air Quality Index (AQI) of Lahore reached an epidemic level of 551. For context, any AQI over 300 is considered “hazardous” so one can reasonably assume that an AQI of nearly double that threshold warrants immediate and sweeping government action. Yet, besides shutting down schools for a total of three days this November, the state continues to neglect its responsibilities, let alone admit the severity of the problem nor the domestic factors that have contributed to it. This inertia prompted the remarkable activism of Laiba Siddiqi, Leila Alam, and Misahel Hayat—three high school-aged girls—to petition the Lahore High Courts to file suit against the Punjab government for the “violation of their fundamental right to a clean and healthy environment.”

Their petition has encouraged further dialogue on the current state of Pakistan’s faltering air quality and challenged the discourse many countries in the Global South face in the pursuit of industrialization in a world heading towards irreversible climate crisis. Girls like Laiba, Leila, and Misahel are just a few of the millions of children across South Asia whose health and future depend on the success of both state apparatuses and private corporations to address their complicity in rising pollution metrics. While these girls should be able to focus on their studies, like many young environmental activists, they are devoting their time and efforts to demand action from a state. Laiba Siddiqi actually started the process earlier this year by organizing a march against climate change in the city.

Their recent petition specifically targets the current standards used by the Meteorological Department stationed in Lahore. The standards used to classify levels of AQI feed into the government’s propensity to downplay the crisis. For example, while an AQI of 185 in Lahore is classified as “satisfactory”, China qualifies this as “moderately polluted”, and the developed nations of Singapore or the United States deem it as “unhealthy.” 13-year-old Alam states that because of this confusion she doesn’t know “when to wear a mask and when it is all right to go out without it”. However, masks and home air purifiers are certainly not sufficient placeholders for the systemic change that needs to occur, especially since knowledge about the effects of air pollution or access to these preventative measures cannot permeate through all strata of Lahori society.

While there are incredibly high rates of air pollution year-round, the smog season, which usually lasts from October until February, has become a highly anticipated annual phenomenon in Lahore—although it is important to note it is not just limited to the city centre. The smog season means more than just delayed flights and risky night road trips, although these are some of the most visible components of this issue. The term “smog” is the hybrid of smoke and fog, but what exactly does it mean in the context of Punjab? To go even further, what are the sources of the increasingly toxic air pollution and most importantly: what can we do about it?

When warmer air gets trapped between two layers of cold air it creates an inversion layer. This inversion cloud traps all air pollution in the areas it covers until it is either blown away or dissipated by rainfall. This trapped air pollution creates what is officially recognized as smog, and it is not as common as Lahoris might think. In reality, what is most likely the cause of the visibly thick haze that blankets the city day after day is the transition to colder temperatures. When cold air condenses, it makes the pollution that is already in the air even more visible, but this smoky haze is just as dangerous as smog. I remember waking up to crisp December mornings with the sun just barely peeking through a cloudy mist. While I could only see the beautiful and dreamy quality of this as a child, I now understand how harmful this air actually is.

Just because we cannot see air pollution as densely as we can during the smog season does not mean it isn’t there. The predominating narrative is that the poor air quality, particularly during the smog season, is the result of seasonal crop burnings on the Indian side of Punjab to Haryana state. While the ramifications of crop burnings across North India should not be underestimated, it is important to note how this has become a scapegoat for Pakistani government officials. Crop burning is a practice used by farmers to prepare their fields for the new growth cycle. Because agriculture across South Asia is capital-poor, these individuals are unable to afford alternative methods such as plow machines. While it is easy to abdicate state responsibility by falling back into nationalist rhetoric that faults India, we need to be willing to admit our own role in the problem.

A recent study by the Food and Agricultural Organization (FAO) of the UN found that rice residue burning by Pakistani Punjabi rice farmers are also linked to the formation of smog. Crop burnings take place on both sides of the border and depending on the meteorological and climatic conditions, they can indeed compound with other suspended pollutants in the air to create a dense and visible layer of smog. However, in order to consider the bigger picture, it is necessary to put crop burnings into perspective when regarding the different sources of Punjab’s air pollution.

In a joint study by the Punjab government’s Agriculture Department and the FAO, the 2018 R-Smog report fleshes out the main sectors contributing to air pollution emissions in the province. The report concluded that the transport sector is responsible for 43% of air pollutants. Transport, industry, and the power/energy sectors combine for a total of 80% of Punjab’s air pollution, while agriculture (i.e., crop burnings) only accounts for the remaining 20%. These results bring us back to the dichotomy of industrializing an economy while also working towards a pollution-free and cleaner future. Most automobiles, bikes, and machinery are powered by crude oil; in fact, the quality of diesel and fuel used in Pakistan is some of the dirtiest in the world. Furthermore, refineries within Pakistan and the petroleum industry have acted as a bulwark against reform due to short-term effects on profit and a lack of funds. The state’s infrastructure is fledgling, endemically corrupt, and facing severe economic constraints in its ability to implement effective policy.

Cleaning the air will be extremely costly in terms of time, effort, and money, but this doesn’t mean we should accept a lower standard of living. We have seen across the globe: how it is more than possible for suffocating cities to markedly improve their poor and dangerous air quality when they refuse to accept the alternative. For example, while the Chinese government does have a greater organizational capacity and access to funds than Pakistan, recent studies show how China’s comprehensive raft of air policies have already saved hundreds of thousands of lives.

You had 15 months to deal with this. There’s nothing ‘sudden’ about this environmental crisis that is violating people’s human rights to education, health and even life. #LahoreSmog https://t.co/IcG9iumHeF

To echo Omar Wariach, this is not a sudden crisis, but an ongoing issue that warrants serious action. While I recognize the constraints Pakistan faces in addressing air pollution, in addition to a slew of other developmental crises, admitting the extent of the issue is the crucial first step. Up until a few years ago, Lahore was the only city in the country with an air quality monitor, and even today there are only five air quality stations in Punjab. This is far from what is needed to properly monitor or give real-time updates and forecasts on air quality in the region.

I am not trying to lampoon the state of Pakistan either; we must discuss these critical issues without reframing the dialogue as an existential and unpatriotic threat. It is precisely because those like Laiba, Leila and Misahel love and care about our people that they are demanding better—because we all deserve at least that. I have been privileged to live and grow up in a place where the air is not slowly poisoning me, nor affecting my education, and I wish that those in my other home will soon be able to say the same. Power is concentrated in very few hands in Pakistan, and it’s time they started using it to realize a vision of a cleaner and more hopeful future—before it is too late.