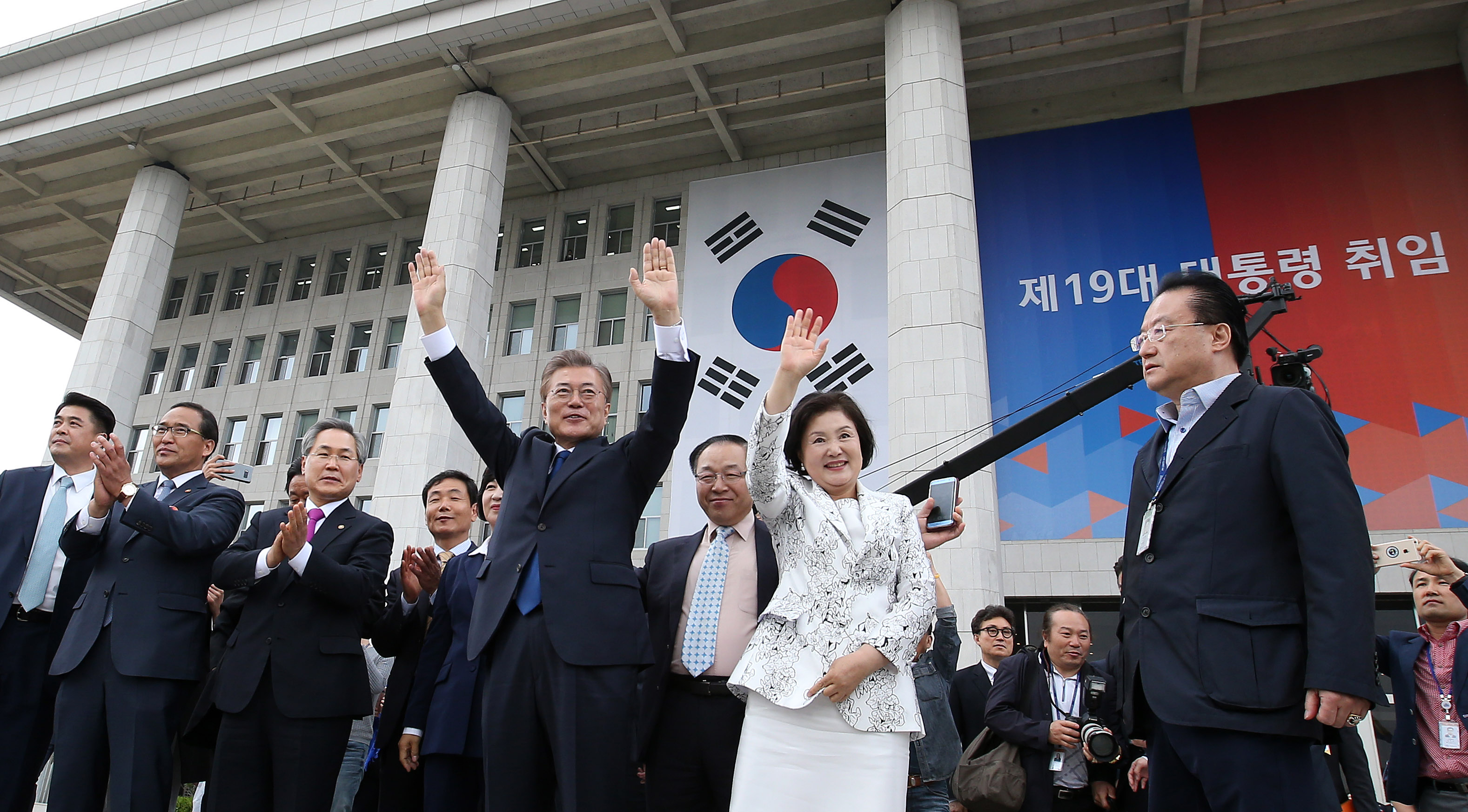 On May 9th, South Koreans elected Moon Jae-in, a liberal candidate, to succeed Park Geun-hye’s conservative government. This election was a significant turn away from what could have threatened South Korean democracy once again. For half a century now, South Koreans have fought continuously for their democratic rights and fair governance. With Park’s government accused of corruption, her last months in office left a bitter taste amongst South Koreans and while a peaceful democratic transition is underway, memories of her father’s dictatorship remain to this day.

Moon Jae-in, a former student activist and human rights lawyer, is hoping to turn a page in Korean politics by favoring closer relations with North Korea. His renewal of the Sunshine Policy is expected to soften ties between both countries, while also running the risk of creating a potential rift with the United States. Even though Moon is predicted to provide a clean break from governmental corruption, his election into office follows several weeks of ongoing protests regarding South Korea’s nuclear program and is proving to be a difficult start to his presidential term. When looking at South Korea’s rocky road to democracy, the question arises: Will Moon Jae-in be capable of solidifying democratic governance in his country while stabilizing the demands of his people and balancing the challenges of his two largest partners, China and the United States?

While Park Geun-hye’s impeachment and the public’s assertive pushback of corruption suggests democracy is well and healthy in South Korean politics, a quick look at their history tells us a very different story. In fact, the country’s democracy is quite frankly short-lived and fragile. Generations of South Koreans have fought to counter a continuously corrupt government and its clear violations of their democratic rights. With this year marking the 30th anniversary of the 1987 June revolution and the democratic constitution, a quick breakdown of South Korea’s fight for democracy is necessary to understand how Moon Jae-in’s candidacy is expected to heal the bruises of a population victim of government corruption.

Following the end of World War II and of the Japanese occupation, the Republic of Korea was proclaimed in 1948 and South Koreans elected their first President, Syngman Rhee. He led the country through the Korean War and the tensions of the Cold War. However, after emerging from both conflicts, poverty and ruin dominated South Korea and the country turned to the United States for economic and political support. With early intervention from the United States, many South Koreans looked up to American governance as a model for constitutional democracy. Consequently, when Syngman Rhee attempted to seize permanent power in 1960, the fight for a democratic government began. Backed up by the United States, South Koreans violently protested Rhee’s reelection and forced him to step down.

This opposition movement gave way to Park Chung-hee’s military coup and seize of power just one year later. Under his presidency, it was expected South Korea would greatly strengthen ties with the United States and move towards a greater democracy. It is also important to understand that many Koreans who backed the opposition movement viewed the United States as a friendly power that was supportive of their transition towards democracy.

By the late 1970s, constitutional changes had granted Park more power, and political freedom was yet again threatened. As his presidency grew highly unpopular, opposition movements gained traction throughout Korea, and Park was eventually assassinated in 1979. South Koreans were hopeful and looked forward to a new constitution, the end of a military rule, and, once again, the reinforcement of democratic values in their country alongside American support.

However, as the 1980s rolled around, the South Korean government underwent another coup by Chun Doo Hwan and military rule was maintained. As tensions between student protests and the new government grew, the American policy in Asia underwent significant changes. Following military defeat in Vietnam, the United States was desperate for stronger military cooperation with South Korea. Consequently, when protesters demanded American assistance in talks against the military ruling, the United States turned their back on South Korean citizens and instead ensured a forceful shutdown of their rebellion. This was a tremendous disappointment for South Korean workers and students who had modeled their democratic movement after American democracy.

Chun’s new regime further repressed democracy in South Korea and gave rise to strong opposing democratic movements in the 1980s. Coupled with the rise of these movements, anti-Americanism dominated much of their discourse. Out of distrust, the path to democracy was now shaped by a movement that would challenge military rule without relying on alliances with politicians. In 1987, after almost a decade of resistance against Chun Doo Hwan, significant changes were made to the South Korean constitution and a direct election was to take place. Shortly after, Roh Tae-Woo came to power with a liberal discourse that echoed strong anti-corruption sentiments across all government levels.

Discerning Park Geun-hye’s impeachment and Moon Jae-in’s election requires an understanding of the magnitude of the South Korean fight for democracy in the last 70 years. The corruption scandal that erupted around Park Geun-hye is not uncommon in South Korean politics. In fact, keeping in mind the country’s turbulent history with democracy, Park’s scandal is a little too familiar for many generations of South Korean families, who are determined to finally break away from deeply embedded government corruption. While a successful impeachment of Park Geun-hye represents a firm step towards a more democratic governance, it is not to say Moon Jae-in will simply become the face of a new era of democratic struggle.

It is also important to remember that these elections are taking place against the backdrop of increasing tensions between North Korea and the United States. Moon Jae-in, who has advocated for more open communication and negotiation with North Korea, has also become the voice of a president that is sensitive to his country’s history with the United States. While the development of democracy in South Korea is no longer seen as an opposing path to solidified relations with the United States, Moon Jae-in has taken a stern attitude towards American cooperation.

In fact, he has pledged to review Park Geun-hye’s decision to allow the United States to deploy the THAAD missile defense system in South Korea. Moreover, Moon Jae-in also wishes to adopt a proactive approach to North Korea, opposing greatly President Trump’s stance on the matter. The reimplementation of Kim Dae-jung’s Sunshine Policy, first proposed in 1998, would aspire to a peaceful co-existence of both countries rather than regime change. This stands in stark contrast with Trump’s more aggressive approach towards North Korea’s dictatorial regime.

While it is too soon to tell how South Korea’s relationship with the United States will evolve or how South Korea’s level of government corruption will change, Moon Jae-in’s presidency will definitely provide a fresh change to the country’s political landscape. In the hopes of nurturing a strong and stable democracy, Moon has built a program which not only prioritizes an improved relationship with North Korea but which is also attentive to the expectations of South Koreans. However, he will mostly need to demonstrate his capability to withstand opposing demands from his allies and increasing pressure from his voters, who are eager to witness the abolishment of all forms of corruption and finally experience a stable democracy.