Who gets to be a journalist? 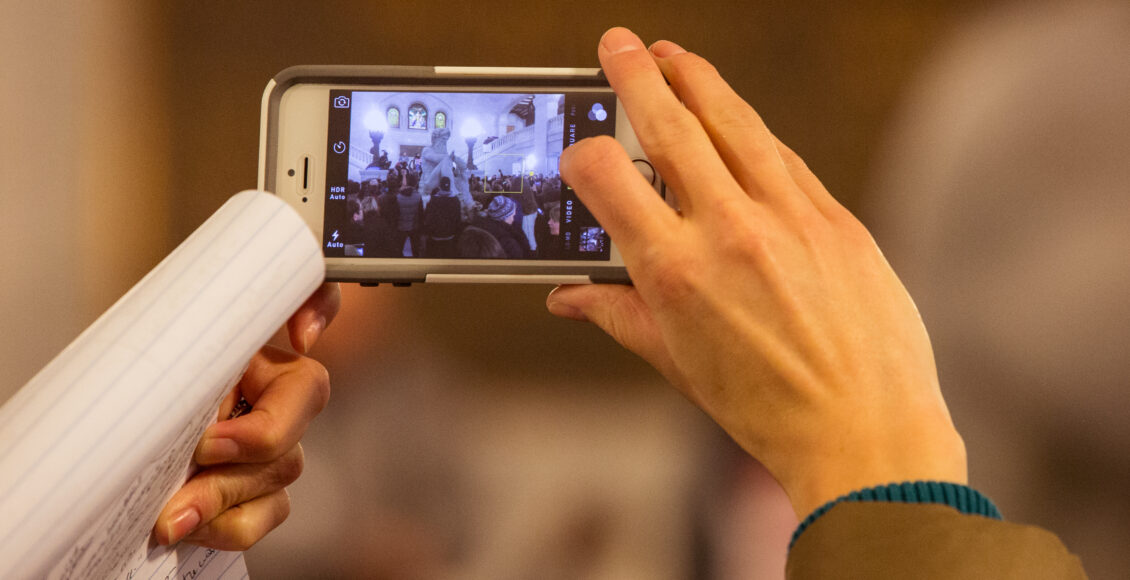 This is the first in a two-part series on protest journalism.

In December 2018, I found myself caught up in France’s gilets jaunes protests while on exchange in the country. Unlike the poor imitation we witnessed in Canada, this movement was driven by a popular rejection of austerity, growing wealth inequality, and the failings of neoliberal economic policies. Joining the protest, in my mind, would be an excellent opportunity to try my hand at grassroots citizen journalism.

I packed my camera, passport, and other personal belongings, and headed down to the Champs-Élysées. As quickly as the protesters began to march, dozens of police armoured vehicles came hurling down the boulevard. They soon began to coalesce around the marchers, forcing them down narrower and narrower streets. That’s when the police began to fire the tear gas — myself, protesters, professional journalists, and bystanders caught completely off-guard by the weapon. The police then encircled the block, advancing on and trapping those unlucky enough to remain at the scene. Any that remained surrounded by police without dispersing were subsequently arrested, without distinction between protester and journalist.

No excuses can be made for the police: this was a reckless use of state violence, antithetical to the democratic process. However, one could almost understand their “confusion”: with modern technology empowering anyone to be a content creator, the line between bystander, protester, and journalist is increasingly blurred. In fact, the relationship between the two has become increasingly symbiotic, with press and social media coverage lending to the success and mobilization efforts of social movements. As the bridge between those engaging in direct action and those supporting social justice movements from afar, sympathetic journalists play a crucial role in creating mass support.

As the twenty-first century has marched on, traditional print and television journalistic institutions have struggled to remain relevant and profitable, despite the newfound freedom and opportunity presented by the internet age. Consequently, fundamental assumptions and expectations about the journalism industry have begun to crumble away; most notably, the notion that journalism is solely the domain of for-profit businesses. Thus, the industry has slowly become de-professionalized, with a growing understanding that “journalist” is not a protected class, but rather an action in which anyone can participate. In some instances, this has been a great benefit to the public good, with private citizens on-the-ground often being the first to bring attention to an issue.

These advantages of citizen journalism have made the practice inseparable from the successes of contemporary social movements. Even traditional media has played this role, where editorial hierarchies have allowed. As Professor Michael Schudson at the Columbia Journalism School argues, a fundamental role of journalists is to empower individuals and groups to demand their liberation: “Journalists are reluctant stewards for democracy, because they believe democracy makes citizens their own stewards.” Secondly, media members play an important role in focusing the messaging of any successful social movements. Social movements are designed to grab the attention of audiences. The media — at least when sympathetic to a cause —  can highlight these demands, and by consequence be an integral player in indirectly pressuring those in power to make policy changes. The existence of sympathetic media personalities has also been shown to strengthen the resolve of activists leading movements. For these reasons, journalists can at times be allies to social movements, allowing them to play a major role in their successes.

This is not a phenomenon that exists solely in the abstract. Practical examples of alliances between protesters and journalists can be found the world over. For example, journalists have been particularly valuable in their uncovering and publicizing of police brutality at protests and rallies. In 2009, a man died while participating in the G-20 protests in London. Although official police reports indicated no foul play on the part of the officers, eyewitnesses stated otherwise. A journalist working for The Guardian, Paul Lewis, conducted interviews with those present and consolidated video evidence, pointing to major holes in the official police account of events. This additional layer of accountability would not have been possible had trust not been established between protesters and sympathetic journalists.

Moreover, the second role fulfilled by journalists — using their platforms to recruit sympathetic allies — can be observed throughout the so-called “Arab Spring.” Throughout these uprisings, individuals equipped with digital cameras and cell phones would chronicle protests as they happened, even disseminating video of Mohamed Bouazizi’s self-immolation, the opening event of the revolutions to follow. These individuals unknowingly played the role of journalists, in countries where press freedom continues to be far from guaranteed. These citizen journalists were arm-in-arm with protester allies, and directly contributed to the informational cascade that caused the protest to spread from Tunisia, to Egypt, and finally, to Syria.

In the Canadian context, the best protest journalists bring attention to underreported issues, and highlight where our justice system has failed. Journalists and grass-roots reporting by community members have played a large role in raising awareness of Indigenous issues in the collective consciousness of settler Canada. For example, it was reporting conducted by journalists and indigenous activists that revealed the RCMP was prepared to utilize lethal force against Wet’suwet’en land defenders in late 2019. RCMP officers were also given the authorization to use “as much violence” as they wished to break through the Wet’suwet’en blockade. This kind of reporting would not be possible without journalists being allowed to carry out their work on-the-ground, and being able to whistleblow when incriminating evidence is presented to them. The work of journalists covering Indigenous issues has not gone unnoticed by Indigenous communities: according to Pamela Palmater, Chair of Indigenous Governance at Ryerson University, these journalists advance the goal of reconciliation with Indigenous peoples where the government fails or acts in bad faith.

Power to the people

Journalists play an integral role in the success of protest movements. This is based on a broadened interpretation of what a journalist is: no longer a strictly defined profession, and instead any person engaged in good-faith information gathering for public consumption. These new approaches to journalism have ushered in a new era of public accountability, with new technologies allowing for greater public knowledge of state abuses of authority. Not only does this access empower individuals, but it also allows for the rapid spread of a movement, as seen in the example of the Arab Spring, and more recently, the George Floyd uprisings and Indigenous movements across Canada.

With these factors considered, the importance of journalists can not be understated. Ensuring the rights of journalists at protests is not only a matter of principle — it is also a question of pragmatic cost. Doing the work to guarantee journalist presence at protests means that the issues of justice being fought for can be tried in the court of public opinion — a far more cost-effective method than the courts of law.