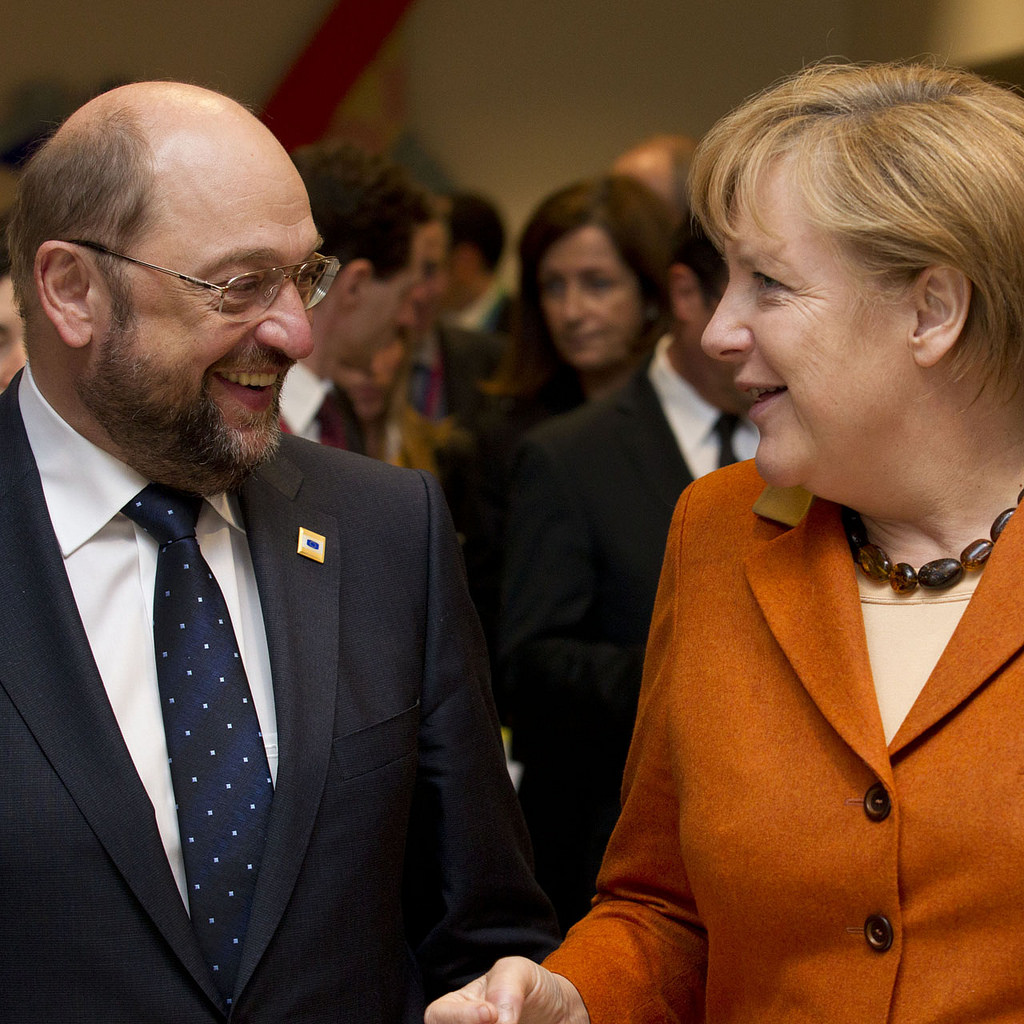 Europe’s political world was shocked to learn that Christian Lindner, head of Germany’s Free Democratic Party (centre-right), had walked out of coalition negotiations with the Christian Democrats of Angela Merkel and the Greens. “It’s better not to govern, than to govern badly,” Lindner claimed. Critics allege he had planned this move from the start, and accused him of opportunism. Germany usually manages to hammer out strong coalitions relatively quickly, but now the way forward is unclear.

Solutions are few as the only other possible coalition is to continue the last term’s grand coalition between Merkel and the main centre-left party, the Social Democrats. Yet, the latter declared on Election Day that they would stay in opposition, as their recent stints governing with Merkel have robbed them of a distinct identity and led to catastrophic electoral results.

There could be another election, but polls suggest it would yield the same result. Finally, Merkel could form a minority government, but it would be an exceptionally weak one, controlling only one-third of the seats in parliament and unlikely to stem the tide of anti-establishment radical parties. She is currently negotiating with the Social Democrats, so that the latter might shield her government from being overthrown without formally joining cabinet. Suffice it to say, everybody involved is unhappy with this.

Every aspect of this crisis is tied to a major flaw of proportional representation (PR), which Germany uses – from the Social Democrats’ anguish over grand coalitions, to the mainstream’s desperate scramble to keep extremists out, to how all of this is negotiated behind closed doors. These problems would be avoided if Germany had preferential voting.

Elections are about choosing governments

At the most abstract level, a government should only be sworn into office and be empowered to make decisions if it has the support of over 50% of the people. Especially in large, diverse polities with a wide spectrum of beliefs, any attempt to create a majority involves making compromises, both in issue positions and in priorities. In majoritarian systems, the major parties make these compromises before the election, assembling heterogenous “big tents” that hope to secure 50% of votes. In proportional systems, the numerous parties make compromises after the election in the form of coalition negotiations. Its logic is that since seat share mirrors vote share, any government that commands a majority in Parliament must also have the support of a majority of the general public. However, reality does not necessarily bear this out.

An example of this may be taken from September’s election results in New Zealand. Due to its PR system, election results were also inconclusive on election night – neither the centre-right National Party nor the Labour-Green coalition had a majority and both needed the support of the nationalist New Zealand First party. Thus, for three weeks, the country’s political future lay in the hands of Winston Peters, who had created NZ First as a personal party and could make whatever decision he wished. For three weeks, commentators attempted to pry into his mind, looking through his political history, personal grudges, and desire for a legacy to figure out who would end up being the new Prime Minister.

Left out of this process was the Kiwi electorate; their opinion could only be divined through opinion polls. What government a majority prefers would seem like an incredibly important measure in a democracy, but PR offers no way of measuring it, much less ensuring it. Who became Prime Minister of New Zealand was instead a function of which side was willing to concede more principles behind closed doors, who offered better Cabinet positions, and the peculiarities of Winston Peters’ psychology.

In other words, in PR, voters can choose between parties but have no say in the coalition agreement that actually decides how the country is governed. This is not a trivial distinction; New Zealand voters were fortunate in that Peters’ arbitrary decision process happened to result in a Labour government, the outcome that a majority probably wanted.

Others have been less lucky. 25% of Dutch voters chose Labour in 2012, only to watch them then form a coalition with the centre-right Liberals. The fact that Labour’s polling quickly collapsed to 8% showed that Labour voters were really not happy that their vote had led to continued right-wing government – but they had no recourse to correct it for another five years. Similarly, the UK Liberal Democrats’ polling immediately dropped from 25% to 10% after their 2010 coalition agreement with the Conservatives. These coalitions, then, never had the support of a majority of the population, even if the individual parties did.

In the same way, the coalition-formation process in Germany has been insulated from democracy. Those who voted for the Free Democrats likely expected them to be friendly to Merkel (as the two had been natural allies through most of postwar Germany); Lindner’s decision to torpedo talks (likely) for personal gain would have come as a surprise. Meanwhile, within the Social Democrats, the ultimate decision to negotiate with Merkel or rebuild in opposition is being made through the party’s arcane factional struggles.

The Peril of the Grand Coalition

The grand coalition is another feature unique to PR, and it poses a significant problem for democracy. PR countries are more likely than majoritarian ones to see far-left and far-right parties enter parliament, and their very existence makes the formation of a majority government more difficult. At a theoretical level, PR supporters might argue that this forces mainstream parties to negotiate with those discontent with the status quo, and this has indeed happened in some countries. But other countries instead see mainstream parties band together and erect a cordon sanitaire against extremists.

Germany’s mainstream parties mostly refuse to negotiate with either radical-left or radical-right. For this reason, two of the past three federal governments have been grand coalitions, and talks between the two parties are again underway. But another grand coalition would be a terrible outcome, for any democratic government depends on the existence of a “loyal opposition” that could, at any moment, form an alternative majority as soon as voters tire of the government in place.

For this reason, Merkel’s main challenger in the elections was unable to convincingly criticize her, for his party had been in cabinet and bore responsibility for its record. This meant that voters were given options but no power – their choices were to vote for Merkel, a party that had just collaborated with her, two minor parties who were likely to collaborate with her, or radical parties. A credible alternative was clearly desired, but the nature of coalition politics meant that none was available.

The collapse of German negotiations is all the more ominous, since Germany is the only first-world country to consistently marry stability, proportionality, and a population larger than Canada’s. (France and Italy abandoned PR due to instability; Turkey, Spain, and Poland use systems with significant distortions).

Indeed, it is possible that the twin phenomena of dealignment and of mistrust of the “establishment” have fundamentally changed how (or if) PR systems function. Germany’s recent (and problematic) reliance on grand coalitions, for example, was not intended as a feature of the system; for decades they were not necessary, as one major and one small party could always form an ideologically coherent government. Party fragmentation has changed the calculus: this year saw the first negotiation involving three parties (four if the conservative “sister parties” are counted separately), as well as the first negotiation ever to collapse. Should the latest talks conclude in a Merkel minority government, this too would be an unfortunate first.

Similarly, the Netherlands has always functioned well because its three major blocs (Christian, socialist, liberal) consistently won 75% of votes, but this system has fragmented. 2017 saw the first-ever four-party coalition, following the longest negotiations in Dutch history. The Spanish election of 2015 was the first ever to require a repeat; only after ten months and the overthrow of the opposition leader was a very shaky minority government able to form. Ireland’s minority government is also historically shaky and requires herding a large group of independents. No majority is in sight following last month’s Czech elections, while Italy’s next elections are likely to plunge the country into a state of ungovernability. PR advocates often respond to claims of instability with “plenty of countries do it fine” – but perhaps this is an argument that only holds with pre-1990 voting behaviour.

Meanwhile, last month’s elections in the Australian state of Queensland, which uses a preferential system, provides a better method of assembling majority coalitions. Polling showed that neither Labor nor the Liberal National Party (LNP; centre-right) was close to winning 50%, while the radical-right One Nation party held 15-18% of first-preference votes. Consequently, the LNP suggested to their voters to rank One Nation as their second preference while also adopting some of their rhetoric, in the hopes that One Nation would reciprocate. But this faced a backlash, for One Nation is reviled by a broad swath of the public; some cite the deal as a key reason for the LNP’s loss to Labor. As in any democracy, Queensland parties had to weigh the pros and cons of aligning with certain groups over others; the difference is that voters got to render their judgments on these alliances, as opposed to watching later negotiations from afar.

The preferential system and its cousin, the French two-round system, marry stability with numerous parties, while usually ensuring that the winning party is preferred by an absolute majority at a nationwide level. There are exceptions where the less-preferred party still wins more seats – but this could probably be fixed by the addition of leveling seats. (Variations exist within this category.)

Another possibility comes from Italy, whose 2015 electoral law featured a fascinating innovation: the election would be conducted by PR, but if no party wins 40% of votes, the top two parties compete in a runoff. The party that wins the runoff (and thus captures over 50% of preferences) is awarded a majority of seats, with the remaining seats allocated according to first-round vote share. The result is a government that is preferred to any other by a majority of Italians, but where smaller parties get a voice in parliament and a chance to become one of the major parties at a later point. Regrettably, the runoff provision was ruled to go against Italy’s constitution, but it provides an interesting possibility for other countries contemplating reform.

No such talk of reform has surfaced in Germany. To be sure, Germany will figure out an end to this crisis, and years from now, few will remember if coalition negotiations took one month or six. But over the long term, presuming all six parties are here to stay, the country’s political system has two options: one is to drop the cordon sanitaire and normalize negotiating with radical parties (as recently happened in Austria); the result is a two-coalition system, not very different from what would happen under majoritarianism. The other option is to stay the current course, where the major parties usually have no choice but to form grand coalitions in order to avoid utter chaos, depriving German voters of a meaningful choice and thus strengthening radical parties. Both options reflect poorly on the PR system’s ability to encourage stable, coherent governments.