Fear, Corruption, and Apathy: The Struggle for Nigerian Democracy 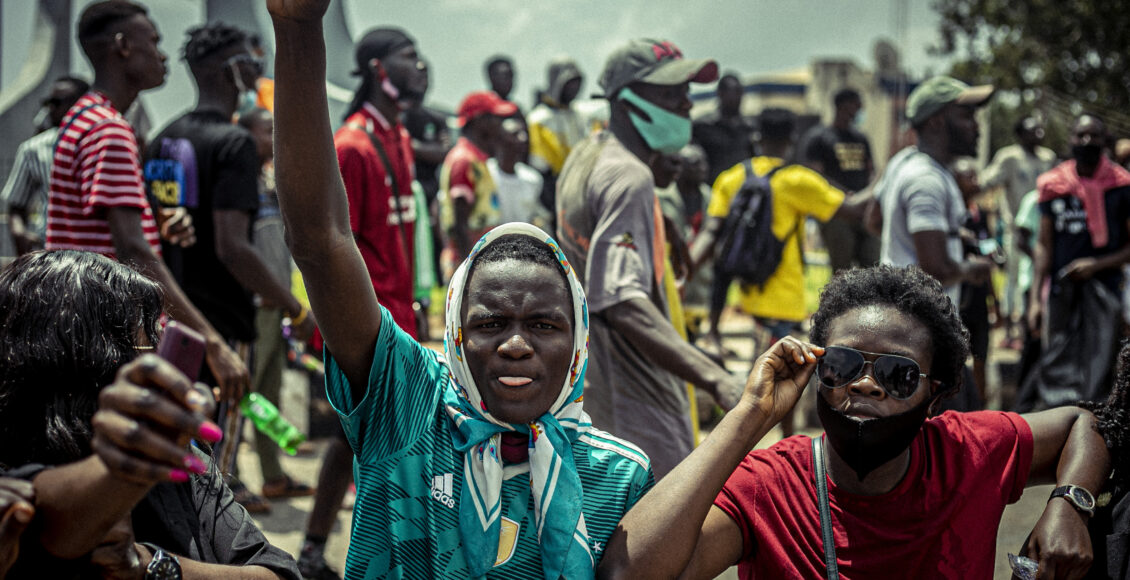 When he was sworn in as President of Nigeria in 2011, Goodluck Jonathan declared that a “hunger for democracy” had swept the nation. He promised to fix the issues that had plagued Nigeria for decades, like rigged elections, familial scandals, and a history of little transparency, stating that “the bane of corruption shall be met by the overwhelming force of our collective determination, to rid our nation of this scourge.”

Upon his departure from office in 2016, Jonathan was speculated to have allowed $32 billion USD to be lost to corruption, most notably in cases surrounding the oil industry. Nigerians today face many of the same problems that Jonathan campaigned on defeating, including the unchecked presence of the radical Islamist terrorist organization Boko Haram. However, the most significant struggle the nation faces remains its “hunger for democracy” – or, more aptly, the flickering hope of it.

SARS and the climate of fear

Though it has been independent since 1960, Nigeria officially celebrated the beginning of its democracy in 1999. However, it was not until 2015 that the country saw its first relatively free and fair election; in 1999, 2003, 2007, and 2011, widespread accounts of voter fraud and violence plagued the country. Even in the most recent 2019 election, observers reported vote-buying, voter intimidation, and violence, all of which likely influenced its outcome.

Nigerian elections – and Nigerian politics in general – are defined by these trends, and it is increasingly evident that a climate of fear is constricting the democratic process. The often-overlooked Special Anti-Robbery Squad (SARS) exemplifies this: established in 1992 as a special armed forces division, SARS has become a symbol of oppression and fear in the nation, harassing, torturing, and executing civilians without proper judicial process. To date, no SARS officer has been held accountable, and the organization has continued its reign of brutality.

In October 2020, protests against the movement escalated when footage of SARS officers’ “unprovoked killing” of a civilian went viral. Denial from political and military officials in Nigeria sparked further outrage, prompting the viral #EndSARS social media campaign and nationwide protests. Later that month, President Muhammadu Buhari committed to terminating SARS and reforming the police system, a move that many had hoped would close the chapter on the story of the tyranny of SARS.

In reality, promises by Buhari to address accountability and violence issues within the police force have been vague, with many criticizing his lack of decisive actions in addressing systemic issues. As recently as October 2021, accounts of police harassment, violence, and their association with SARS have surfaced. Buhari’s call was the fifth time since 2015 that officials in Nigeria had promised to disband SARS; his failure marks the continuation of Nigeria’s long-running tradition of false promises and disregard for its population.

The perpetual state of fear and unsuccessful attempts at change have become pivotal in enhancing the most dangerous threat to Nigeria’s democracy: voter apathy. This lack of care by voters manifests through low turnout numbers, particularly in 2019. The presidential election witnessed the lowest turnout in Nigerian history, as only a third of eligible voters cast their ballot; in legislative elections held in 2021, some states saw numbers as low as three per cent. Despite record-setting spending and the promise of the fairest election in history following the success of democracy in 2015, the voting process in 2019 and regional races have not managed to capture the “hunger for democracy” described by Jonathan.

Though violence was a factor in the low turnout, 2019 was a relatively peaceful election. The reason for the limited participation shifted from violent repression and towards a lack of confidence that the government would ensure a fair election. Many citizens did not trust that their votes had counted before, and little has been done to convince them that this would not be the case again. Election Observer Chioma Agwuegbo told Al Jazeera, “Voters, especially young people, feel betrayed by the electoral commission.”

“This is not a rejection of democracy, but a protest against bad governance,” said senior programme officer at the Centre for Democracy and Development Austin Aigbe to Nigeria’s Premium Times, which recorded that “observers and citizens alike have told this newspaper that the plunging rate of election turnout is largely due to years of failed electoral promises, electoral violence, distrust in the electoral processes and torturous registration process.”

Democracy survives when its voters believe and participate in the system; in Nigeria, the history of violence, lack of change, and inability to ensure fair elections has pushed voters to believe that democracy is broken — and they are right. The world’s fourth-largest democracy has failed its people time and time again, and the hope that Nigeria’s democratic system can be saved is at an all-time low. The underwhelming actions of the Buhari administration have allowed Boko Haram to expand and corruption to grow. As regional cleavages continue to create disunity, the question of stability is at the forefront of many voters’ minds.

Buhari’s consistent failure in handling the multitude of issues threatening Nigerian democracy and fueling voter apathy is disheartening. Confidence that Buhari can deliver on his promise of efficiently tackling corruption is marred by incidents of corruption in his own administration. More specifically, trust in Buhari has been shaken by his lack of investigation into these cases, some of which have even been caught on camera yet continue to be swept under the rug.

Despite these obstacles, democracy in Nigeria has still advanced in certain regards. Buhari has taken steps in the right direction: initiatives like the Treasury Single Account and Bank Verification Number and updated whistleblowing policies give hope that Nigerian leaders will continue to push for anti-corruption measures. Increased spending in the 2019 elections demonstrates a desire by political parties to rally voters, boosting participation in the democratic process. Heightened satisfaction by the population in the conduct of the election indicates that many still have hope for the future, and the unification of young voters in the #EndSARS movement encapsulates the still-present passion by citizens to speak out for their beliefs. Though slow, the struggle to save democracy in Nigeria is real and alive.

Voter apathy and the lack of civilian protection by the government make the hope that Nigerian democracy can succeed bleak. However, the fight for democracy persists. As Jonathan described in his inauguration speech: “Such determination derives from the typical Nigerian spirit of resilience in the face of the greatest of odds. That spirit has, over the years, stirred our hopes, doused our fears, and encouraged us to gather ourselves to build a strong nation even when others doubted our capacity.” Endurance is perhaps Nigeria’s most defining attribute, and looking to the future, there is a path for true democracy in the nation so long as that “Nigerian spirit” remains.